BreakPoint: Abortion Extremists on the Left - Breakpoint
Help others see truth, beauty, and goodness. Give today.
Skip to content 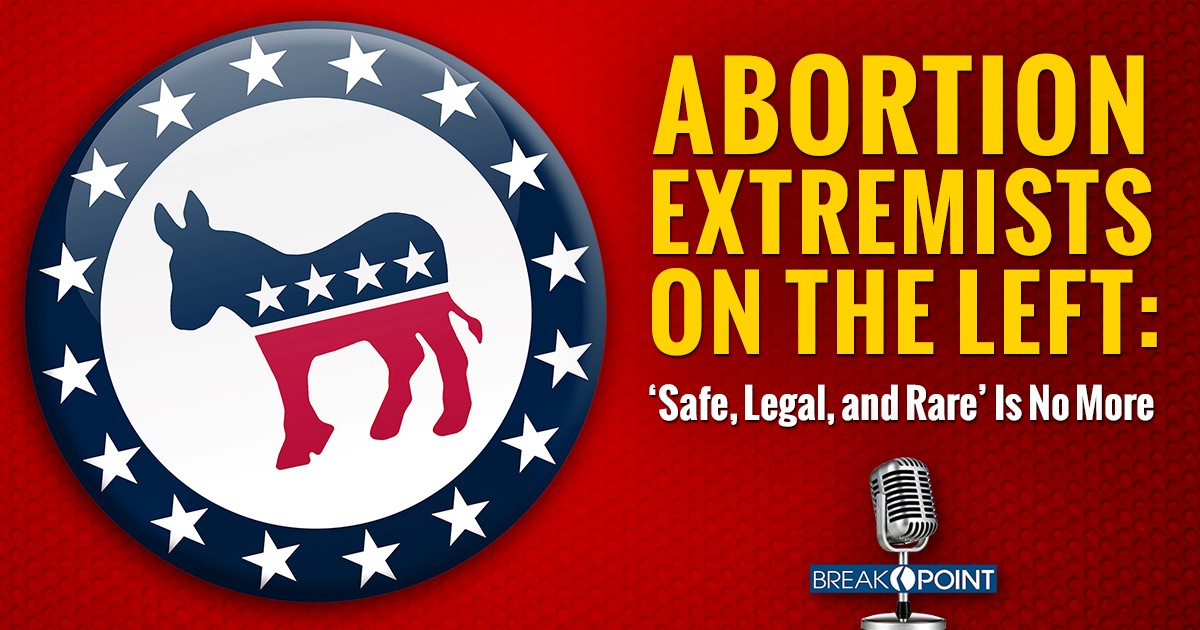 
BreakPoint: Abortion Extremists on the Left

Last week probably marked a milestone in American political extremism. For more than forty years, former Vice-President Joe Biden held what he called a “middle-of-the-road position on abortion.” He backed bans on late-term abortions and voted more than fifty times on Capitol Hill to uphold the Hyde Amendment, which prohibits federal funding for abortion. Writing at The Washington Post, Marc Thiessen notes how that middle-of-the-road position has, at least in the last few years, made Biden something of a dinosaur among Democratic leaders. (That’s not an age joke, by the way.) To put it bluntly, the former Vice-President was one of the last high-level representatives in the Democratic Party of an older liberal view on abortion. Not that long ago, abortion was proclaimed, by the political left, a necessary evil to be used in extreme circumstances—you know, “safe, legal, and rare.” I say Biden “was” one of the last, because just days ago he caved to the extreme abortion lobby that now drives the Democratic Party. He dropped his support for the Hyde Amendment. This happened after a backlash from fellow Democratic presidential contenders. Senators Bernie Sanders, Kamala Harris, and Elizabeth Warren all tweeted their outrage at Biden’s “moderate” position. They were joined by organizations like Planned Parenthood and NARAL, all demanding federal funding for any abortion as a matter of women’s rights. Biden’s surrender came just before another presidential contender, New York senator Kirsten Gillibrand, compared pro-life views to racism and antisemitism. Speaking with the Des Moines Register, Gillibrand said, “I think there’s [sic] some issues that have such moral clarity that we have as a society decided that the other side is not acceptable.” That’s no minor statement. For forty years, pro-lifers and pro-choicers have fought viciously over abortion. Pro-lifers were called “religious,” and “hypocritical,” and “wrong.” But unlike other issues today, pro-lifers were not dismissed from polite society as “evil.” Well, at least until now. Still, as Thiessen points out, the percentage of Americans who think abortion should be available at any time during pregnancy for any reason is a small minority—only about 13 percent. By contrast, a new Marist poll commissioned by NPR and PBS found that a super majority of Americans—75 percent—support some restrictions on abortion and oppose federal funding. Apparently, Biden has joined the rest of his party’s leadership by giving in to the extremists. As Ryan P. Burge at Eastern Illinois University points out, the General Social Survey reveals that until the late 1980s, the two parties weren’t that far apart on the abortion issue. Up till then, only about a third of Democrats and Republicans supported abortion for any and all reasons. But then something happened, and the parties diverged dramatically. What that something was is anyone’s guess, but looking at the hockey stick graphs, one thing is clear: Republicans today are more opposed to abortion and Democrats more in favor of it than ever before. The country is unquestionably polarized. Democratic Party leaders have shifted more quickly and more dramatically than their voters. By celebrating killing as a positive and liberating thing, they have abandoned the position most Americans still hold—that abortion should be legal but heavily restricted. That’s not to say that’s a right position, or that there’s any kind of moral equivalency between the sides on this issue. Intentionally killing an unborn child is always wrong. But as President Trump showed recently when he (wrongly) criticized Alabama’s new abortion law, it’s still possible within the party to be a moderately pro-life Republican officeholder. But it’s not possible anymore to be a moderately pro-abortion Democratic officeholder. Remember that the next time you see a headline or find yourself in a conversation about those “pro-life extremists.”     Download  mp3 audio here.