BreakPoint: Automation and the Dignity of Work
Give today to learn what it means to be a thoughtful Christian!
Skip to content 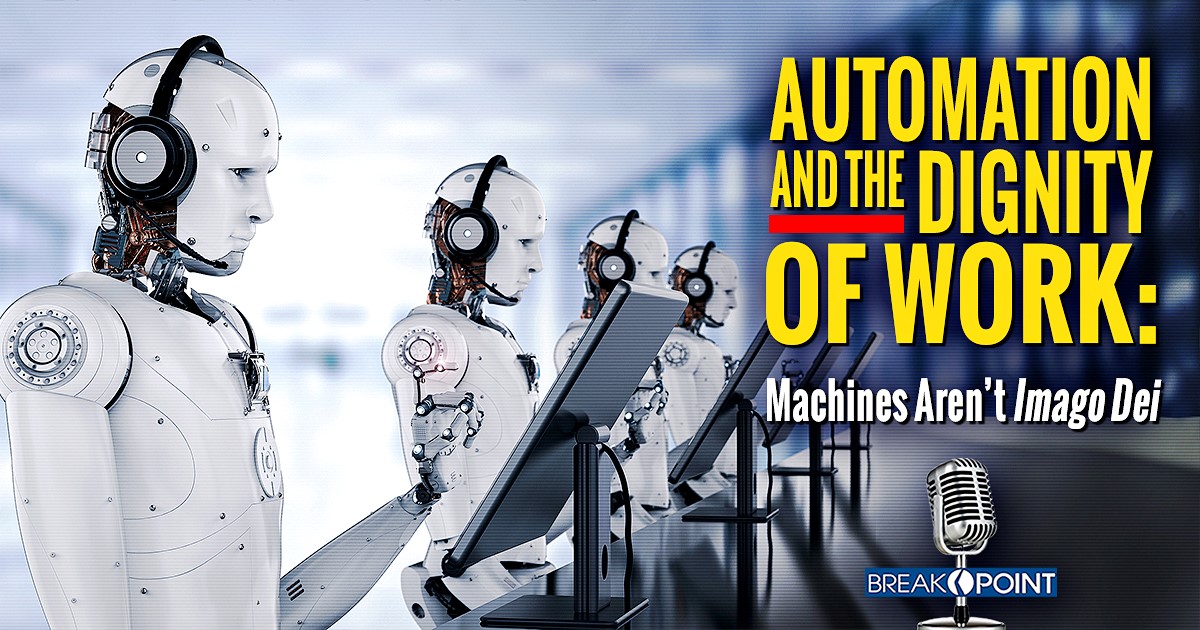 
BreakPoint: Automation and the Dignity of Work

We’re in the middle of a revolution that could prove as disruptive as the Industrial Revolution. What does work look like in a world of automation? Recently on "Saturday Night Live," John Mulaney observed that we spend an awful lot of our time these days proving to robots that we aren’t robots. This brave new world is not just online. Grocery shopping in the last five years makes many of us wish for the good old days with real, live human cashiers. For many employers, of course, the advantages of machines over human employees is obvious. Former fast-food executive Andrew Puzder explains why: Machines are “always polite, they always upsell, they never take a vacation, they never show up late, there’s never a slip-and-fall, or an age, sex or race discrimination case.” To employers, automated employees may be a dream. But to employees that are being replaced, it’s a nightmare. Writing at Market Watch, Elizabeth Beyer reports that up to a third of able-bodied American men between the ages of 25 and 54 could be unemployed within thirty years. A recent Gallup poll indicates that around 37 percent of millennials are at a high risk of losing their jobs to computers or machines. Certain groups will be hit even harder. Darrell West, vice-president of the Brookings Institution, predicts that technology and artificial intelligence could leave up to half of young African American men without jobs by 2050. These numbers represent real people who will suffer real hardship when they’re displaced by technological surrogates. They not only face the struggle to feed their families; they face the struggle to adjust and to retrain in order to find employment. Few things are more mentally distressing or humiliating than losing your job, especially if it’s to a piece of impersonal equipment. Now many over-hype the negatives of automation. Technological strides like this are nothing new, and throughout history have almost always made life longer, healthier, more productive and more convenient for everyone. At least that’s true in the long run. But in the short run, it can hurt. And Christians should be more aware of this and prepared to help our neighbors than anyone else. Here’s where I stop talking economics and start talking worldview. Paychecks and food on the table, as Jesus might say, are things our Heavenly Father knows we need. But we also need something else. Humans need to work. We’re made to work. Even if machines could do everything for us, we shouldn’t want them to! Think of the seemingly-benign technological dystopia from Pixar’s “Wall-E,” where machines wait on doughy, listless people lost in an endless stream of entertainment. This isn’t what it means to be human! Genesis makes clear that God created and commanded man and woman to subdue the earth. The creation mandate means that even if we lived in a world without sin or the curse, we’d still have work to do! If we Christians ever find ourselves in a time when automation, robots and machines have people lining up at the unemployment office, we must offer more than just money. Christians should be first to recognize that the unemployed need the dignity of expressing their created identity as image of God through work. By doing so, we reflect and honor the work that God did Himself when He created the world. Historians look back at the major disruption across societies as we moved from a primarily agrarian society to an industrial one. We are in the midst of a similar disruption, as we move from a society centered on industry to one centered on information and automation. Our world will look different than it did in the past, and even than it does right now. But no matter how much technology changes, it’s people, not machines, who bear the image of the God who forever dignified and blessed work. If we start there, we’ll have more to offer the world than any robot does.   Automation and the Dignity of Work: Machines Aren’t Imago Dei As John highlights, only humans bear the image of the God who created us. He has given us the ability to do work both physically and mentally, and we need to acknowledge the dignity derived from work, helping those whose jobs have been taken over or even eliminated due to changes in technology.