Christopher Yuan on Holy Sexuality - BreakPoint
Join us in helping to equip and renew the Church with a Christian worldview by giving before our fiscal-year ends!
Skip to content 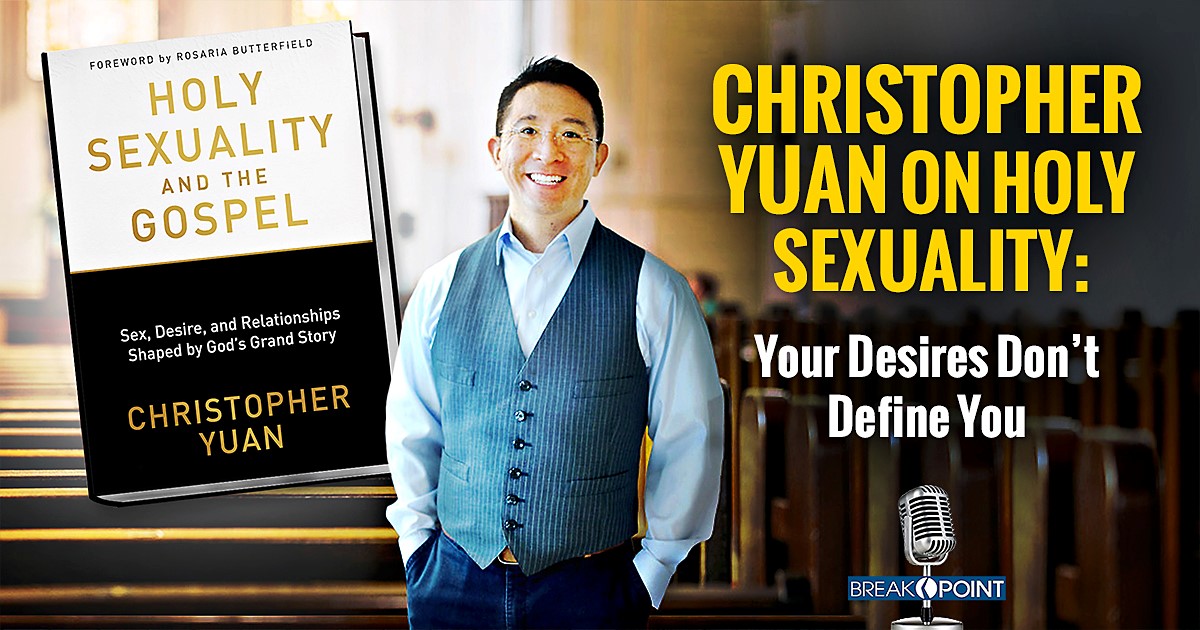 There’s a line credited to C. S. Lewis that I often repeat: “The most dangerous ideas in a society are not the ones being argued but rather the ones that are assumed.” In our time, that saying perfectly describes the idea that our desires determine our identities.

Our culture has fully trained people, when they talk of sexual desires, to not say “I feel,” but rather to reach for being verbs like “I am.” “If I experience same-sex attraction,” they’ll say, “therefore I am gay.”

He knows. For years, Yuan self-identified as a gay man and lived an incredibly broken life. He was kicked out of dental school on the eve of graduation for selling drugs to faculty and threw away his relationship with his Christian converted parents in favor of gay bars and the life of a dealer.

At one point, Yuan says his father even handed him a Bible, and he chucked it in the trash can. Not long after, he found himself in prison, where he received the life-altering news that he was HIV positive. Yuan recounts catching sight of another trash can while incarcerated and thinking to himself, “This is my life.” But then he noticed something on top of that trash can: a Gideon’s Bible. He picked it up and began to read it, at first out of boredom, but later with growing interest.

After wrestling with Scripture and trying to reconcile it with his choices and sexual identity, Yuan came to a crossroads: either to let his attractions determine how he lived, or to find his identity in Jesus. By the grace of God, Yuan chose Jesus.

Today, having taken the unlikely course from prisoner to Bible professor, Yuan emphasizes the need to rethink along the lines of what Scripture teaches. For example, something most Christians know by experience: Conversion doesn’t end temptation. The battle with what the Apostle Paul calls “the flesh,” remains, including when it comes to our sexual desires. That’s why Yuan has chosen to think with different categories. As he says, the goal of the Christian life isn’t to become heterosexual, it’s to become holy—whether we pursue that through lifelong celibacy or in marriage.

Holiness is the subject of Yuan’s latest book, which is the Colson Center’s book offer for the month of April. In the book, “Holy Sexuality and the Gospel: Sex, Desire, and Relationships Shaped by God’s Grand Story,” Yuan subjects the issues surrounding sexuality to the bigger questions—those questions that shape our worldviews, which in turn shape our lives. Questions like, “What is sexuality for?” “Why do we have desires?” and “What’s the purpose of marriage?”

Yuan offers answers that are not only grounded in Scripture, but that also debunk the lies of our culture—lies like, “abstaining from sex is impossible,” or “unconditional love means unconditional approval,” or the biggest lie of all, “I am the sum of my desires.”

“My identity,” writes Yuan, “is not gay, is not ex-gay, is not even heterosexual…my identity as a child of the living God must be in Jesus Christ, alone.”

Out of his clear thinking about sexuality and personhood, Yuan offers advice for those who have a loved one who confesses a struggle with same-sex attraction. He tells readers first to acknowledge that trust, and to let that son, daughter, sibling, or friend know up front that they’re not alone—that you will walk with them, love them, and pray with them no matter what.

Yuan boldly affirms what the Bible affirms about homosexual behavior. It’s a sin, he writes, one whose destructive power he knows all too well. But he refuses to shackle people to the embedded ideas contained in words like “gay,” “straight,” “bi,” “trans,” or any of the other labels our culture uses to reduce people down to their desires.

To get a copy of “Holy Sexuality and the Gospel,” come to BreakPoint.org and we’ll tell you how. We’ll also link you to other resources to help you love, walk with, and pray for those who are struggling with same-sex attraction.