Could This Beauty Be for Us? - Breakpoint
What makes the Church essential? Click here to learn more.
Skip to content 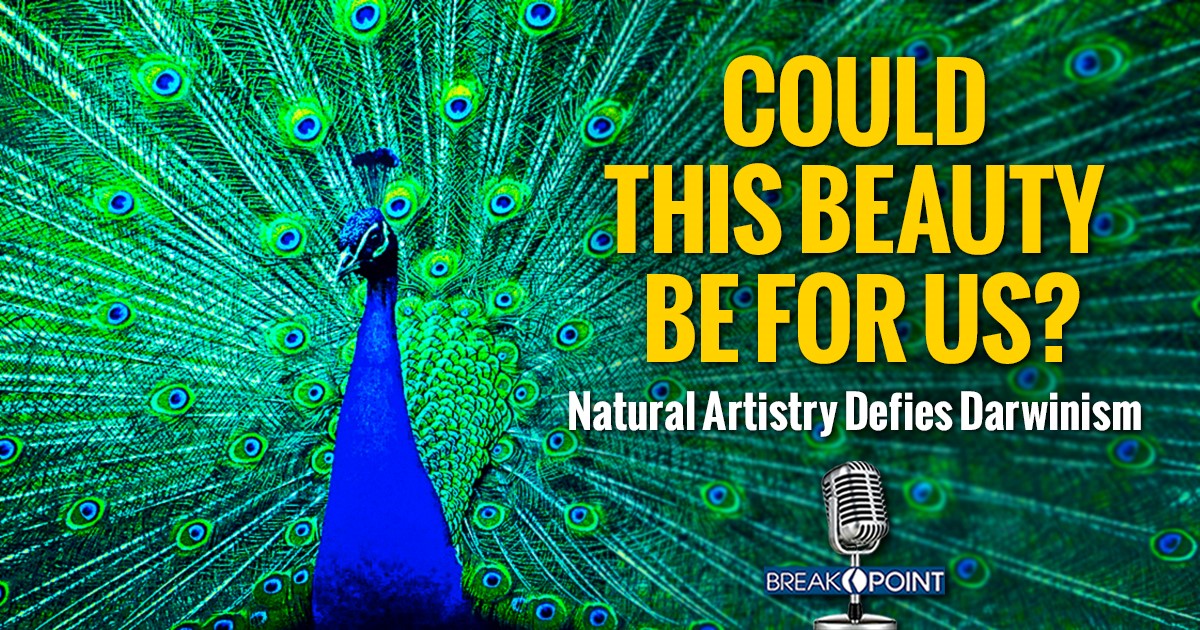 
Could This Beauty Be for Us?

The wings of a bird, the colors of a butterfly, and the patterns on a seashell defy the theory of Darwinian evolution. Many of us intuit, simply by looking at the splendor that permeates the natural world, that there must be some agent involved other than blind mutations or mere survival-of-the-fittest mechanisms. And now, it seems, some scientists are beginning to accept that intuition, finally admitting that beauty cannot be explained by the theory of evolution, at least as we know it.

In a surprising article in The New York Times, Ferris Jabr writes about a small but growing band of scientists who argue that natural selection alone can’t account for the eye-popping artistry we see in nature. He cites Yale ornithologist Richard Prum, who argues in his book, “The Evolution of Beauty,” that the elaborate plumage and outrageous mating displays of many birds confer no obvious survival advantage. Instead, they often put these birds at a disadvantage, wasting precious energy and making them stand out to predators.

By all the conventional rules of evolution, such costly adaptations should have disappeared long ago. Instead, says Prum, we find them all over nature, not only in birds, which play their wings like violins, but in beetles with high-fidelity, crystalline scales, fish with flags for tails, and a whole assortment of mammals sporting over-the-top headgear. Our world is bursting with unnecessary beauty that Jabr describes as “an affront to the rules of natural selection.”

Now, the traditional explanation for aesthetically awe-inspiring traits is that they show off an animal’s fitness to potential mates. The parrot with the brightest plumage might have the healthiest immune system. The lion with the bushiest mane must be the most successful hunter.

But more and more scientists are challenging this so-called “good genes” theory. Many natural ornaments, like the flamboyant tail of the peacock, put their owner in serious danger without necessarily signaling genetic fitness. Yet peahens (or the females) keep picking the fellahs with the biggest, brightest tails to sire their offspring.

While many scientists insist that somehow a cumbersome caboose confers a survival benefit, Prum thinks that’s ridiculous. Animals are beautiful not because beauty is useful, he insists, but because…they like it! Through a process called “sexual selection,” Prum and other experts now believe animals shape their own evolution, choosing features in mates that strike their fancy, and exaggerating these over countless generations to produce colors, shapes, and behaviors that dazzle human observers.

Now, maybe animals do like being beautiful, but that seems as much a forced theory as the one it replaced. I’m glad some Darwinists are recognizing that survival alone can’t account for the art gallery we call the natural world, but is it really a better option to look at that same art gallery and conclude that the paintings produced themselves?

Well, here’s another option… Recently, Evolution News reported on a peer-reviewed study by scientists in Spain that suggests that just seeing natural designs improves human engineers’ creativity. The researchers created a program that “help[s] industrial designers find natural shapes that [are] both functional and aesthetically pleasing” by showing them the features of plants and animals.

This is just the latest in an emerging field called “biomimetics,” which literally means “copying life.” The paper uses the term “design” no less than 130 times and “agency” over 140 times. Considering this, plus Jabr’s outstanding piece in the Times, it’s fair to wonder if we are “approaching the threshold of design acceptance in science.”

I hope so. Faced with a natural world brimming with beauty and engineering, scientists should reconsider the dogma that all of this created itself. Instead, they should consider that the mind-boggling beauty we see around us was always intended for our eyes—designed by a master Engineer and Artist, to display His genius and glory through the language of beauty—in a language best understood not by peahens, but by people.

As Andrew Peterson sings, could the beauty before us…be for us? I look forward to the day when science joins Christianity in saying “yes.”