Divided Methodists - Breakpoint
Give today to learn what it means to be a thoughtful Christian!
Skip to content 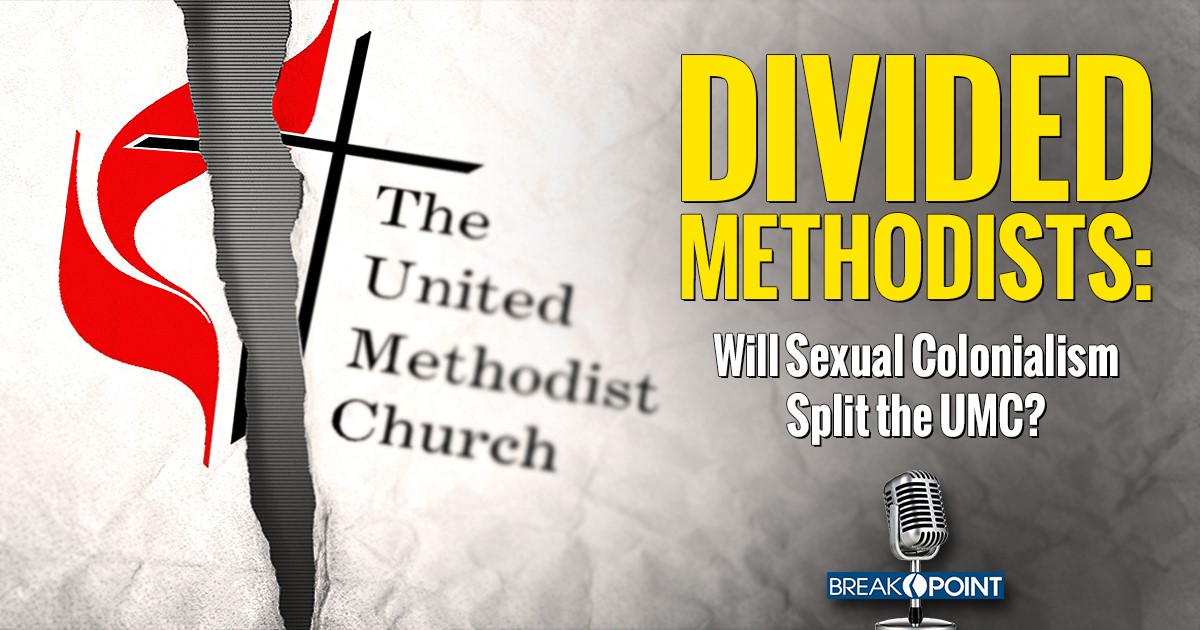 For generations, U.S. churches sent missionaries around the world, preaching the Gospel and planting churches in places such as Africa, South America, and Asia. Today, many of the millions of Christians and churches that resulted from those missionary efforts are more biblically faithful than their American forebears. This is especially true of certain denominations and certain issues.

Many mainline denominations stateside have exerted tremendous pressure on churches overseas to give up the 2,000-year-old understanding of the Bible and morality for the new sexual heresy. In doing so, they’ve been guilty co-conspirators with progressive governmental activists of a kind of ideological colonialism. And then, they act surprised when their actions create serious tensions and even splits in their denominations.

The tensions in one of the largest Protestant communions in the world, the United Methodist Church, has taken center stage this past week. So far, over 12 million Methodists—almost half of whom live outside the U.S.—have managed to hold together through years of often heated deliberation over sexuality and other issues. That may now change.

This week, over 800 delegates of the UMC General Conference convened in St. Louis to decide—among other things—whether to reaffirm the denomination’s historical stance on sexuality or to split over the issue. In the end, the Conference rejected two plans that would have accommodated sexual heresy at various levels and instead approved what is called “The Traditional Plan.” By doing so, the UMC chose to uphold marriage as between one man and one woman, and to strengthen disciplinary measures against churches that have departed from historic, biblical teaching on sexuality. Before the convention, many liberal churches threatened to leave the denomination if it took this path. We shall now see whether the Methodists are facing an Atlantic-sized split.

Thanks mostly to African Methodists, the UMC’s Book of Discipline already defines homosexual behavior as “incompatible with Christian teaching” and forbids openly gay clergy and same-sex “marriages.” That hasn’t stopped many American Methodists from pursuing and blessing LGBT relationships and activity, anyway.

Despite what you might hear, there is no question about who left who in this situation. Methodism’s biblically-minded founder, John Wesley, called Christians to holiness, but his liberal heirs fly rainbow flags, elect openly lesbian bishops, and  bless abortion clinics.

And, despite what you might hear, there is no question about where the future of Methodism lies. As NPR reports, membership in U.S. Methodist churches fell by 300,000 between 2014 and 2016. By contrast, the denomination is growing globally. Whether or not Methodism stays united, the future clearly belongs to the traditionalists.

Still, if liberal churches leave the denomination, it will cost the faithful churches abroad a great deal of financial support. Even so, don’t expect the international churches to cave to the promise of money.

Speaking at a breakfast on Saturday, Dr. Jerry Kulah, Dean of theology at the United Methodist University in Liberia, responded to this sort of threat in no uncertain terms:

“Africans are not children in need of western enlightenment when it comes to the church’s sexual ethics,” he said. “We do not need to hear a progressive U.S. bishop lecture us about our need to ‘grow up.’”

He concluded: “…the vast majority of African United Methodists will never, ever trade Jesus and the truth of the Bible for money.”

We need to pray for Christians like Dr. Kulah and the faithful members in all denominations who are feeling the pressure of sexual colonialism. Because as important as church unity is, the truth matters far more.