Millions of Frozen Embryos - BreakPoint
Join us in helping to equip and renew the Church with a Christian worldview by giving before our fiscal-year ends!
Skip to content 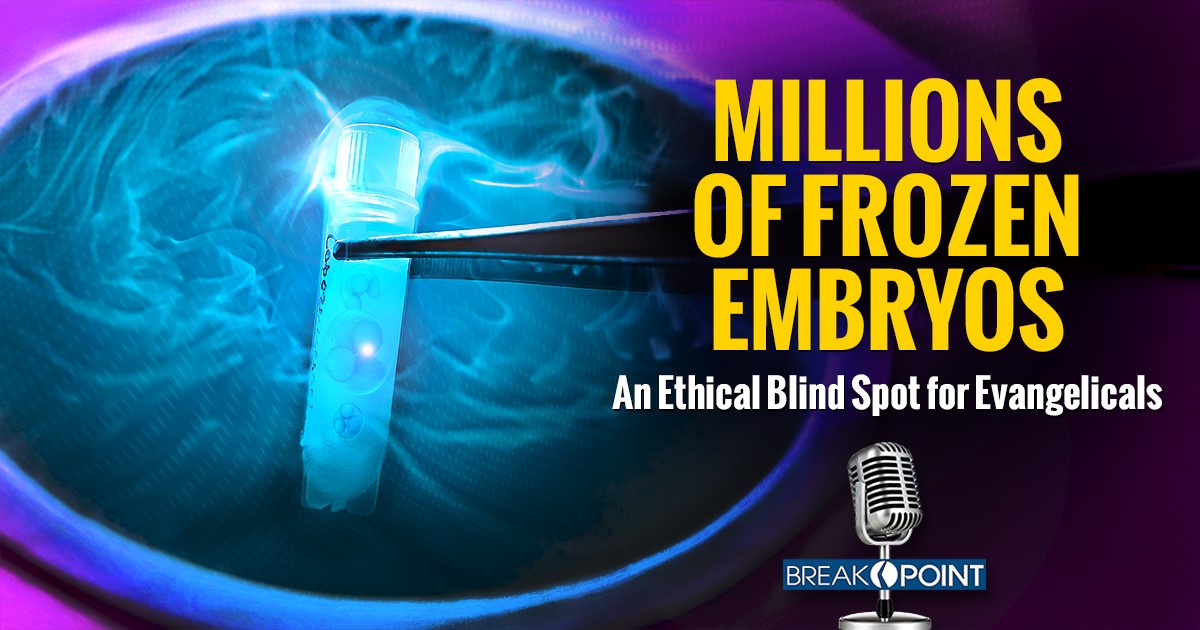 I’m unapologetically Protestant but, as I’ve said for a while now, our Catholic friends have long led the way on many bioethical issues like abortion and assisted reproductive technologies. For example, back in 2008, the Vatican released a document called “Dignitatis personae,” which said that “The desire for a child, while good, cannot justify the ‘production’ of offspring, just as the desire to not have a child cannot justify the abandonment or destruction of a child once he or she has been conceived.”

Now, I recognize that Christians disagree about whether it’s intrinsically wrong to conceive children outside of the sexual union of husband and wife, including in vitro fertilization. Because God ordered the pleasure and intimacy of married sex toward procreation, I find the Catholic ethical teaching against IVF to be compelling.

Still, like I said, not all Christians agree. For example, several months ago, I had a robust discussion on this issue on the BreakPoint Podcast with my friend Dr. David Stevens. David has long led the Christian Medical and Dental Society and has been one of the great medical missionaries of our lifetime.

What David and I did agree on, and what everyone should agree on (especially Christians), is that any fertility process that knowingly destroys or abandons human lives—including embryos—is immoral. And that’s what the debate over IVF must confront right now.

Recently, NBC reported that frozen and abandoned embryos in U.S. fertility clinics may now number in the millions. Because of how IVF has been done for so long, we are facing a human rights crisis—namely, what should we do with these little abandoned lives?

Throughout most of the history if the practice, in vitro fertilization has involved creating more embryos than any couple could ever bring to term. Standard practice is to retrieve scores of eggs per cycle from women and to fertilize all of them. A few of the resulting embryos are transferred one at a time to the gestational mother. Some may not implant. Some others may even be intentionally killed in reductive abortions. In other words, all-to-often this process involves destruction in the name of reproduction, justified because of efficiency.

And, what happens to the embryos not transferred? These human individuals are suspended in the earliest stage of development within tanks of super-cooled nitrogen. With modern techniques, they can survive this way for a long time. But for many of their parents, life moves on while storage fees add up. Once they have the children they want, their embryos are abandoned, to either sit indefinitely in the freezer or to die.

At one fertility clinic in Florida, a third of stored embryos face this fate. Because the CDC doesn’t require clinics to report the number of abandoned embryos, we have good reason to believe this is the case at clinics across the country.

Now, let’s be clear. By every scientific standard, embryos are living, genetically-distinct human individuals that just need the right environment, nourishment, and time to develop.

Given the scale of this overwhelming human rights crisis, the near silence about IVF in evangelical churches is inexcusable. How many pastors ever address this issue from the pulpit, or approach it in premarital counseling? How many uninformed Christian couples, in their laudable desire to have children, are using methods to create life that also destroy life?

There are clinics that use IVF methods that only involve fertilizing and implanting one embryo at a time. This type of IVF doesn’t result in excess embryos, and so it doesn’t destroy life. But how many Christian couples even understand the difference in these procedures?

Protestant pastors, this is a softball: It’s objectively wrong to bring human beings into existence knowing they’ll languish in a freezer or be discarded. In many cases, these embryos can be adopted. Google the Snowflakes Adoption Program to learn more.

Christians will have different answers to questions about the ethics of IVF. But in order to answer them, we first have to ask them. If we really believe that all human life is sacred, the technology behind this excess can’t remain a taboo subject, especially for the church.