The Empty Planet - Breakpoint
Give today to learn what it means to be a thoughtful Christian!
Skip to content 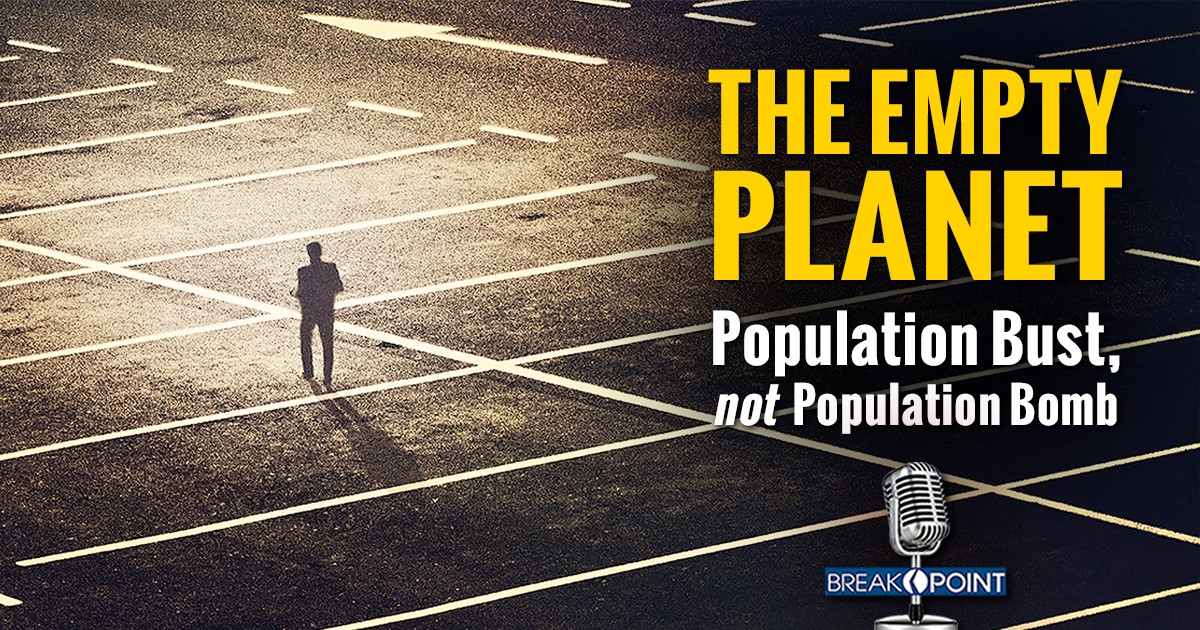 We’ve mentioned in the past on BreakPoint about “zombie abortion arguments.” You know, those arguments that just won’t die? They continue to be repeated long after they should have been “dead and buried.” Like zombies in movies, these arguments continue shuffling along, seemingly impervious to the reality that they are dead.

Abortion isn’t the only issue confused by “zombie arguments.” There’s a whole host of “should-be-dead-by-now” ideas having to do with so-called “overpopulation.” I say “so-called” because virtually every dire prediction Paul Ehrlich made fifty years ago in his book “The Population Bomb” was wrong. Spectacularly wrong, in fact. Yet Ehrlich’s ideas remain an article of faith among many—and I mean that literally.

In “The Walking Dead,” the only sure way to dispatch a zombie is with a headshot. Well, a new book should be the headshot for Ehrlich’s ideas. Unfortunately, many people’s worldviews harden to the point of becoming ideological kevlar helmets.

The book of which I speak is “Empty Planet: The Shock of Global Population Decline” by Darrell Bricker and John Ibbitson.

To be clear, there’s far more than one “shock” described in “Empty Planet,” but all of them flow from a single reality. Contrary to what people have been taught to believe for decades, “We do not face the challenge of a population bomb but of a population bust—a relentless, generation-after-generation culling of the human herd.”

As the Canadian duo documents, an increasing number of demographers around the world believe that the UN’s estimates, that human population will peak at 11 billion in 2100, are far too high. The more likely outcome, they suggest, is that “the planet’s population will peak at around nine billion sometime between 2040 and 2060, and then start to decline.” According to Bricker and Ibbitson, “Once that decline begins, it will never end.”

We talk a lot on BreakPoint about the decline of fertility rates in the industrialized world: Western Europe, Japan and the United States. We have described the dire economic and social consequences of this decline.

What “Empty Planet” makes clear is that this decline isn’t limited to the usual suspects. South Korea is headed down the same road to demographic catastrophe as Japan. Even more ominously, similar trends are emerging in the developing world. By the middle of this century, Brazil, Indonesia, China, and even India will begin to see their populations decline.

The reasons behind the decline are, not surprisingly, mostly cultural. In a brilliant bit of analysis, the authors point out that “as societies become more modern and urban, friends and co-workers replace siblings, parents, and uncles and aunts.” Families may put subtle and sometimes not-so-subtle pressure on young people to get married and have kids, but friends rarely do.

And then, there’s this well-established link between religiosity and fertility, something we’ve talked about before on BreakPoint.

Population decline is going to be a nasty shock, especially in the economic realm. Ideally, there should be about six workers for every retiree. Thanks to increased life expectancy and low birth rates, it is projected to drop to about three by 2050 and about two by 2100. We may live longer but there will be fewer of us, and our societies will be less dynamic, entrepreneurial, and creative.

Despite these realities, the myth of “overpopulation” refuses to die. Efforts to combat fertility and population growth, whether governmental policies or cultural incentives, are terrible ideas that threaten to make victims of us all.

Still, unlike Bricker and Ibbitson, I refuse to give up hope. Faith, especially Christian faith, is still strong in many parts of the world. And while that persists, there’s still a chance to avoid some of the “shocks” they describe in “Empty Planet.”

Otherwise a different, but no less real, zombie apocalypse awaits us.