BreakPoint: The Spiritual Battle on D-Day
Join us in helping to equip and renew the Church with a Christian worldview by giving before our fiscal-year ends!
Skip to content 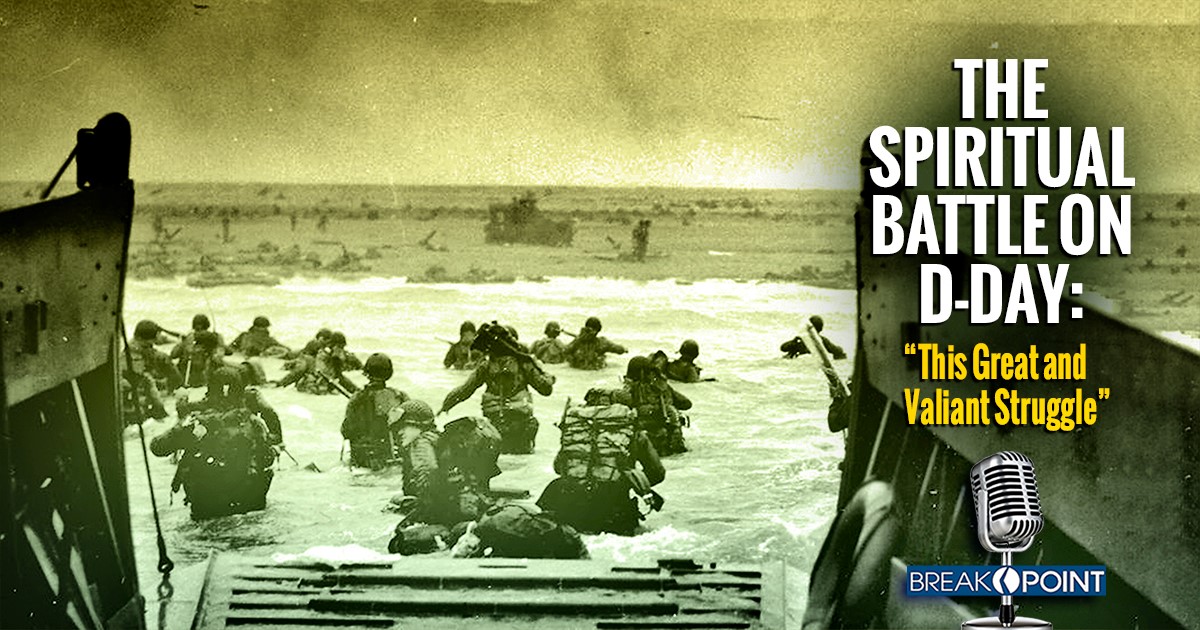 
BreakPoint: The Spiritual Battle on D-Day

Many of us know about D-Day through films like "Saving Private Ryan." But no film has ever told the story of another great battle that took place that day. June 1944. A tense and tired world is awaiting word of an Allied invasion of Western Europe, crushed for years under the jackboots of the Nazi war machine. In the early morning hours of June 6, the news flashes over American radios: The greatest amphibious invasion in history has begun on the beaches of Normandy, France. As paratroopers leap from their planes and landing craft speed toward the coast, another great battle is being waged at home: a prayer battle, imploring God for victory over the dark forces of fascism. It’s almost impossible to exaggerate the importance of the D-Day invasion. As one historian notes, “Without question, a failed invasion of France would constitute a calamity of incalculable proportions for the Western allies.” Who knows how long it would have taken to organize a second invasion attempt—time that might have allowed a German victory. So as word of the assault trickled out, Americans began to pray. Stores closed, and prayer services were swiftly organized in small towns and big cities. Photographs taken on June 6 show just how widespread these prayers were. One picture shows a sign in the window of a novelty button shop reading, “Sorry, no covered buttons today. We are praying for the success of the invasion.” A sign in front of a church reads, “Come in and pray for Allied victory: Hourly intercessions on the hour.” Another photo shows Americans in a synagogue, bowing their heads in prayer. At a noon Mass, we see men and women on their knees, fervently praying. New York City Mayor Fiorello La Guardia took to the airwaves, urging citizens to “send forth [their] prayers to Almighty God . . . to bring total victory . . . in [this] great and valiant struggle . . .” In Washington, President Roosevelt, who had sons in uniform, urged Americans to join him in prayer for all the nation’s sons: “With Thy blessing,” he prayed, “We shall prevail over the unholy forces of our enemy.” And, by heaven, prevail they did. On D-Day, and in the bloody days that followed, allied soldiers brought to vivid life the words of Winston Churchill: “We shall fight in France . . . We shall fight on the beaches, we shall fight on the landing grounds, we shall fight on the fields and in the streets . . . We shall never surrender.” As President Reagan put it 40 years later, speaking at Normandy to surviving Army Rangers: “These are the men who took the cliffs. These are the heroes who helped end a war.” Today, I can’t help wondering: How much did the prayers of their loved ones back home have to do with this great victory? War correspondent Ernie Pyle, who arrived at Normandy on June 7, observed that the Allies achieved victory “with every advantage on the enemy’s side and every disadvantage on ours.” Despite this, he wrote, the total Allied casualties “were remarkably low—only a fraction, in fact, of what our commanders had been prepared to accept.” “Now that it is all over,” Pyle finished, “it seems to me a pure miracle that we ever took the beach at all.” Yes, it WAS a miracle—a miracle backed up by millions upon millions of believers assaulting the gates of heaven. We must never forget what the Allies gallantly sacrificed for the world on D-Day. Today—the 74th anniversary of that invasion—we should set aside time to remember what they did. And then we should pray for the safety of our soldiers, airmen, sailors, and marines who are serving across the globe today—men and women fighting and sacrificing for the freedoms we—and others—enjoy.     The Spiritual Battle on D-Day: “This Great and Valiant Struggle” Today's anniversary gives us an opportunity to reflect on not only our nation's military history, but on its prayer history, rooted in faith that was ingrained in America from its foundation. For further reflections on D-Day, check out the links in our Resources section.