Toy Box Propaganda - BreakPoint
Join us in helping to equip and renew the Church with a Christian worldview by giving before our fiscal-year ends!
Skip to content 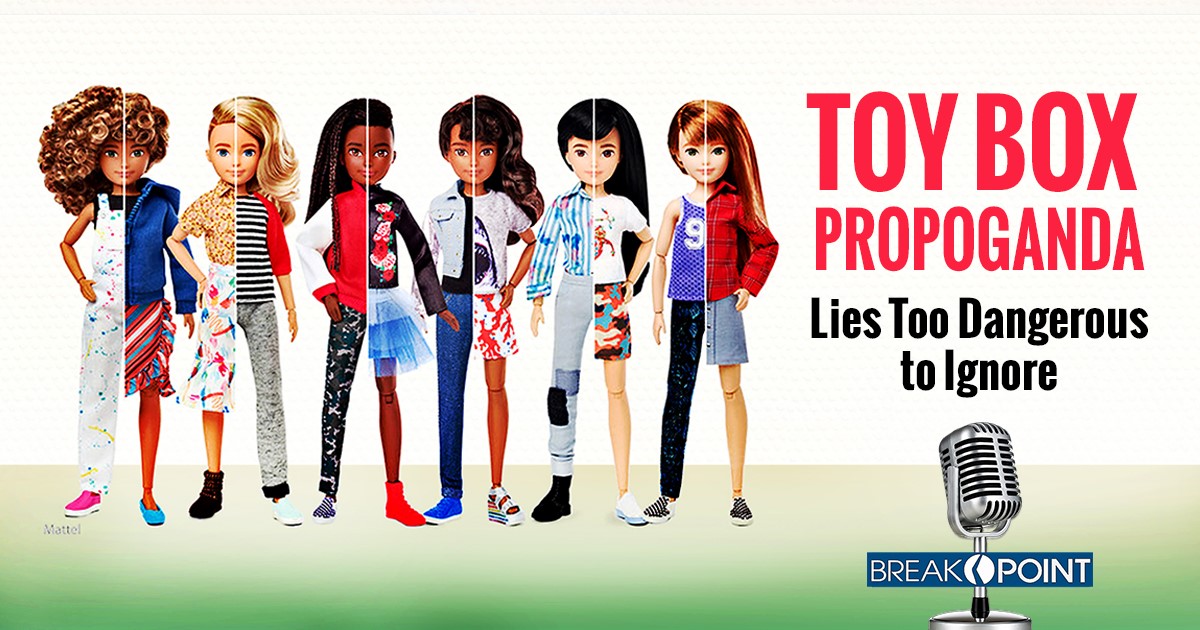 Wise parents try to keep their kids from being influenced by the lies in our culture. That often means not taking them to certain movies, not letting them watch certain shows, play certain games, or listen to certain music. And we have to keep an eye on their friends too. It can be exhausting.

Still, there comes a point—and we are here—when the world around us is so saturated with false messages that ignoring them and hoping they will go away is not only impossible. It’s perilous.

A number of recent stories drives this point home. This week reports surfaced that Disney plans to out the lead character in its enormously popular “Frozen” movies as lesbian. Now, I’m not the kind of guy who spends time browsing Disney princess rumor websites, but if it does happen—and let’s get real, something like this is inevitable—anyone with a daughter knows it’ll be impossible to keep her from finding out. She’s going to hear about it, even if you never let her see the movie.

What’s the dangerous thing to do? Ignore it and hope she doesn’t notice.

Here’s another thing many hope to ignore: the redefinition of words. Last month, America’s oldest dictionary announced it’s now acceptable English to use the plural pronoun “they” as a gender-neutral singular pronoun: as in, “Bill told me they doesn’t identify as male or female.” If you think changes to language aren’t that big of a deal, you may need to re-read “1984.”

Last but not least, Barbie-maker Mattel has introduced a new line of gender-neutral dolls, complete with androgynous bodies and faces, plus mix-and-match hair and clothes. Oh, for the days when the only kid swapping toy parts was Sid from “Toy Story.”

As one senior vice-president explained, this new doll line is “designed to keep labels out and invite everyone in,” because apparently, “kids don’t want their toys dictated by gender norms.”

I’ve got to wonder who did Mattel’s market research. As I predicted last weekend on our BreakPoint this Week podcast, anyone with sons knows just how quickly these non-gendered toys will be gendered. The boys will send them into combat against supervillains or space aliens, and the girls will turn them into families. One of my colleagues recently wrote a column describing how his daughter tucks her brother’s toy trucks into bed. Children have to be talked out of what they innately know about gender identity.

And make no mistake, the companies behind these toys, dictionaries, and movies are doing an awful lot of talking. Perhaps a better way to describe it is as catechesis. The constant repetition of lies—through everyday cultural artifacts such as movies, language, and even toys—has now reached a religious pitch.

We may hope our kids won’t notice that Elsa has a girlfriend, or that Barbie isn’t gendered, or that pronouns are being used in bizarre new ways, but that’s the problem. If they don’t notice, it may be because these wrong ideas seem quite normal to them.

You see, culture is most powerful not where it’s loud and in-your-face, but where it’s quiet and assuming. We’ve experienced these shifts in culture. Our kids haven’t. So, the abnormal becomes normal without any arguments even being made. We might find that, before we have even taken the time to point out the lies to our kids and counter them, they’ve already accepted them as normal.

The right response to the cultural catechism all around us is a catechism of our own. As an Anglican, I mean that literally. Teach them the truths of the faith—including God’s design of male and female—with the same dedication and persistence (and hopefully before) the culture does in teaching lies.

Instead of ignoring the stuff in movies, commercials, television, and music, and hoping it goes over their heads, take the time to point it out and discuss it with your son or daughter in an age-appropriate way. Help them to understand they’re being sold more than toys and entertainment. They’re being sold a false worldview.

The best defense against a false worldview is to notice it, and to expose it for what it is.