Take a Stand For Marriage - Breakpoint
Give today to learn what it means to be a thoughtful Christian!
Skip to content 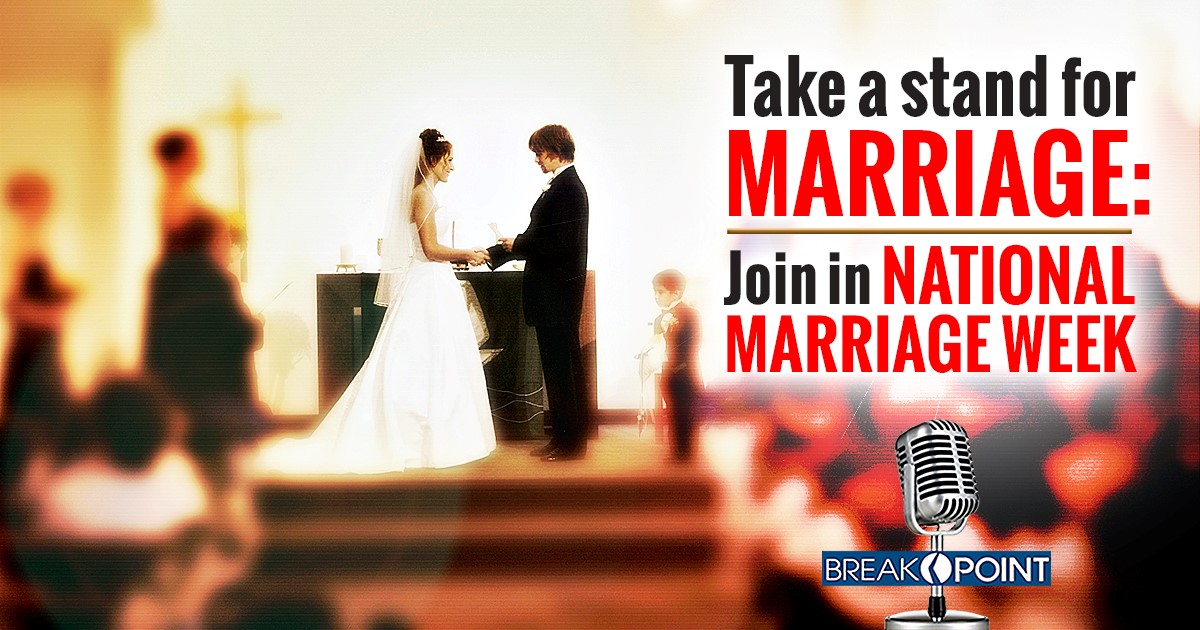 
Take a Stand For Marriage

It’s almost become a cliché to say that marriage is under attack in America. But the trends and statistics are undeniable. Here are some data points:

Millennials: A full 25 percent of Millennials are likely to forego marriage altogether. One report says that a record share of Millennials will remain unmarried through age 40.

That Christians are concerned about the institution of marriage is nothing new. But when leading cultural gatekeepers catch on, it’s eye-opening. Sam Sturgeon, president of Demographic Intelligence, says bluntly that the United States has been experiencing a “cultural retreat from marriage.”

Sturgeon cites two factors: a stumbling economy that has hit men—particularly blue-collar men—hard, making them less likely to be seen as marriage material. A second is the growing willingness of couples to cohabitate—what used to be called “shacking up”—and even bring children into the world without benefit of a life-long marriage commitment.

That’s why I am extremely pleased to tell you about National Marriage Week, an annual campaign in more than 20 countries to strengthen marriages, cut the divorce rate, and foster a culture that supports strong marriages. It is held every year from February seventh through the fourteenth.

Come to BreakPoint.org to learn how you or your church can get involved: host a special event, launch a marriage class, discover what others are doing. It’s a great opportunity for churches to both strengthen the marriages in their congregations as well as support families and kids shattered by divorce and dysfunction. As National Review’s David French notes, “When culture changes this profoundly, it creates wounds public policy simply can’t heal.”

My very good friend Sheila Weber, Executive Director of National Marriage Week, puts it well. She says, “For the sake of raising the next generation, we think that marriage deserves just as much of a positive campaign as does recycling, anti-smoking, or healthy eating!” And it’s hard to argue with that!

Yet it doesn’t take a village to restore marriage so much as it takes a church. French continues: “It will take a culture change on the same scale as the sexual revolution that fractured families and even now relentlessly teaches the gospel of self-indulgence. It will take a renewed love for the ‘least of these’ in our American family, and it will take men and women who care for others not just by sending money but by creating deep and meaningful relationships.”

This will also require an unflinching commitment to teaching what the Bible says about marriage as a lifelong commitment between a man and a woman under God’s loving care. Sheila Weber, by the way, is a Colson Fellow, so she knows all about the power of a biblical worldview to change lives, and ultimately, a culture.

While God gives some of us the noble calling of singleness, we can’t forget this good word from Martin Luther: “There is no more lovely, friendly and charming relationship, communion or company than a good marriage.” Again, come to BreakPoint.org for more on how your church can take a stand for marriage.

The American Dream Is Dying

Why Marriage Matters: 30 Conclusions from the Social Sciences