Our Jolly God - Breakpoint
How can we respond to those around us with truth and love? Give today to receive this month's featured resource.
Skip to content 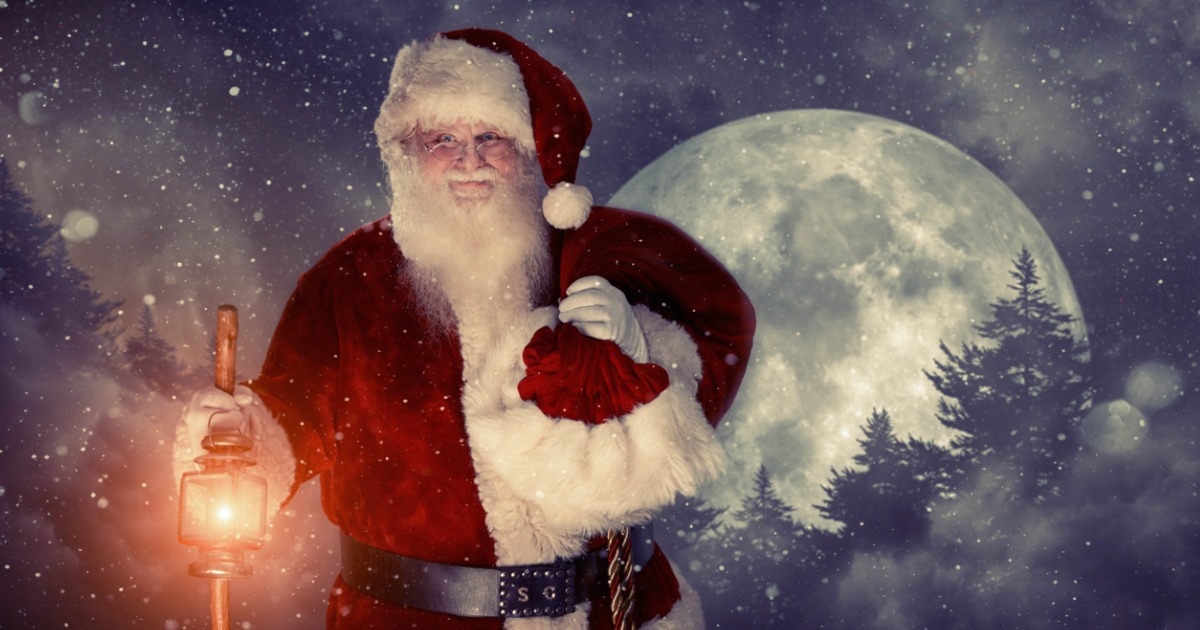 “A God without wrath brought men without sin into a Kingdom without judgment through the ministrations of a Christ without a Cross.” – H. Richard Niebuhr, 1937

In a previous article, I confessed that I have the guilty pleasure of enjoying Hallmark Christmas movies. I stand by everything I said then about the nature of their appeal, but there’s more to the story.

As delightful as they are, we cannot help but to come away from them thinking that something’s missing. For all their talk of family and cookies and snowflakes, it’s not enough. In all the ways they point us to the possibility of a better world, a world beyond sadness and suffering, these lessons in nostalgia fail to provide any means of reaching that better world.

They’re predictable, they’re sweet, but most of all, they’re nice. I mean, think about it, at least in Hallmark-land, the moral problems in the world center on some people being mean, and they’re solved by other people becoming nice. Not ethical, not redeemed, just nice.

[This is all the more true in the time since this article was first written. The “inclusion” of LGBT storylines reminds us that saccharinely sweet feelings of “nice” are not enough to stem the cultural tide pushing us to embrace the new sexual orthodoxy.]

But here’s the thing: Hallmark movies may talk about Christmas, but they never talk about Good Friday. There’s no need for a cross if niceness is all we lack.

For these fun little films, conflicts in life come simply because people are too stressed out and too horizon-focused, and we’d all be better off if we all just relaxed a bit. Okay, maybe some folks find their dream world in the big city rather than Hallmark’s small town, but the point remains the same. All the blessings of life are readily available to anyone who just acts nicer to others in the most nebulous, generalized way possible. And this – happy, nice people living in harmony – this is all that life offers.

This, in many ways, is the true worldview and religion of Americans. Morality, love, ethics – all these are reduced to mere niceness. Whether it’s the conservative “Follow traditional rules of decorum!” or the progressive, “Make everyone feel included!” the core of American ethics is niceness. Treat people well, and God will love you always.

But this is not the picture in the Bible. Or, rather, it’s not the whole picture. As a reader noted in a comment to the earlier piece, for all the Christmas “spirit” in Hallmark movies, you never hear of the birth of Christ, the ostensible foundation of the entire holiday. There’s no sin, no deep and abiding problem with humanity that humanity cannot solve, nothing which requires divine intervention and divine incarnation to redeem. There’s no realization of how bad our sin is, how deep God’s love is, nor of how painful would be the road this love would lead Him on.

This isn’t the only time we see this Christmas card portrayal of America’s sentimental religion. Think back to our manger scenes and old Bible movies, the ones from back in the 1950s and 1960s. These show that blessed night in Bethlehem with pastels, quiet animals, silent shepherds, miraculously content newborn baby and an amazingly photogenic young mother.

What’s the reality? Farm animals are nasty, smelly creatures who do not always react well to strangers. Ancient Near Eastern shepherds were not a bunch of stoic men with blue eyes and light hair. Newborn babies are not quiet and content within moments of birth, even if they are the second person of the Trinity. And, as wonderful and beautiful as a new mother might be, right after giving birth, she is not going to look like those pictures portray her.

Now, we can laugh at such things. With all the anachronisms and ridiculously clean surroundings, they’re just silly. However, even as we giggle, let’s be careful not to miss something significant which is going on with these fanciful manger scenes. As with Hallmark movies, they express our longing that the world would truly be like that. What we see in these movies and paintings and figurines is wishful thinking, visualizing a world where everything is peaceful and beautiful. It’s the desire to live in a land where storybooks come to life, where our problems can become the illusion, even as we embrace the illusion of a life without problems.

So we say to ourselves that there is no sin, only suppressed fears and desires. There are no real disagreements, only misunderstandings and ignorance. Rather than admit that there is something fundamentally wrong with the warp and woof of life, something flawed with the post-Fall human nature, we tell ourselves that we can, in our own abilities, our own power, our own niceness, bring that fanciful good world into our reality. In our meaningless world we attempt to create our own meaning, a beautiful meaning, even if that new meaning exists only in our imaginations.

Another cultural image of Christmas is Santa Claus. Don’t worry. I’m not launching a diatribe against Santa. I fully agree with G. Shane Morris’s comments about the legitimate joy of such delightful myths. I read “Twas the Night Before Christmas” to my kids several times between Thanksgiving and Christmas. We hang our stockings by the chimney with care, even if the children nestled all snug in their beds know full well that it is mom and dad who fill them and give them their other presents.

But, let’s think about Santa for a moment. Who is he? He’s an ageless father-figure who lives “up there.” He has magical servants of a non-human variety who aid in his creative process and help to fulfill his mission of good to all. He has mysterious powers to know everything that you are doing at all times, and he can seemingly appear in the homes of all 7+ billion people on the planet in a single night.

He is God! Well, at least he is a fair facsimile of the American version of God. And what does this god expect of us? Be nice! Be generous! Work hard but take some time off from your busy schedule and spend some time with your family! This is America’s religion.

What else do we know about the divine Claus? He’s incredibly moralistic. The smallest detail of your life is under the constant analysis of a judging figure. After all:

He’s making a list and checking it twice. Gonna find out who’s naughty or nice.

But, in keeping with American theology, Santa is a bit of a universalist. I mean, he may talk a big game about doing the right thing, but has anyone ever gotten ashes in a Christmas stocking? No matter what we do or how we live, the blessings of this father-figure will come. As Gene Autry put it:

Santa Claus knows we’re all God’s children, That makes everything right, So fill your hearts with Christmas cheer, ‘Cause Santa Claus comes tonight!

What we have here is a high degree of moralism accompanied by a low threshold of acceptance. You must earn yourself into Santa’s, or God’s, good graces, but, basically everyone but Hitler and Charles Manson is going to heaven, anyway.

This is the legalism of cheap grace, the idea that we can by our goodness achieve and maintain the proper righteousness needed to secure God’s favor. But, if you don’t, that’s okay too, because God’s just too nice to condemn anyone. Ultimately, this kind of moralism isn’t about doing good but feeling good. It is about bite-sized ethics which never cost us a thing and which are bounded by nothing more than our own divinized desires.

This is American religion. Sometimes it shows up in a shiny suit and sometimes it’s something more edgy, but the message is the same. God wants for you only what you want for yourself. So long as you are honest with your own longings, nothing you long for can be wrong. Affirmation and encouragement are “in” while correction and rebuke are passé. Loving others becomes nothing more than letting them do what they want, and grace becomes just another word for license to do as we please.

Too often, when looking at the seeming simplicity of the incarnation, with its gentle mother and pastoral manger scene, we see this as a testimony of God’s mere niceness. God, in acting meekly, so we think, is telling us to be kind to one another. Now, it’s good to be kind, to be nice to one another, and a key part of the Christian worldview is the amazing love that God has for His enemies. But that’s not all that’s going on at Christmas.

As much as we may love telling stories of St. Nick coming down the chimney, looking at movies and manger scenes with sweet baby Jesus, and as much as we have our guilty pleasures of silly, sappy Hallmark Christmas movies, there’s so much more to Christmas than these. You see, Santa may never condemn you no matter how bad you are, but he’d also never die for you. Pretty pictures may give us a brief moment of beauty in our hectic lives, but they won’t redeem you from your sin. Sentimental movies point us to a better world, but they’ll never show us the way.

Christ wasn’t born to give us nice stories or to tell us that we’re good, just the way we are. He came to die for us. He came to die for us because we were so bad, just the way we are, that it took the death of God Himself to redeem us. The grace of Christ on the cross has no meaning apart from our deep and abiding sinfulness. A humanity in need of the niceness expected in the American religion would never cause God Himself to leave His throne to take up the cross on our behalf.

So, this Advent, watch your silly Hallmark shows, set up your unrealistic manger scenes, leave your stockings ready and waiting. Eat too much and sing too loudly. Rejoice in the days of mirth and celebration but remember that these small joys have a deeper meaning and point to an even greater joy to come.