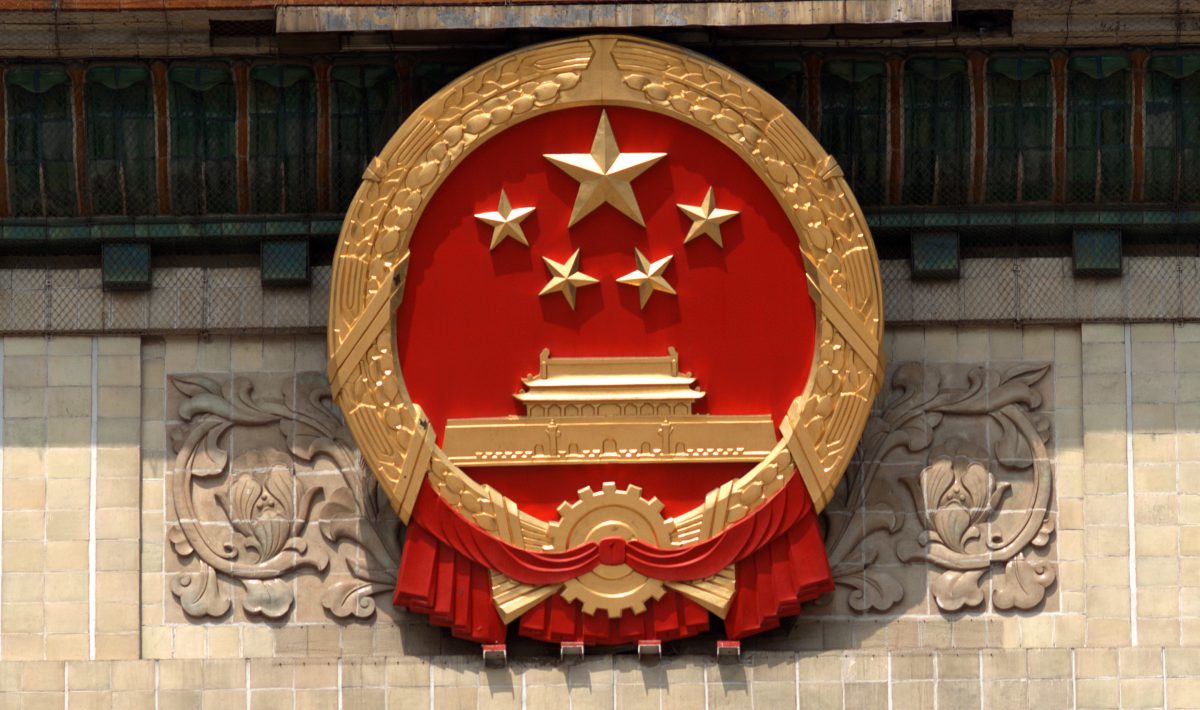 Increasingly threatened with a future of economic and cultural instability, the Chinese government is working hard to guarantee public safety and deliver the kind of “domestic tranquility” that only comes by limiting freedoms. For example, several sources are reporting that, yet again, Beijing has increased pressure on religious groups. Beginning this year, all “approved” religions must conform to its new Administrative Measures for Religious Institutions.

As Cameron Hilditch put it in National Review:

The Chinese Communists aren’t trying to extirpate every last trace of theism … Instead, they’re attempting to enervate religious opposition to the regime by taming and co-opting domestic religious belief, turning it into another thoroughfare for the regime’s agenda of social control.

Despite Beijing’s formal claims that “[c]itizens of China may freely choose and express their religious beliefs,” this isn’t freedom. It isn’t toleration. It cannot even be called benign neglect. This is the empty permission to obey. Going forward, religious groups and individuals will be “free” to practice their faith only if that faith actively conforms to and works under state authority.

Under these orders, not conspiring against the state or even passively complying with Beijing’s orders will not be enough to avoid trouble. Proactive support of tyranny is required. In no way will the precepts of heaven be allowed to challenge the mandates of the state.

Of course, Xi Jinping’s regime, like most totalitarian powers, likes to style itself as the frontline of innovation. In reality, he’s just the latest in a long line of tyrants who, down through the ages, tried and failed to unseat God by compromising the loyalties of His people. Think of Daniel’s friends refusing to bow before Nebuchadnezzar, to Daniel himself refusing to kowtow to a Persian emperor’s vanity, to Christians facing down Roman Caesars.

Like Xi, these tyrants didn’t care to whom or to what God’s people prayed, as long as that worship didn’t spoil their worship of the tyrant. In Rome, Christians only had to accommodate the state with a little incense offered to the empire alongside their loyalty to Christ. This was a line they would not cross. They would not subject the claim Christ had on their lives and on all of reality to the demands of Rome and the “gods” of their age.

To be clear, it’s not just in the ancient world or in Communist lands where Christians are called to conform. Recently, the French Minister of the Interior demanded the Church’s submission, saying of evangelicals, “We cannot discuss with people who refuse to write on paper that the law of the Republic is superior to the law of God.” In American history, pastors who refused to follow the pro-slavery or segregationist script often found themselves “cancelled,” if not worse. Today, Christians who do not conform to the new progressive sexual orthodoxy are threatened with dismissal from polite society, and maybe even their jobs.

Christians have faced cultural hostilities throughout history whenever there is a system or power that claims to be the absolute and final authority. It’s not that certain kings and dictators throughout history were bad men, and therefore acted badly towards the Church and other dissidents. Any ruler and any ideology that presumes the omniscience and omnipotence that only belongs to God will inevitably see Christianity’s claims to transcendent truth as an existential and intolerable threat.

As Francis Schaeffer put it, when describing the Roman-era persecution endured by the Early Church, “No totalitarian authority nor authoritarian state can tolerate those who have an absolute by which to judge that state and its actions.” This applied to the ancient world, it applies to Beijing, and it applies to Western ideologies that demand our absolute and total allegiance.

The good news is that God always strengthens, preserves, and sustains His people. He did it for Daniel and his friends. He did it for the Early Church, including the persecuted and the martyrs. He’s doing it for our brothers and sisters in China. And, we can be sure, He will do it for us. We must never bow our knee to false gods.

China Is a Paper Dragon

In the Second Cold War, Religious Americans Must Lead the Way

Just a Pinch of Incense

Lawyer Predicts New and Ugly Chapter of the Culture War: A Conversation with the ADF’s John Bursch