BreakPoint: A Climate of Death - BreakPoint
Join us in helping to equip and renew the Church with a Christian worldview by giving before our fiscal-year ends!
Skip to content 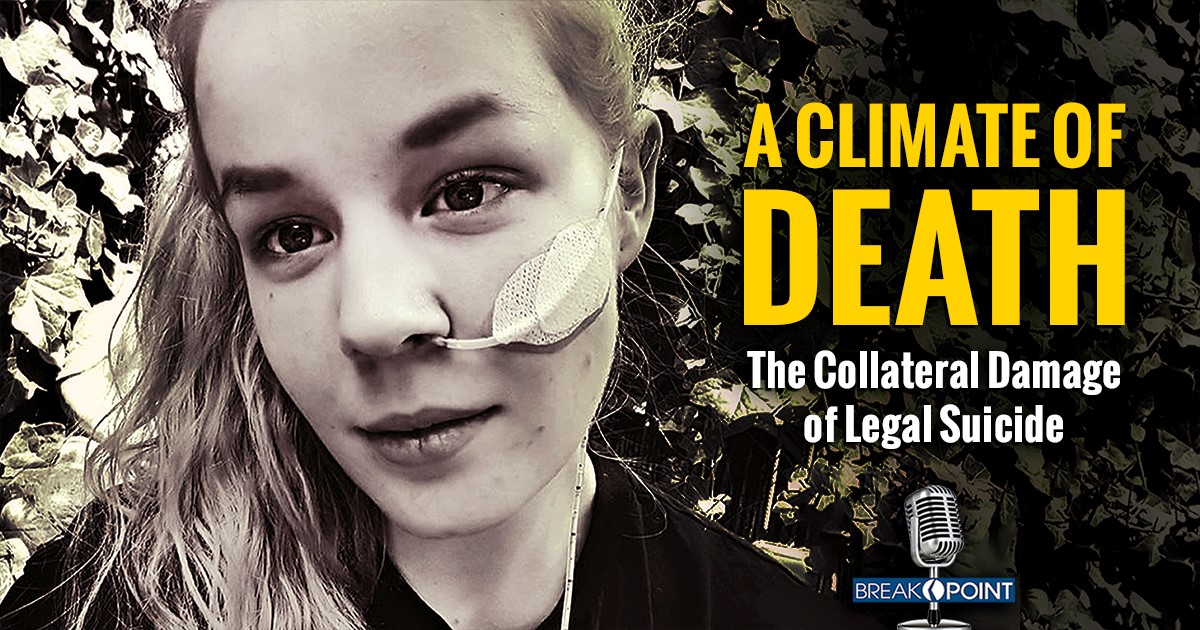 
BreakPoint: A Climate of Death

Last week, international news outlets reported that a 17-year-old Dutch girl named Noa Pothoven legally secured a physician’s help in killing herself after years of battling trauma from childhood sexual assault and rape. This young woman, who had previously been hospitalized for extreme anorexia, underwent evaluations after requesting legal euthanasia. A few days before her death, she posted on Instagram that, “I’ve stopped eating and drinking for a while now, and after many discussions and evaluations, it has been decided to let me go, because my suffering is unbearable.” Many jumped to the conclusion that she ended her life with a doctor’s help. But it turns out the story is more complicated. The Guardian reports that Pothoven’s request to die by doctors’ help was actually denied because she was too young, and she might benefit from counseling. Instead, the girl decided to starve herself with her parents and doctors deciding not to intervene. The whole thing is tragic, from her initial trauma to her eventual decision to die. But just because initial reports were mistaken about a physician being directly involved in her death doesn’t mean that it is unrelated to the Netherlands’ notoriously open euthanasia laws. Quite the opposite, in fact. A growing body of research indicates that, contrary to expectations, legalizing euthanasia and physician-assisted suicide results in higher rates of suicide, both assisted and unassisted. A 2015 study by Oxford researchers found that U.S. states where physician-assisted suicide became legal saw a 6.3 percent increase in total suicides. A 2017 study by Dutch researchers published in the Journal of Mental Health came to an even more startling conclusion: “...the option of euthanasia for people with psychiatric conditions does not reduce the number of nonassisted suicides [but] rather contributes to a rise in their numbers.” And “rise” is almost a euphemism. Suicide rates in the Netherlands are among the fastest growing in the world. In fact, well over a quarter of deaths there are “induced”—a metric which includes suicides, murders, and euthanasia. By comparison, just 2.5 percent of deaths in the U.S. are induced, meaning that the Dutch, with their low murder rates, are simply choosing to die in historic numbers. So how does legal assisted suicide cause an explosion in overall suicides—especially when so many predicted the opposite? The Dutch researchers venture a guess: “...making [suicide] a legal possibility,” they write, “is a political decision with potential implications for a society’s credibility and resolve to protect life and prevent premature deaths.” In other words, when suicide is legal, psychiatric patients—particularly those like Pothoven who suffer from PTSD and depression—receive what these authors call a “paradoxical societal signal.” Sure, doctors will make a token effort at trying to talk people out of ending their lives, but if they really want to die, those same doctors will walk them through it. “Seen more broadly,” the authors conclude, “the option of euthanasia for psychiatric patients may contribute to a societal climate in which death is increasingly seen as a remedy for all forms of severe suffering.” I don’t think I’ve heard a group of social scientists come so close to summarizing Pope John Paul II’s famous criticism of the “culture of death.” They almost admit, in so many words, that the law is a moral teacher, and that a nation or state which teaches its citizens that death is a cure for suffering will reap more death. Let me go on record right now as predicting that future research will confirm this link. It will become an established fact that legally endorsing suicide results in a frightening increase in unassisted suicides. How can it not? When a society tells hurting people that their lives may not be worth living, they’re going to believe it. And people like Noa Pothoven need help living, not help dying. Her sad story should stand as a reminder that bad ideas have victims—especially when those bad ideas become enshrined in law.     Download mp3 audio here.