A Win for Free Speech and Conscience Rights... - Breakpoint
What makes the Church essential? Click here to learn more.
Skip to content 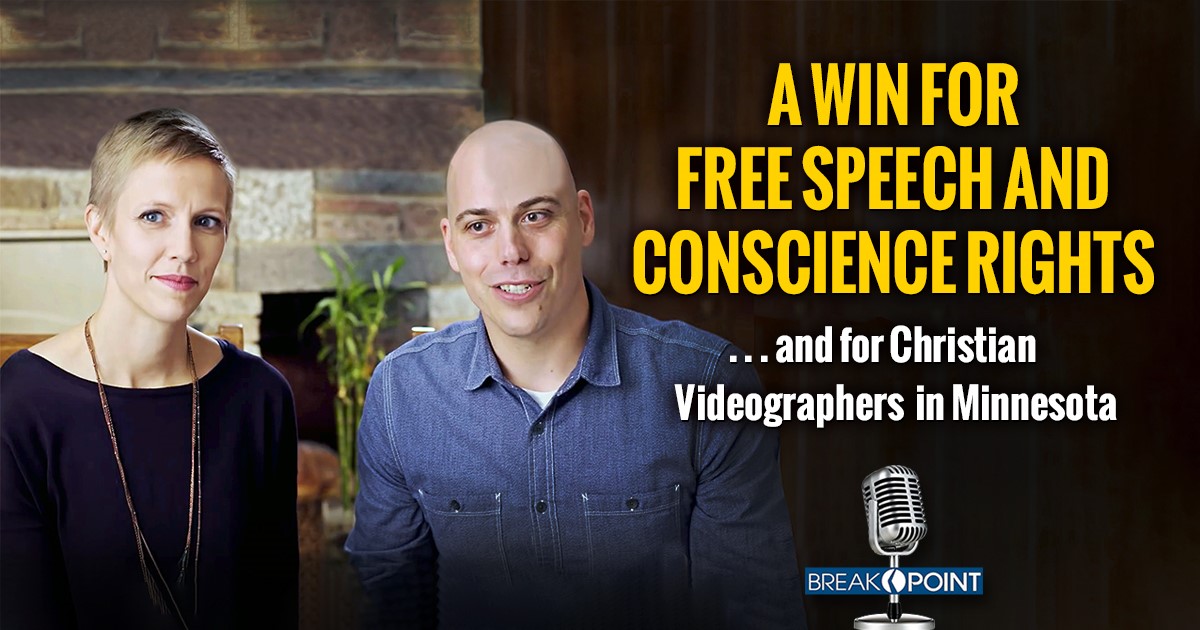 
A Win for Free Speech and Conscience Rights…

I’m no lawyer. Typically, I have to rely on those in our Colson Center orbit trained in law to help me interpret the legalese in a judge’s decision, but even I can understand the straightforward and sweeping language of Circuit Court Judge David Stras.

“Carl and Angel Larsen wish to make wedding videos,” Judge Stras wrote. “Can Minnesota require them to produce videos of same-sex weddings, even if the message would conflict with their own beliefs? The district court concluded that it could and dismissed the Larsens’ constitutional challenge to Minnesota’s antidiscrimination law. [But] Because the First Amendment allows the Larsens to choose when to speak and what to say,” we reverse their decision.

How’s that for judicial clarity?

Because this is such an important case, I want to give you the background. And again, because of its clarity, I’ll use language from the ruling itself. The Larsens create “commercials, short films, and live-event productions.”  While they do business with anyone regardless of race, sex, gender, etc., they will not create videos that “contradict biblical truth; promote sexual immorality; support the destruction of unborn children; promote racism or racial division; incite violence; degrade women; or promote any conception of marriage other than as a lifelong institution between one man and one woman.”

You can guess which of those areas created problems for them. As Judge Stras’ decision put it, “The Larsens now wish to make films that promote their view of marriage as a ‘sacrificial covenant between one man and one woman.’”

According to the state of Minnesota, they can only do that if they will also, if asked, produce videos that paint same-sex marriage in a positive light. Otherwise, they would run afoul of the state’s anti-discrimination act and be subject to fines and even jail time.

The Larsens, with the help of the Alliance Defending Freedom, issued what’s called “a pre-enforcement challenge.” When a district court ruled against the Larsens, they appealed to the Eighth Circuit and prevailed.

The heart of the challenge had to do with the extent our free speech is truly free. Initially, this was the center of the defense of Masterpiece Cakeshop owner and cake artist Jack Phillips, but the Supreme Court ruled in his favor due to the gross mistreatment and disrespect he suffered at the hands of the Colorado Civil Rights Commission.

In his decision, Judge Stras left no question that creating video content is speech and must be protected. “The Larsens’ videos are a form of speech that is entitled to First Amendment protection,” he wrote. “The Supreme Court long ago recognized that ‘expression by means of motion pictures is included within the free speech and free press guaranty of the First and Fourteenth Amendments.’”

The next question is whether the state can compel someone to promote messages they disagree with. The obvious answer that wasn’t obvious to the state of Minnesota or the Colorado Civil Rights Commission was obvious to Judge Stras: “The Supreme Court has recognized,” he wrote, “that the government still compels speech when it passes a law that has the effect of foisting a third party’s message on a speaker.”

So now what happens? The case could make its way to the Supreme Court, which would be just fine according to David French. I agree with him that “it will be difficult to see [the Supreme Court] reversing the court of appeals” because the appeals court made such a strong case for “the constitutional order.”

Let’s hope Minnesota won’t be as willfully defiant as the state of Colorado, who continued to harass Jack Phillips. Still, there remain plenty of local jurisdictions and state civil rights commissions who will attempt to curtail the religious freedoms of its citizens.

That’s why we’ll need more courageous people like the Larsens, who live out their convictions with courage and kindness. And we’ll need to continue to support organizations like ADF. After all, one day, we may very well need their support.