BreakPoint: “Emanuel” - Breakpoint
How can we respond to those around us with truth and love? Give today to receive this month's featured resource.
Skip to content 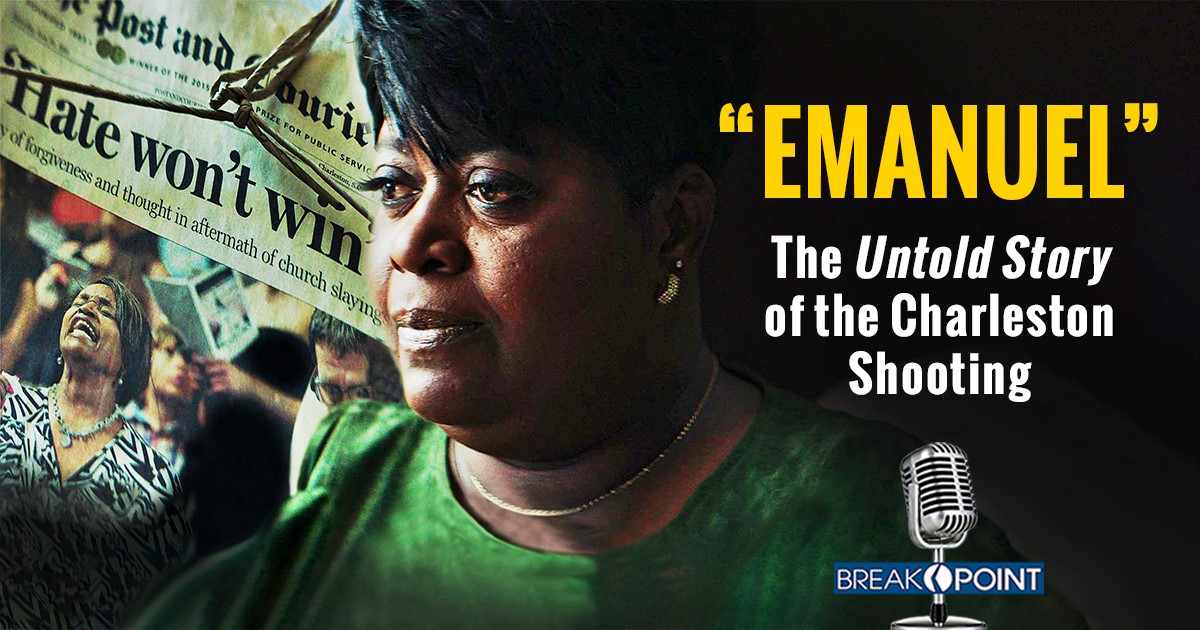 In June 2015, Dylann Roof, a 21-year old white supremacist from North Carolina, drove to Emanuel African Methodist Episcopal Church in Charleston, South Carolina and committed one of the most shocking mass murders in American history. After entering the church, Roof asked to see the Rev. Clementa Pinckney, the church’s pastor, and then joined a Bible study with members of the congregation. They welcomed him. But Roof pulled out a pistol and started shooting. He killed nine of our Christian brothers and sisters in cold blood, leaving another alive to tell everyone what had happened. He was hunted down and captured, and eventually was convicted of numerous state and federal charges. Roof currently awaits death by lethal injection. What many found as shocking as the killings themselves was the reaction to Roof by many of the victims’ families. At this year’s Wilberforce Weekend, Christian film maker Brian Ivie told us how he had heard about the Emanuel AME shooting while on his honeymoon in Mexico. One morning, while he was out on the balcony, Brian heard his wife, Amanda, sobbing inside. “Nine people just got shot in their Bible study,” she said, “in Charleston, South Carolina.” And then she went on to describe the massacre. Brian was stunned. “Then she looked at me again,” he relates, and said, “You don’t understand. They’re forgiving him. The family members are forgiving the murderer in court.” On her laptop, Amanda had watched, stunned like so many of us, Nadine Collier, the daughter of Ethel Lance, tell Roof: “I will never be able to hold her again, but I forgive you and have mercy on your soul. You hurt me. You hurt a lot of people, but God forgives you, and I forgive you.” Then Anthony Thompson, husband of Myra Thompson, told Roof, “I forgive you, and my family forgives you. But we would like you to take this opportunity to repent. Change your ways.” Brian Ivie told his new bride, “I hope whoever tells that story one day does not skip [the forgiveness]. Because I think God just showed up.” As it turns out, Ivie’s prayer was answered, because he is the one who has been tasked with telling this amazing story of tragedy, suffering, forgiveness, and hope, in his new documentary called, “Emanuel: The Untold Story of the Victims and Survivors of the Charleston Church Shooting.” It will be in theaters next week, June 17 and 19 only. You need to see this film. Brian, whom you might remember from his first film, “The Dropbox,” has done something special here. Yes, the cinematography is beautiful, and the music is excellent. But more than that, Brian Ivie has managed to tell the story by getting out of its way: the racial history of Charleston, the sacredness of a Bible study violated, the criticism that family members received for offering forgiveness, the overall cultural tension already present when this evil act was perpetrated, and how, in the end, forgiveness has the final word. What sets this documentary about Emanuel Church apart, as Ivie told the Charleston Post and Courier, is “the theological understanding of where forgiveness comes from. And that is the cross of Christ.” I urge you to gather friends and family, believers and unbelievers alike, and go see this film “Emanuel.” Again, it’s playing only on June 17 and 19 in theaters all across America. And by the way, Steph Curry (yes, that Steph Curry, the basketball player) and Viola Davis (yes, that Viola Davis, the actress) are the executive producers of the film. They believe in this film and so do I. Find out where it is airing at EmanuelMovie.com. And you can also hear Brian Ivie’s terrific presentation from the Wilberforce Weekend where he tells the story of the film. It was appropriately titled “Can Christianity Answer Tragedy” and is on the BreakPoint Podcast right now. You can find it at BreakPoint.org or wherever you download podcasts.   Download the audio MP3 of this commentary here.