BreakPoint: Eugenics Is Still with Us - Breakpoint
Help make a bigger worldview possible for Christians around the globe with a year-end gift!
Skip to content 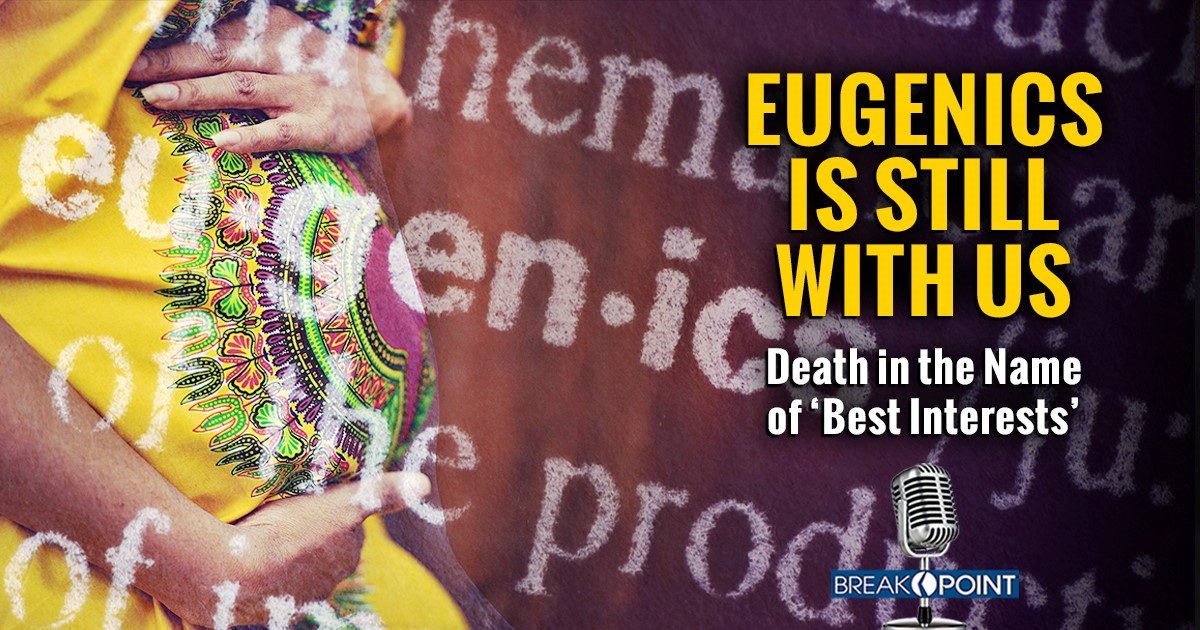 
BreakPoint: Eugenics Is Still with Us

Eugenics is a bad idea, a bad idea that, like all bad ideas, has victims. Efforts to keep those deemed inferior from reproducing or even existing were a central part of the Nazi experiment in Germany, which upended the entire world and led  to the extermination of millions of so-called “lives unworthy of life.” And yet, eugenics is still with us. Not (thank God) the eugenics of the Nazi variety, but the West has long been unable to shake the sort of eugenics that’s reminiscent of the kind practiced before the Third Reich. This quieter type of eugenics is sold with the claim to have the best interests of victims and society in mind. Proponents wear clean, white lab coats or judges’ black robes, while still dehumanizing and advancing evil. Just a few days ago, a British judge ordered that a woman with mental disability, who is in her twenties and in her second trimester of pregnancy be forced to have an abortion. This order was contrary to the communicated wishes of both the anonymous woman and her mother, who is an immigrant from Nigeria and a former midwife. Judge Nathalie Lieven of the Court of Protection, which adjudicates cases involving mentally disabled persons, acknowledged that her order for a forced abortion was “an immense intrusion” into this young woman’s life, but she insisted the state was acting in her “best interests…” Having this child, Judge Lieven argued, would be more traumatic than killing it, because this disabled woman couldn’t possibly understand what it means to be a mother. In a shockingly patronizing note, the judge went on: “I think she would like to have a baby in the same way she would like to have a nice doll.” So, presumably, the decision should be taken out of her hands and the hands of her family—who promised to care for the baby. Thank God, as the Catholic News Service reported on Monday, the English Court of Appeals overturned this frightening ruling and halted the forced abortion, at least for now. The three justices on the Court promised to release the reasons for their decision at a later date. It’s anyone’s guess what they’ll say. What we must demand, however, is that the horrifying logic that Judge Lieven used in her original decision is confronted and confined to the dustbins of judicial history. After all, her words were far too reminiscent of the words Justice Oliver Wendell Holmes used, writing for the majority in Buck v. Bell, in 1927. In that decision the U.S. Supreme Court ordered the forced sterilization of a woman with mental disability. Holmes’ infamous justification for violating this woman’s dignity: “Three generations of imbeciles are enough.” Those words were later cited during post-World War II Nuremberg trials by Nazi defendants as proof of their innocence. Though forced sterilizations of the mentally disabled are, hopefully, a thing of the past, forced and selective abortions are every bit as much a form of eugenics, and are grounded in the same terrifying worldview. In America, as in other developed countries, the vast majority of babies diagnosed in the womb with disabilities like Down syndrome are aborted. Again, this is done in the name of compassion, complete with the platitudes like, “Life with Down syndrome is not a life worth living.” How eerily similar to other phrases used by the Nazis to support the killing of those whom they deemed to be “unfit.” You should know that prenatal tests that lead to our contemporary eugenics practices are nowhere near as reliable as advertised. According to a 2014 study in the New England Journal of Medicine, over half of women who were told their child likely had Down syndrome either delivered or aborted babies which turned out to be healthy. And a whopping 60 percent of babies diagnosed in utero with Edward syndrome, another chromosomal disorder, turned out to be healthy, too. Even so, let’s be clear: All life is worth living, disability or not, and affirming the profound, inherent, and equal value of people with disabilities is an ancient, bedrock Christian practice. The idea that there are certain people unworthy of life or of human rights is a tree that’s borne nothing but poisonous fruit for over a hundred years. Despite the historical horrors of the 20th century, it seems that too many are still willing to eat that fruit.     Download mp3 audio here.