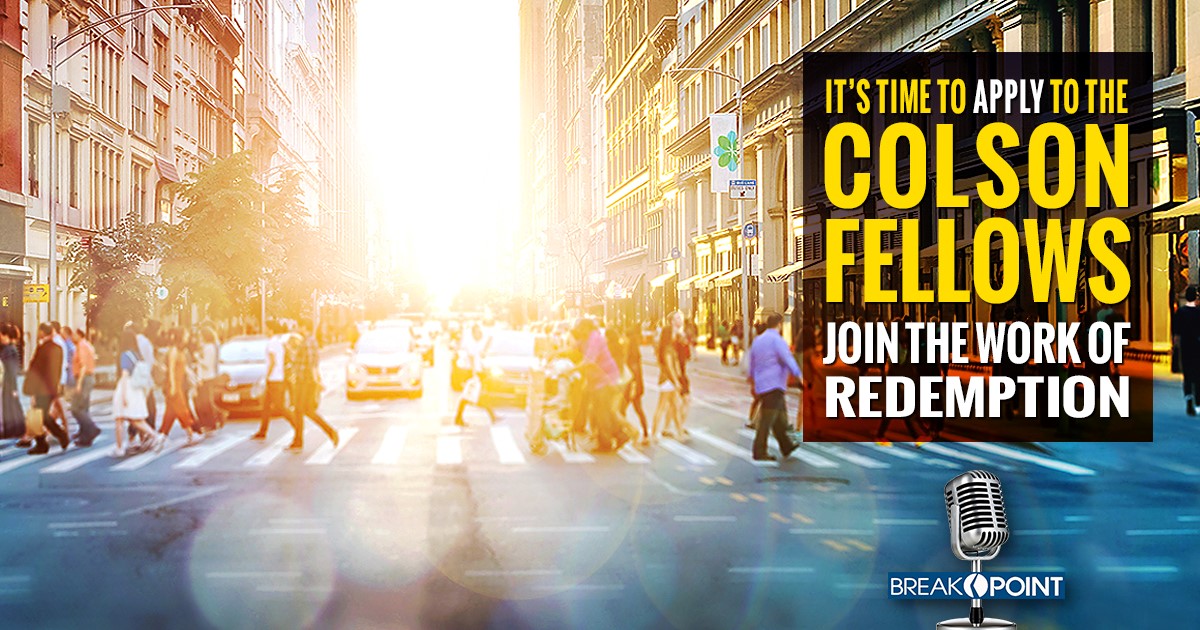 
It’s Time to Apply to the Colson Fellows

Everything we do at the Colson Center, including BreakPoint, the Point, BreakPoint This Week, the BreakPoint podcast, and the Wilberforce Weekend, is designed to provide clarity on the culture from a Christian Worldview.

But the goal isn’t just to think clearly. It’s to live redemptively—to develop a robust Christian worldview so that we can thoughtfully engage this post-Christian culture and join God’s work in re-shaping the world in the light of His Kingdom. Now, if this kind of Christian living is what you are after, and if you’re ready to take a deep dive into Christian Worldview to prepare, I want to invite you to consider applying for the Colson Fellows program.

Here’s how it works. Every year, people from around the country—even around the world–apply for the program. Those who are accepted learn how to articulate and defend biblical truth in the marketplace of ideas. They spend the next ten months in intensive instruction on worldview and cultural analysis. They read both Christian classics and the best contemporary writers. They watch films and debates, and learn to identify the worldview messages in everything they read or watch.

Colson Fellows also take part in bi-monthly webinars with top Christian thinkers and authors such as Os Guinness and Joni Eareckson Tada. They join other Fellows in weekend residencies to meet one another and learn directly from great worldview teachers. And they develop a plan that allows them to live what they’ve learned for the benefit of others.  And they join a network of more than 1,500 commissioned Colson Fellows that have studied with us and are committed to living it out in a broken world.

So, who becomes a Colson Fellow?

People like Steve and Margaret Lindsey.  Steve is a former Boeing executive, and Margaret is the founder of a non-profit art studio and gallery. Together they launched the Center for Faith and Work in Los Angeles to help Christians integrate their faith and work not only to thrive in the secular workforce, but also to become agents of renewal in the city of Los Angeles.

People like Billy Hutchinson, a teacher of Bible and psychology at Hickory Grove Christian School in North Carolina, who grew up a fan of Chuck Colson and BreakPoint. Despite a heavy ministry and teaching workload, he became a Colson Fellow, precisely because, as he put it, Chuck Colson “told us to apply the Christian worldview to every sphere of culture. Christianity is not just a set of doctrines, but a way of thinking, believing, and acting that should infiltrate every area of life.”

Besides the time commitment, Billy also had to consider the financial cost of the Fellows program, given that he had student loans and lived on a teacher’s salary. Thanks to the generosity of Colson Center donors and his own school, he was able to receive a scholarship that made his participation possible.

Make no mistake, the Colson Fellows Program is demanding of your time, but know that God uses this program to prepare people for frontline Kingdom work. Chuck Colson’s great goal in the final years of his life was to teach people how to think Christianly about our fallen world, and to use their gifts to begin repairing the damage in their own neighborhoods and communities.

To learn more about the Colson Fellows Program, come to  www.ColsonFellows.org. In addition to the national cohort, we have regional Colson Fellows cohorts in 18 cities around the country. Regional cohorts offer the same robust content but deliver it within a community setting. They meet monthly and are led by commissioned Colson Fellows.

Are you ready to answer the call? Learn more and apply today at  www.ColsonFellows.org.