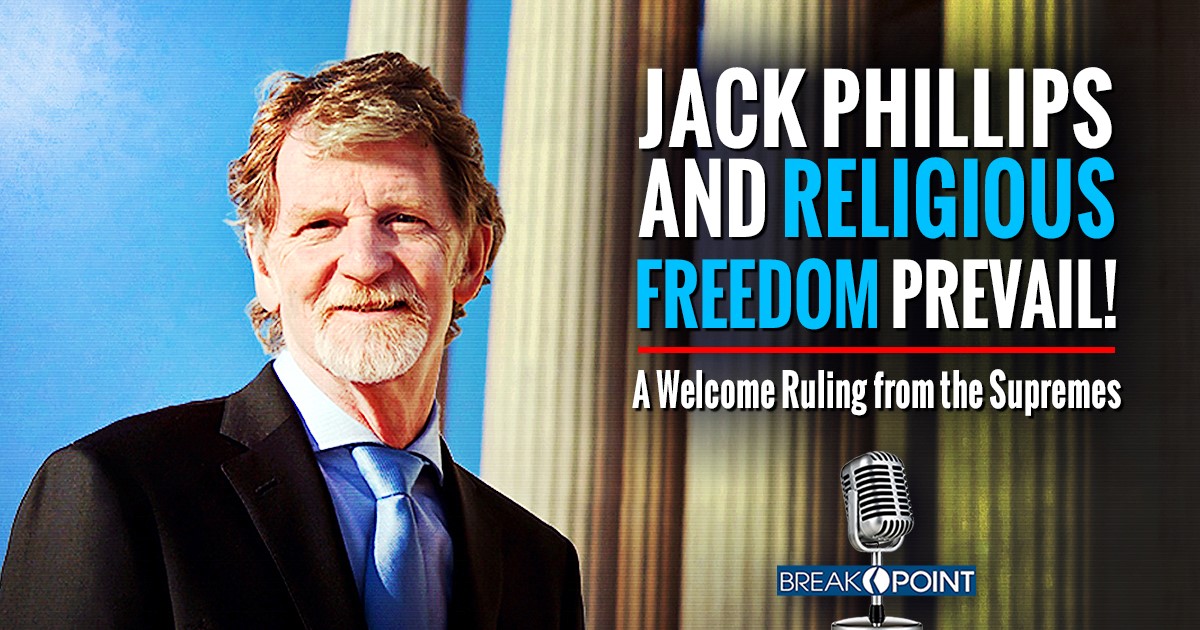 Yesterday, the Supreme Court delivered a big victory for the cause of religious freedom and for my favorite cake artist. I’ll unpack the decision. Yesterday’s surprising 7-2 majority decision was announced by the Supreme Court in favor of Colorado cake artist Jack Phillips. We’ve talked a lot on BreakPoint about Masterpiece Cakeshop v. Colorado Civil Rights Commission, so I won’t rehearse all the facts today, other than to say that the facts that we’ve emphasized were not what interested the majority the most. Instead. the Court focused on the atrocious conduct of the Colorado Civil Rights Commission. Writing for the majority, Justice Kennedy said the case raised “difficult questions as to the proper reconciliation of at least two principles. The first is the authority of a State and its governmental entities to protect the rights and dignity of gay persons who are, or wish to be, married but who face discrimination when they seek goods or services.” The second principle is “the right of all persons to exercise fundamental freedoms under the First Amendment,” namely both “the freedom of speech and the free exercise of religion.” At the Supreme Court, Phillips’ attorney emphasized freedom of speech. During oral arguments, many questions arose about which wedding-related activities would rise to the level of speech. But in his opinion, Justice Kennedy and the majority took a surprising turn, and essentially punted on the question of speech altogether. Instead, he wrote “the Colorado Civil Rights Commission’s consideration of this case was inconsistent with the State’s obligation of religious neutrality.” As Kennedy put it, the Civil Rights Commission exhibited “clear and impermissible hostility toward the sincere religious beliefs” of Jack Phillips. Justice Kennedy scolded the commissioners for telling Phillips that “religious beliefs cannot legitimately be carried into the public sphere or commercial domain,” for “implying that religious beliefs and persons are less than fully welcome in Colorado’s business community,” for saying that “freedom of religion” has been used to justify discrimination, slavery, and the Holocaust, and for saying that claiming religious freedom is “one of the most despicable pieces of rhetoric that people can use.” Reading Kennedy’s opinion, it’s clear that Jack Phillips prevailed because Kennedy, along with justices Kagan and Breyer, saw that the Commission’s actions were driven by hostility and animus toward religion and religious people. As the Alliance Defending Freedom attorney Kristen Waggoner commented after the ruling, “Tolerance and respect for good-faith differences of opinion are essential in a society like ours. This decision makes clear that the government must respect [Phillips’] beliefs about marriage.” So, where does all this leave us? In many respects, the ruling itself – by which I mean the wording, not the margin – was a narrow one. It is still far from clear what level of “respect” Kennedy was looking for, or how the court would have ruled had the Commission not been so horrible to Jack. Thankfully, justices Thomas and Gorsuch did address the free speech claim of Phillips in their concurring opinion. Both agreed though, that there’s no way to know if a similarly-situated person, such as florist Barronelle Stutzman, would prevail on these grounds. Still, this is a win, if for no other reason than a loss would have been a disaster. If the Court had allowed the Colorado Commission to get away with their flagrantly hostile conduct, they would have launched an “open season” on people of faith in the marketplace. We owe thanks first of all to God, then to Jack Phillips and ADF for their steadfast courage, and finally, to the Supreme Court. But know this, this decision doesn’t settle the biggest challenges that religious freedom faces. Hopefully however, it did wake up any Christian, church, or pastor who decided to sit this one out.   Jack Phillips and Religious Freedom Prevail!: A Welcome Ruling from the Supremes Read more about the Supreme Court's encouraging decision in the Masterpiece Cakeshop case. Check out the links in the Resources section. And taking John's advice, be prepared for further free speech/religious liberty battles.