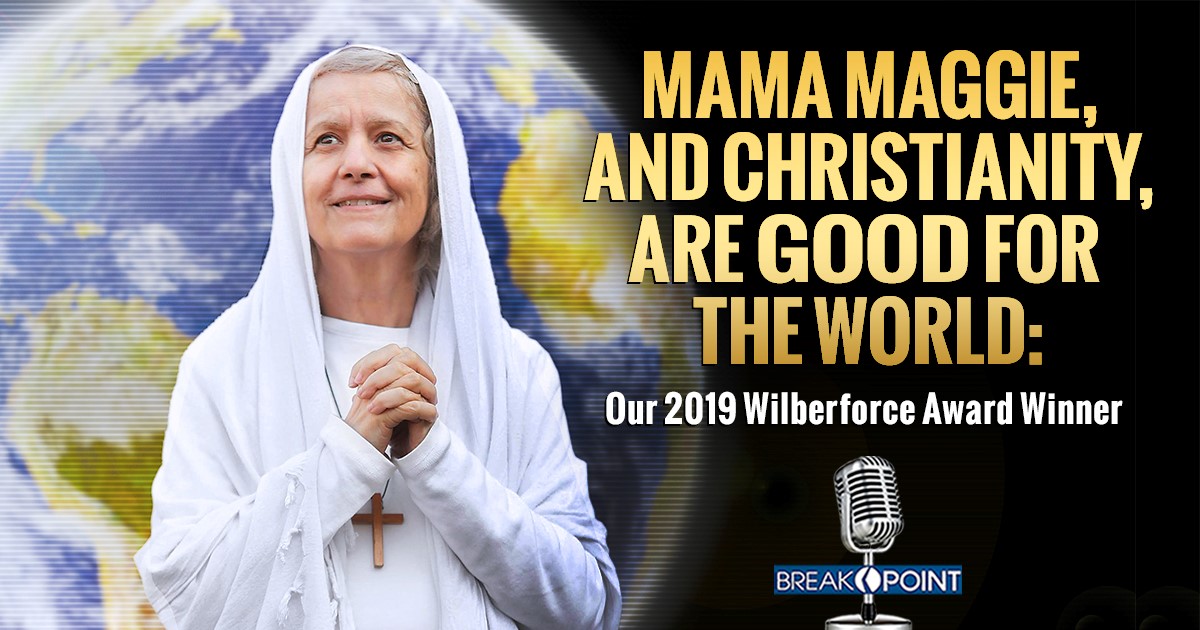 Is Christianity STILL good for the world? That’s the theme of our Wilberforce Weekend this year. We have an incredible lineup of speakers who will seek to answer that question from a variety of angles. But the most definitive answer may very well come from the 2019 winner of the William Wilberforce Award, a Coptic Christian known around the world as Mama Maggie.

Thirty years ago, Mama Maggie was a well-to-do Egyptian woman who loved traveling from Cairo to Europe with her husband for parties and shopping. But in her mid-thirties, she and a group of friends from church decided to visit one of Cairo’s garbage slums. Some 60,000 people live there, most of them Christians who gather and sort garbage in the most appalling conditions for just a few coins a day—barely enough to live on.

As she spoke with the parents and hugged the children in the garbage dumps, Maggie’s life was transformed. As Ellen Vaughn wrote in her biography of Mama Maggie, “Maggie fell in love with the privilege of being a part of their lives.” She began visiting the slums every day, and founded a ministry called Stephen’s Children, named for the first Christian martyr. Three decades later, Stephen’s Children now helps 33,000 children through home visits, camps, vocational training, schools, and medical care.

The stories that arise from this woman’s work are amazing. For example, a few years ago, Mama Maggie hugged a little boy named Karim. As she placed her hand over his heart, she knew at once something was wrong. Mama Maggie asked a Stephen’s Children leader to take Karim to her brother, who is a cardiologist. He discovered Karim had a hole in his heart.  He needed surgery to correct the problem, but his desperately poor family couldn’t possibly afford to pay for it.

That’s where Stephen’s Children stepped in; they paid for the entire cost of the operation. And once Karim recovered, ministry volunteers visited him regularly, brought the family food, and invited Karim to take part in a Stephen’s Children camp.

Then there’s the story of Sharif, another boy who attended a Stephen’s Children camp. Just before Mother’s Day one year, Stephen’s Children volunteers visited his home to give him a little money so that he could buy his mother a gift. But nobody was home. The leaders went back several times, although they normally didn’t do this. On their fifth visit, they saw Sharif arriving with a baby girl in his arms. The baby was sick, but her father had no money to pay for the medicine she needed.

Stephen’s Children volunteers gave Sharif the money, who immediately handed it over to his father. “Buy Baby Sarah whatever she needs,” he told him.

When Sharif’s father discovered how many times the leaders had come back to his house, he began to cry.

“For ten years,” he said, “I have never set foot in a church. I believed that God had forgotten me. But because of what happened today, I will go back to church.”

There are thousands upon thousands of other stories like this. In fact, I want you to know seven of them. Back in 2015, the world was shocked when 21 Coptic Christians were beheaded by ISIS terrorists. Each refused to renounce their faith. At least seven of those martyrs had attended Mama Maggie’s schools.

For her thirty years of serving others in the Cairo slums, the Colson Center is awarding the 2019 Wilberforce Award to Mama Maggie. Each year we seek to honor someone whose life and work echo that of the great British parliamentarian William Wilberforce, who labored for 40 years to banish the slave trade in Britain and reform a broken society.

Mama Maggie will be honored at our Wilberforce Weekend, May 17 through May 19, near Washington D. C. It’s the annual “family reunion” of the Colson Center. It will be a packed house of over 800 people. I hope you will be one of them. For more information about the weekend and the incredible work of Mama Maggie, visit www.wilberforceweekend.com.

Her loving work demonstrates, like only a life lived in service to Christ can, that Christianity indeed is still good for the world.