Robots in the Pulpit? - BreakPoint
Join us in helping to equip and renew the Church with a Christian worldview by giving before our fiscal-year ends!
Skip to content 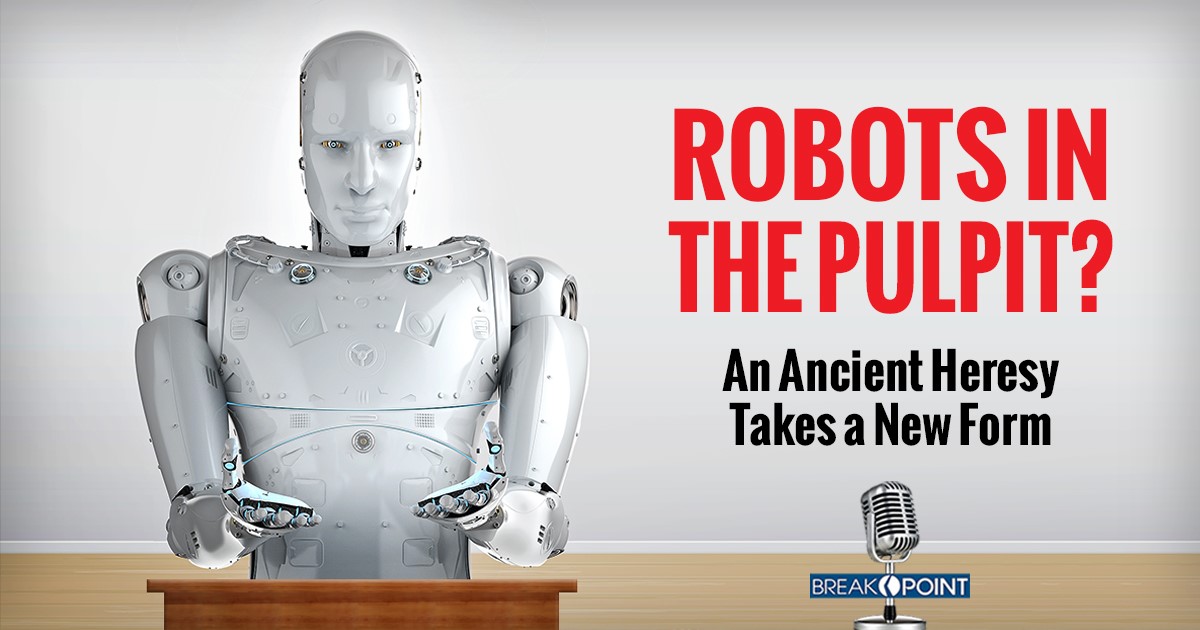 
Robots in the Pulpit?

If someone described a preacher’s style to you as “robotic,” you probably wouldn’t consider it a compliment. For worshipers at one Buddhist temple in Kyoto, Japan, however, robotic qualities are not a bug of their new clergy; they’re a feature.

The new “priest,” named Mandar, is an actual robot. For now, its clerical repertoire is limited to delivering the same sermon repeatedly. But its creators hope to use artificial intelligence to enable it to perform other duties, such as counseling.

It is tempting to dismiss the idea of robotic clergy as a publicity stunt or an example of Japan’s cultural eccentricity, but as an article in Vox suggests, “some cultures are more open to religious robots than others.” The article cites specific examples from Asian cultures deeply influenced by Buddhism. The differences between Eastern religions like Buddhism and biblical religions, especially how they understand God and His relationship to humanity, are significant.

As the temple’s steward told Vox, “Buddhism isn’t a belief in a God; it’s pursuing Buddha’s path. It doesn’t matter whether it’s represented by a machine, a piece of scrap metal, or a tree.” In Buddhism, chanting sacred mantras are not prayers to a personal deity. Instead, they are recited for psychological or spiritual benefit.

This is not the case for biblical religion. At the heart of Christianity is belief in a personal God, one with a will and a plan, who has gone to incredible lengths to make Himself known to His creation. Christianity, at heart, is not a moral path. It’s a personal revelation of who God is and what He wants from us.

Vox erroneously stated that biblical religions are “dualistic,” dividing the world into the “sacred” and the “profane.” In reality, that’s exactly wrong. The Bible divides up reality into Creator and creation – all of which is sacred space infused with His presence.

In Eastern religions, salvation means being released from the prison of material existence. For biblical faith, salvation is ultimately about the redemption of the created order, including the material aspects of it. This is the same material order that God repeatedly called “good,” according to Genesis 1.

God intends to fully restore His “good” creation to His original design, and He intends for redeemed humans to play an essential role in His work of restoration. This idea of repairing the world, as opposed to escaping it, is called “Tikkun Olam” in Hebrew. It’s an important part of what it means to be created in the image of God, and it’s an idea that has no counterpart in Eastern religions.

Of course, the ultimate means by which humans participate in the work of restoration is through the Incarnation. Instead of distancing Himself from creation, God became a full participant in it. By becoming, as Hebrews 2 says, “fully human in every way,” He reaffirmed humanity’s role in this story of redemption.

From the earliest days of Christianity, some were repelled by the idea that God would take on human flesh. For them, the flesh was irreparable, it was evil—and salvation came through an enlightenment kind of knowledge that allowed people to escape this messy and evil material order.

This was known as “Gnosticism,” from the Greek verb “to know.” It’s a heresy that keeps popping up, over and over again, throughout the history of the church. The Vox article offers an example or two.

Interestingly enough, religion scholar Elaine Pagels, in her book “The Gnostic Gospels,” offers the possibility that Gnosticism and Buddhism are somehow connected.

Whether that’s historically true or not, they clearly share fundamental beliefs about the nature of God and the kind of world we live in, beliefs that are irreconcilable with Christian orthodoxy. So much so, we can definitively say that any worldview that could embrace robotic clergy cannot be “Christian” in any sense of the word.

Any worldview that allows for robot clergy is one that disconnects divine personal revelation from its Source, reduces sin to simple ignorance, and replaces human salvation with a path deeply disconnected from the human condition. Robot clergy will work for Buddhism, but never for a religion built around a God who took on flesh.