Stand by the Kurds—and Our Christian Brothers and Sisters - BreakPoint
Join us in helping to equip and renew the Church with a Christian worldview by giving before our fiscal-year ends!
Skip to content 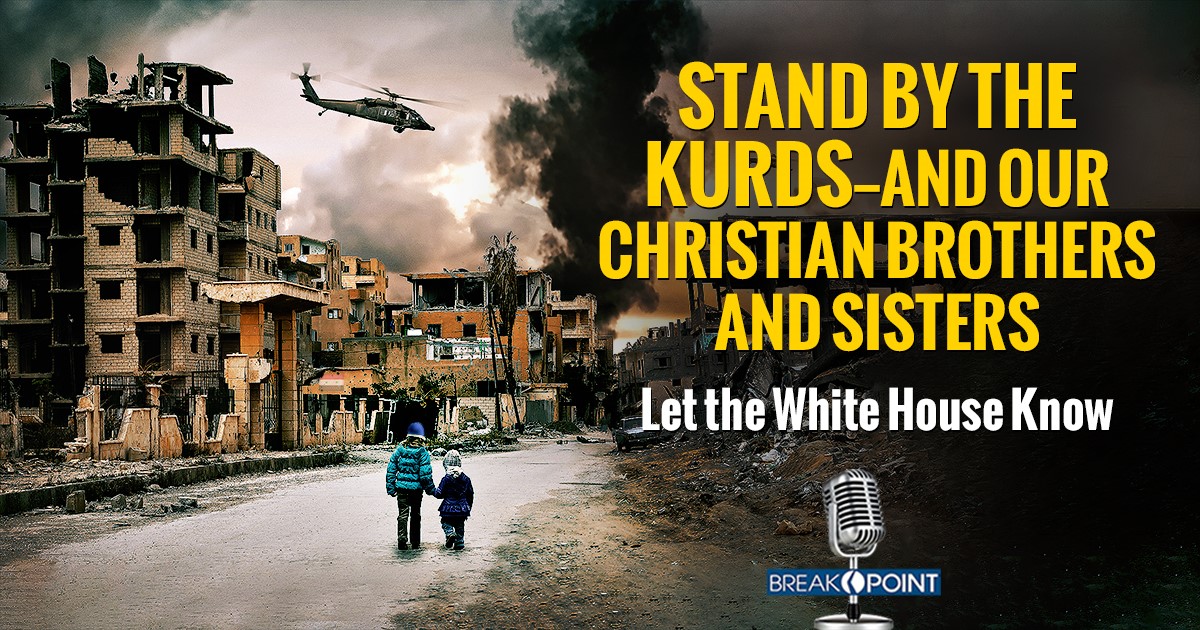 
Stand by the Kurds—and Our Christian Brothers and Sisters

On Sunday, President Trump announced that some 1,000 U. S. troops would be withdrawn from Kurdish-controlled regions of Syria.

Lawmakers, policy experts, and the media—liberal and conservative, Democrat and Republican—immediately reacted, condemning the announcement as unwise. While the President sees the move as fulfilling a campaign promise of getting us out of what he called “ridiculous, endless wars,” most others see it as a cruel and dangerous betrayal of the Kurdish Syrian Democratic Forces and their Christian and Yazidis allies.

The Kurds will now have to defend themselves against NATO-member Turkey, which views them as terrorists and wants them out of Syria. In fact, the President announced that Turkish forces would be “moving forward” into the region.

So, who exactly are the Kurds? They are a minority ethnic and mostly Islamic group in portions of Turkey, Iran, Iraq, and Syria. They have been loyal and effective allies to the U. S. in the fight against ISIS. The areas they control in Syria have become last-resort havens for persecuted Yazidis and Christians.

With U. S. troops out of northeastern Syria, the Kurds—and the Yazidis and Christians they protect—will be fully exposed, and therefore in grave peril. They will be forced to turn their attention and their fighters away from ISIS to confront the existential threat from Turkey. The resulting vacuum could lead to a resurgent and emboldened ISIS, much as President Obama’s unwise and impulsive withdrawal from Iraq led to a re-organizing of our enemies there.

And there’s an additional problem: The Kurds currently hold thousands of ISIS prisoners. The Administration assumes that Turkey will take control of them, but it’s far from certain if and how that would happen if Turkey launches an all-out assault on the Kurds.

Some 11,000 Kurds have given their lives in the fight against ISIS already. They need and deserve U. S. support. To withdraw that support now sends a message around the world about the U.S.’s reliability as an ally.

The President has responded to criticism of the withdrawal by tweeting he would “totally destroy and obliterate the Turkish economy” if it does something the President considers off-limits. As Mindy Belz pointed out on the BreakPoint podcast today, his threat points to the success U.S. sanctions had on Turkey in securing the release of Pastor Andrew Brunson last year. It’s not clear such sanctions would be as successful today. For their part, Turkey has rebuffed the President’s threat and is prepared to strike the Kurds.

For all the reasons evangelicals have had to applaud the Trump Administration over the past two years, from nominating conservative federal judges and Supreme Court justices to defending religious liberty to protecting the unborn, I have to say this decision is not one of them.

Evangelical Christians, who are key to the President’s reelection prospects, must make it clear that we expect the Administration to do all it can to protect persecuted Christians wherever it can. The largest towns in the region, Qamishli and Hasakha, are mainly Christian.

Working in conjunction with Kurdish forces while protecting the world’s most ancient Christian communities is something the U. S. must continue to do. Pulling U.S. troops out of northeastern Syria puts the lives of our brothers and sisters in Christ at risk, not only at the hands of a potentially resurgent ISIS but also at the hands of our ostensible ally in Turkey.

Christians must let the Administration know. See the resource links below to contact the White House, Secretary of State Pompeo’s office, as well as your representative and senators in Congress.

And today, on the BreakPoint podcast, Mindy Belz of WORLD Magazine fills out the complete picture about the region and why the President’s announcement stunned so many. Again, come to BreakPoint.org or download the Breakpoint Podcast to listen to this important interview with Mindy Belz.

And please, pray for our brothers and sisters in Syria and throughout the Middle East.