The Peace Cross and the Supreme Court - Breakpoint
Help make a bigger worldview possible for Christians around the globe with a year-end gift!
Skip to content 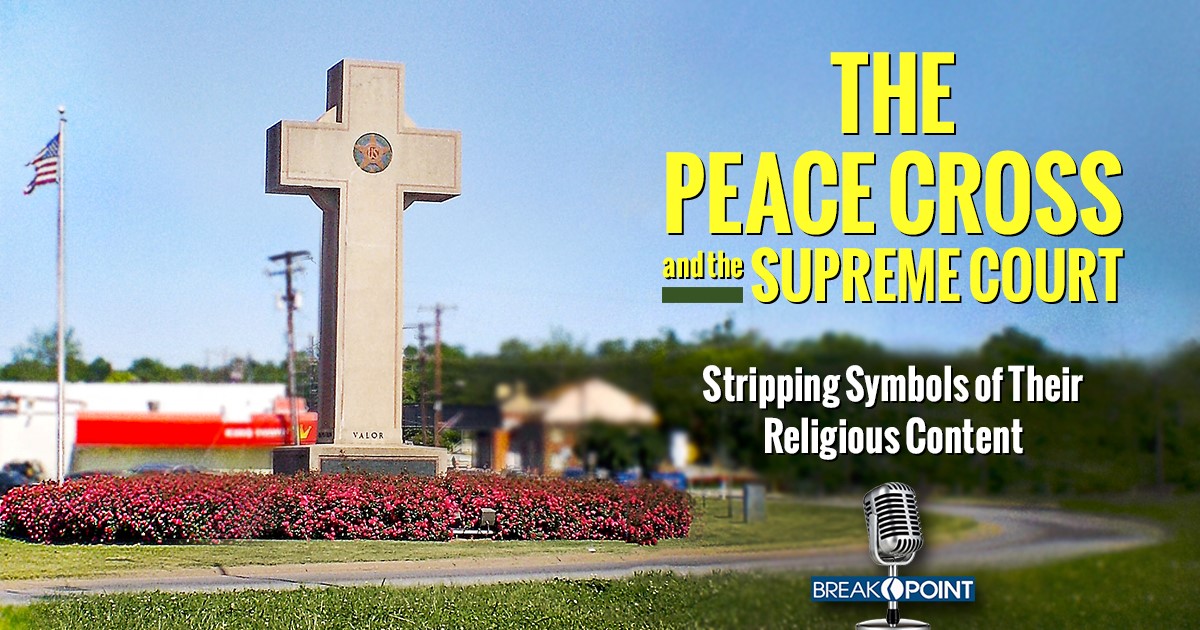 
The Peace Cross and the Supreme Court

Last September on BreakPoint, we told you about the constitutional challenge to a World War I memorial in Bladensburg, Maryland, known as the “Peace Cross.” The Cross was erected on private land in 1925 by the American Legion. It was to be a memorial to 49 men from that area who died in the Great War. Their names are listed on the plaque at the base of the monument.

In 1961, the state assumed control of the land, and therefore responsibility for the memorial’s maintenance. For more than fifty years, no one protested the Cross’s presence on public land or the state paying for its maintenance.

But in 2014,  the American Humanist Association challenged the constitutionality of the Peace Cross in federal court. They lost the initial case in Federal District Court, but they prevailed at the Fourth Circuit Court of Appeals.

In October, the Supreme Court agreed to hear the case, and this past Wednesday heard the oral arguments.

There was a lot at stake. If the American Humanist Association prevails, the implications would reach far beyond this memorial in Maryland to any and all memorials on public land everywhere in the country. Any of them with anything resembling a cross or religious symbol of any kind would be fair game.

The justices, or at least most of them, seemed aware of the stakes and a bit skeptical that after all this time the Peace Cross suddenly presented an immediate threat to our republic. Still, some of the justices’ comments were less than a ringing endorsement of the place of religion in the public square. Most notably Justice Elena Kagan, who as Solicitor General defended the presence of a cross in the Mojave National Monument, emphasized the historical context. At the time of its erection in 1925, she pointed out, crosses were common in war memorials and were not intended to convey a specific religious message. As she put it, “All the words on the memorial are words about military valor and so forth. So why in a case like that can we not say essentially the religious content has been stripped of this monument?”

For Kagan, crosses were “the preeminent symbol for how to memorialize the war dead at that time.”

In a somewhat ironic twist, it was the lawyer for the American Humanist Association who then insisted that “a large Latin cross can’t be stripped of its religious meaning. I don’t think it needs special words to . . . announce that this is . . . a religious symbol,” he said.

We should be sincerely grateful that, as The New York Times and the Washington Post both agreed,  a solid majority of the justices seem to be for allowing the Peace Cross to remain on this public land. If the case were to go the other way, we could be looking at a scenario raised by Justice Breyer: wholesale demolition of suspiciously-religious historical monuments across the country, possibly starting with Arlington Cemetery across the Potomac and its hundreds of thousands of crosses.

But the argument, like the case itself, underscores the allergy to religion that permeates Establishment Clause jurisprudence, especially from the left. To paraphrase the Apostle Paul, apparently the only kind of godliness  that’s “acceptable” these days is one that denies the power thereof. So religious symbols must be, as Justice Kagan put it, “stripped” of “their religious content” if it’s to pass constitutional muster. That would mean that the image of Moses found on the walls of the Supreme Court, must be nothing more than equivalent to the images of Augustus, Hammurabi, John Marshall, and Napoleon — a grouping that would surprise many rabbis, not to mention Moses himself.

So I pray that the New York Times and the Washington Post are correct in their reading of the justice. But we shouldn’t break out into our best end-zone celebrations just yet. Even a victory in this case could still leave the public square a little more naked.