The Problem with “Do Something!” - Breakpoint
Help make a bigger worldview possible for Christians around the globe with a year-end gift!
Skip to content 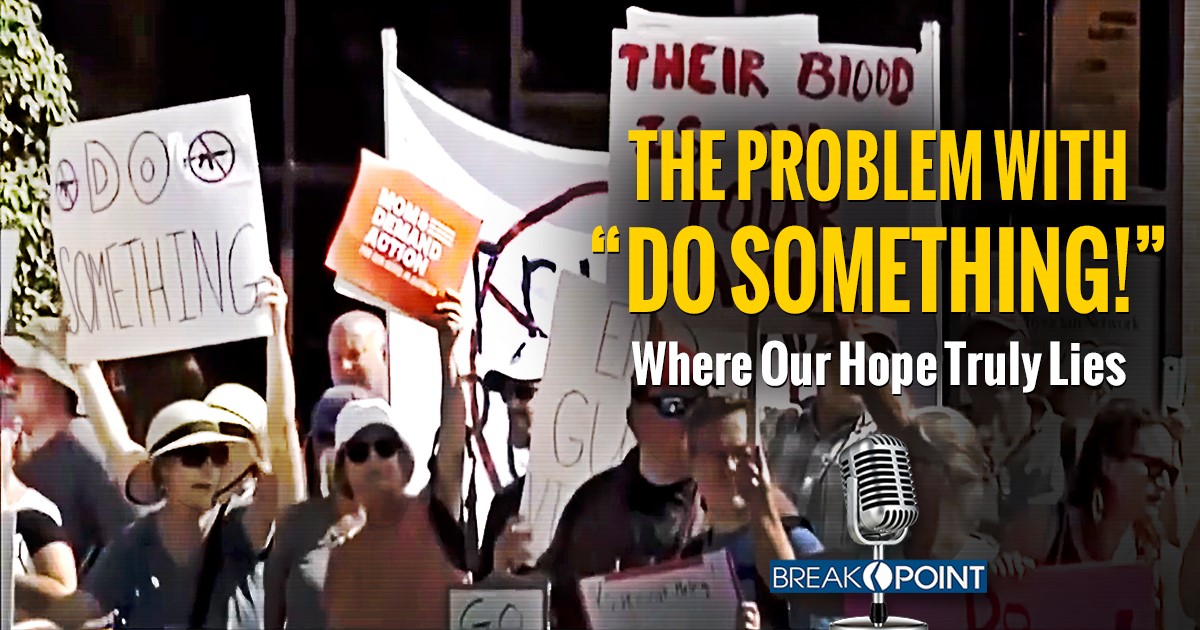 
The Problem with “Do Something!”

Americans are afraid… perhaps more than at any time since 9/11. It’s understandable. Despite the fact that most of us are safer today than we think, the sheer evil that’s behind a mass shooting or a violent attack is put right in our face by the 24-hour news cycle.

And then, of course, there’s the whole uncertainty of it all. Since El Paso and Dayton, there’s been a deadly knife attack in California, a highway shooting in Houston, and an armed guy in fatigues who walked into a Missouri Wal-Mart with 100 rounds of ammo.

When people are afraid, they either lash out (just watch the news or go on social media), or they look for something, often anything, that can save them from what they fear.

The public outcry in the last few weeks was articulated by what protesters demanded of the President during his visit to Dayton last week: “Do something! Do something!”

As I said to Warren Smith in our discussion this past Friday on “BreakPoint This Week,” I find the command to “do something” troubling on two levels. First, “do something” is a cry for help. It’s not a strategy or tactic. Doing something isn’t helpful if it’s the wrong thing or if it’s an irrelevant thing. Doing “something” might even be the worst thing to do. We have to know what to do, and that requires being clear on what the problem is.

The only thing made clear in all the debates since the most recent shootings and violent outbursts is that we’re not clear about what the problem is.

Second, the demand to “do something” is almost always addressed to the government. The demands are almost always directed to the President, the governor, or Congress. That says something troubling about us as a people: We are looking to government to fix all our problems.

The problem of alienated, often fatherless young men espousing either hateful extremism or nihilistic meaninglessness who aim their anger and violence at the defenseless? That’s not government caused, and it can’t be government fixed.

Our tendency to think that all problems are to be politically understood, are politically motivated, and can only be politically fixed is symptomatic of something Chuck Colson talked about frequently, and we still talk about on BreakPoint: The political illusion. But no policy, no political ideology, no bureaucracy can heal wounded psyches, rebuild the mediating institutions of civil society, provide meaning and a sense of belonging, or overcome hatred with love.

Those tasks belong to the very institutions that have been dismissed and even dismantled across our society: The family and the Church.

As Thane Bellomo wrote over at the Federalist, the decline of these institutions is “mirrored” not only in the rise in mass shooters, “but more broadly in a host of statistics that reveal an epidemic of despair.” As Bellomo points out, in the first 17 years of this century, suicide rates have risen 14 percent, and the death rate from drug overdoses increased by a mind-boggling 400 percent.

In the midst of that level of cultural chaos and in this current climate of fear, our hope is not in government or legislation, as important as those are.

As Warren Smith said during our “BreakPoint This Week” conversation, it’s gut-check time for the Church. God has appointed this time and this place for us to live out our faith, to bring the hope and peace of Christ to our friends, our families, our neighbors, our communities—even to the frightened, the hate-filled, and the alienated.

That’s the “something” we must do.