BreakPoint: The Vatican Responds to Gender Theory - BreakPoint
Join us in helping to equip and renew the Church with a Christian worldview by giving before our fiscal-year ends!
Skip to content 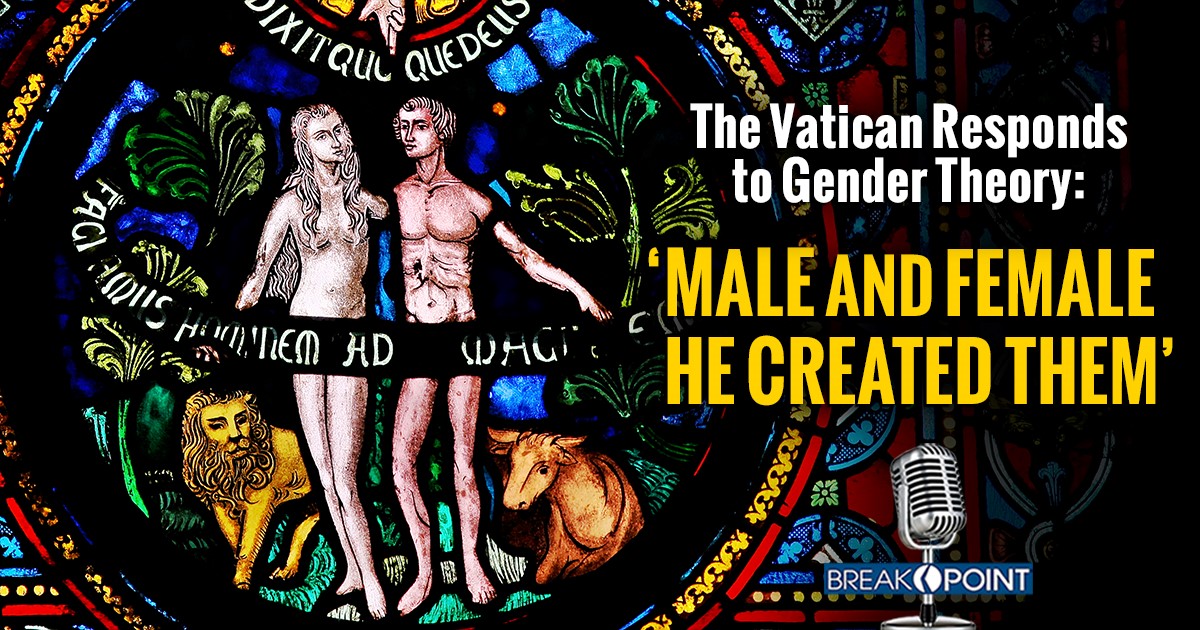 For years, LGBTQIA activists and advocates have proclaimed that their view of human sexuality and Gender Theory is historically inevitable, and that any and all who resist will be swept into the dustbin of history along with the racists.

Given the movement’s thorough sweep of cultural arenas and institutions, including the caving by some Christian denominations on marriage and sexuality, it’s not hard to see where their optimism and even arrogance on the matter comes from.

But they are wrong. First, you can’t be on the right side of history if you are on the wrong side of observable biological realities.

And second, a growing number of Christian ministries, universities, and denominations have publicly reaffirmed their commitment to a biblical view of sexuality and marriage, including both evangelical and Protestant bodies.

And now, just last week, the Vatican released a publication entitled, “Male and Female He Created Them: Towards a Path of Dialogue on the Question of Gender Theory in Education.”

That title may not be very exciting, but in the document, the Roman Catholic Church unequivocally rejects any gender ideology that denies the intrinsic biological differences between men and women, or that treats gender as something that people choose for themselves.

“Male and Female He Created Them” was quickly and roundly denounced by many who assumed the Catholic Church would eventually cave on human sexuality. After all, many proponents of the new Gender Theory and revisionist ideas about sexuality and marriage have long believed, and often stated, that Pope Francis was clearly on their side.

It turns out he’s not. In the document, the Pope is quoted as saying that Gender Theory “denies the difference and reciprocity in nature of a man and a woman and envisages a society without sexual differences, thereby eliminating the anthropological basis of the family.”

Another important aspect of the document is indicated by its subtitle. Just a few weeks ago, Georgetown Visitation Preparatory School, one of the oldest all-girl Catholic schools in the country, announced it would include announcements of same-sex unions in its alumnae magazine. It did this despite acknowledging that the Catholic Church “is clear in its teaching on same-sex marriages.”

Not only does “Male and Female He Created Them” leave no room for doubt as to where the Catholic Church stands on sexuality and gender, it aims this clarification directly at Catholic educational institutions like Georgetown Prep.

The document clearly lays out exactly why Gender Theory is incompatible with historic Christian teaching about the human person, and it’s therefore incompatible with any educational project that would seek to deny or alter the Christian teaching about the human person. “Male and Female He Created Them” is squarely aimed at education and educators, and insists that the family must “be recognized as the primary pedagogical environment for the educational formation of children.”

This task, which is called in the document “the formation of formators,” must shape education outside of the home, too. Catholic schools should be “an educating community in which [people can] grow in [their] humanity.” By the way, that should be true of all Christian schools.

Of course, nothing in the document, which was issued by the Congregation for Education, is particularly groundbreaking. Anyone who’s read Ryan Anderson or has listened to BreakPoint will be familiar with the anthropology the document clearly articulates. Still, it is another indication that predictions of historical inevitability are almost always a reflection of hubris more than anything else.