BreakPoint: The Victims of Words - BreakPoint
Skip to content 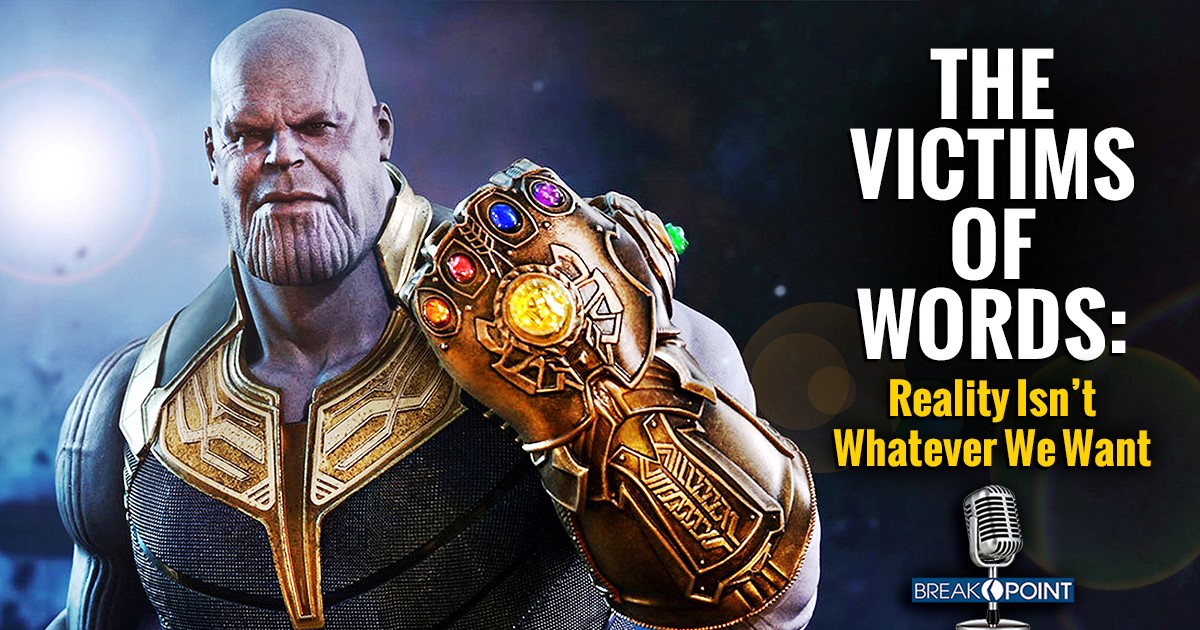 
BreakPoint: The Victims of Words

In one of Marvel’s recent blockbuster superhero movies, a genocidal alien-arch-bad-guy named Thanos acquires an “Infinity Stone,” which allows him to change the world around him at will. With this stone, he says, “Reality can be whatever I want.” Well, many today imagine they’ve got that same mastery over reality—not with the use of a stone, but through words. Redefining words, they think, would magically change reality. It doesn’t, of course. We don’t live in a comic book movie. In the real world, reality is stubborn. Even more, when our words don’t correspond to reality, someone always gets hurt. Or, to paraphrase Confucius, “When words lose their meaning, people lose…” Recently, we’ve seen several cases of people, especially women, losing the opportunity to win competitions they’ve worked hard for. WORLD magazine recently reported on several international weightlifting competitions where biological men calling themselves women entered women’s divisions and blew away the competition. The words used by these men to describe themselves didn’t change their massive bone structures or muscles, but they did deprive women of a chance at fair competition and victory. As did CeCe Telfer, who went from mediocre male track athlete to NCAA national women’s champion just last week. Another example of playing fast and loose with words as if it changes reality came from Supreme Court Justice Ruth Bader Ginsburg. Last week, the Supreme Court declined to hear an appeal by the State of Indiana to reinstate a 2016 law which banned abortions based solely on sex, race, or disability. The law also required that fetal remains be disposed of respectfully—not simply thrown in the garbage. The justices upheld the body-disposal provision, but declined to rule on the law itself. In a scathing response, Justice Clarence Thomas detailed the history of abortion as a tool of eugenics. In the process, he referred to women who are pregnant and are abortion-minded as “mothers.” This triggered Justice Ruth Bader Ginsburg, who retorted that “A woman who exercises her constitutionally protected right to terminate a pregnancy is not a ‘mother.’” As Princeton’s Dr. Robert George noted on Facebook, if a pregnant woman seeking an abortion isn’t a mother, how can the woman excitedly posting baby bump photos and receiving congratulations be a mother? What about the woman who wants to go through with her pregnancy but later decides to have an abortion, only to change her mind again at the clinic and has the baby? Does she go from being a mother to not being a mother, back to being a mother, again? Justice Ginsburg may think her words have the power to reshape reality, or as a former Supreme Court colleague of hers wrote, to “create [our] own concept of existence, of meaning, of the universe, and of the mystery of human life.” But when reality won’t cash our checks, it’s usually the most vulnerable who get stuck with the bill. When words lose their meaning, people lose… in fact, sometimes they even lose their lives. Consider a recent case described in USA Today. A “man” arrived at a hospital complaining of stomach pains. While the nurse treated “him” for diabetic complications, “he” went into labor and gave birth to a stillborn child. The “man,” it turns out, was a biological woman who identified as transgender. Incredibly, psychologists and transgender activists quoted in the article blamed the doctors and nurses for the preventable stillbirth, citing their “implicit biases” that only women can get pregnant, and then calling for better training. So, that’s what went wrong here? That’s why an innocent baby died? No. The baby died because whenever there’s a mismatch between our words and our world, there’s a victim. Reality is objective. “Mother,” “man,” “woman,” “male,” “female,” and “baby” are words that correspond to human attributes we can’t will or speak out of existence, because we didn’t will or speak them into existence. God did. Until we accept that, the victims of our word games will continue to pile up.     Download mp3 audio here.