Transgender Taboos - BreakPoint
Join us in helping to equip and renew the Church with a Christian worldview by giving before our fiscal-year ends!
Skip to content 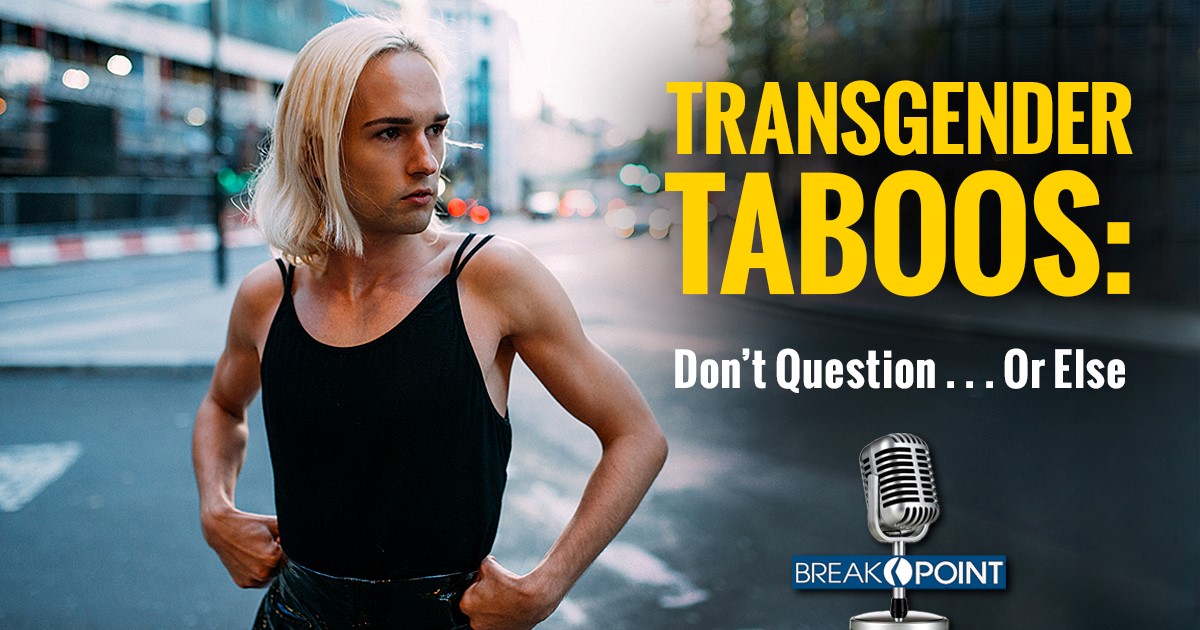 There are a growing number of people who transitioned from one gender to the other, only to regret it, and then try to reverse the process. Why aren’t we hearing their stories?

Here’s a fun fact: the word “taboo” came to the English language from natives on what is now the nation of Tonga. Believe it or not, when British explorer James Cook first visited the remote island, he noticed that certain things, in particular certain foods, were strictly off-limits. When he asked why, they replied these things were “taboo,” which meant “consecrated, inviolable, forbidden, unclean or cursed.”

Now in English parlance today, we tend to use the word “taboo” as a figure of speech or hyperbole. We don’t think of whatever is being referred to as literally being “consecrated,” “inviolable,” “uncleaned” or “cursed.”

A recent article in Canada’s National Post identified something it called the “new taboo.” It’s off-limits to even talk about the increasing number of people who, having undergone gender-reassignment surgery, now not only regret their decision, they want to reverse the procedure.

Five years ago, Dr. Miroslav Djordjevic, described in the article as “the world-leading genital reconstructive surgeon,” met a patient who had undergone the male-to-female surgery at another clinic but now wanted it reversed.

It turned out to be only the first of many stories Djordjevic would hear “about crippling levels of depression following their transition, and, in some cases, even contemplated suicide.” He told the National Post “It can be a real disaster to hear these stories.”

Why then are these disaster stories so rarely heard? Because they are taboo.

The very same article told readers about allegations that Bath Spa University in England turned down “an application for research on gender reassignment reversal” because the project was deemed ‘potentially politically incorrect.’” Or perhaps a more accurate word would be the one chosen by the National Post: “taboo.”

Recently on BreakPoint, I told you about a stunning piece in the New York Times written by a man planning to have gender-reassignment surgery. In it, he not only admitted the surgery would not make him happier, he admitted that the very prospect of the surgery made him more depressed and suicidal.

The author deserves our pity, but the decision to run the article without even questioning what on earth is going on, is the very definition of something being “taboo.” Questioning the sacredness and inviolability of the desire to transition invites the digital equivalent of the wrath of the gods that ancient Polynesian feared for violating taboos.

That’s hyperbole, you say. Is it? Because there are many more examples. Like the July/August issue of the left-of-center publication, the Atlantic Monthly. It contained an article that merely counseled caution in treating young children who claim to be transgender.

It didn’t matter that the author, Jesse Singal, was on solid scientific ground to urge caution. It didn’t matter that a 2013 study found two-thirds of pubescent children who experience gender dysphoria no longer have those feelings five years later. Singal and the Atlantic violated the taboo, and they were digitally stoned for it.

In fact, this cultural taboo is so strong, it can cost parents custody of their children. Recently, a Christian family in Ohio lost custody of their 17-year-old son because he wanted to begin hormone therapy. A family court awarded custody to the child’s grandparents, because they were more amenable to his desires.

Instead of asking the more obvious question—Can’t we just wait a year and not do anything drastic until he’s 18 and doesn’t need parental permission?”—the judge removed a minor from his home. This is taboo in action.

All who interfere with one’s desires to transition these days are simply considered cursed. Meanwhile, victims’ stories go unheard.