What We’re Missing About Mass-Shootings - Breakpoint
How can we respond to those around us with truth and love? Give today to receive this month's featured resource.
Skip to content 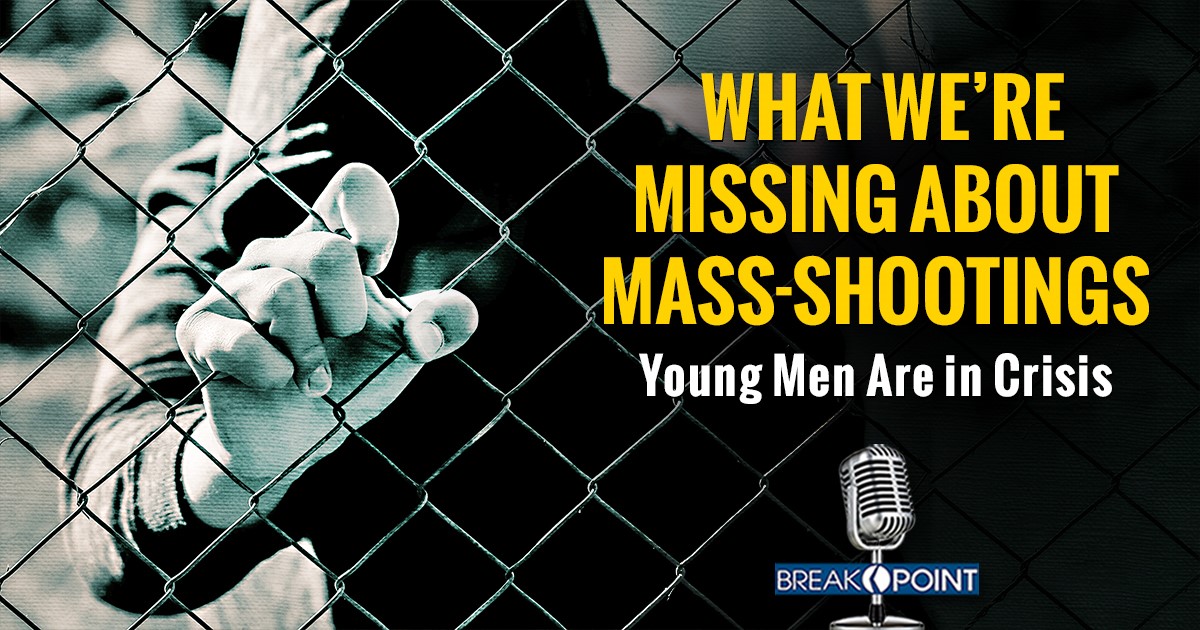 
What We’re Missing About Mass-Shootings

The state of our national discourse is, to put it mildly, discouraging and unhelpful, and the reaction to the recent shootings only amplified how bad it is. Once again, everyone took their place along partisan battle lines to pound the same old drums, but it’s past time we admit that there’s something deeper going on in America than too many guns, or too few guns, or violent video games, or the President’s rhetoric, or even the evil of white supremacy.

That’s not to say there are no good policy proposals out there to address these issues, which really do need to be addressed. As a Second Amendment guy, I could buy into something like what David French proposed last year in National Review: a system for family and employers to report warning signs and separate unstable individuals from their guns.

But, as French admits, the best that policy would do is keep troubled young men from acting on their violent impulses. It doesn’t address the young men themselves, or the source of those impulses. And that’s exactly the issue we can no longer ignore. Yesterday, I highlighted the crisis of virtue across our culture, and how that will lead to the loss of freedom. It’s an historical inevitability. Today, I want to zero in on the problem of men in our culture, especially young men. They aren’t okay.

Writing at the LA Times, professor of criminology Jillian Peterson and sociologist James Densley offer a revealing look at America’s mass-shooters. They’ve studied every shooter since 1966, and the vast majority have four things in common: “early childhood trauma and exposure to violence at a young age”; seeking “validation” in extreme communities, often online; openly admiring the work of prior shooters; and nearly all are longtime loners with an identifiable “crisis point” like getting fired or expelled from school. Oh, and by the way, they are men.

In fact, the young men who appear on CNN’s list of the “27 Deadliest Mass Shootings in U.S. History” have something else in common: almost all of them grew up without fathers.

In other words, with few exceptions, the signs that a young man is headed down a dark road overlap noticeably with signs we see across our culture that young men in general are not doing well.

Lacking strong role models and healthy social groups, increasingly left behind academically and vocationally, and floundering for a purpose in life beyond video games, countless males have sought solace in the only communities they can find—usually online—where the foulest kinds of hate, conspiracy theories, and nihilism await them.

Of course, these factors don’t always lead one to become a mass-shooter. For every young man catechized into some toxic radicalism (like Dylan Roof or the El Paso Shooter) or into nihilistic unbelief (like Dylan Klebold and the Aurora theater shooter), and then chooses to act on it with a gun, millions of others do not.

Still, that doesn’t mean they’re doing well either. Quite the opposite: our society largely fails to cultivate young men, to teach them about their fallen natures, and to morally form them to choose love over hate and courage over violence. Thus, the epidemics of addiction, aimlessness, depression, irresponsibility, perversion, selfishness, victimhood, and low expectations continue.

Until we face the fact that the root of our problem lies here, the fruit will continue to be bitter. Unless we rebuild the institutions of civil society that cultivate young men, there is no way forward.

We certainly won’t fix this problem through government policies or mindless distractions. Only the church, with its kingdom vision and distributed work force, has the necessary resources to target young men with truth, forgiveness, accountability, and hope.

And on today’s BreakPoint podcast, Shane Morris and I dive even more deeply into the issues confronting so many of our young men–and how the church can and must respond.