Chuck Colson's Last Address - Breakpoint
Help make a bigger worldview possible for Christians around the globe with a year-end gift!
Skip to content 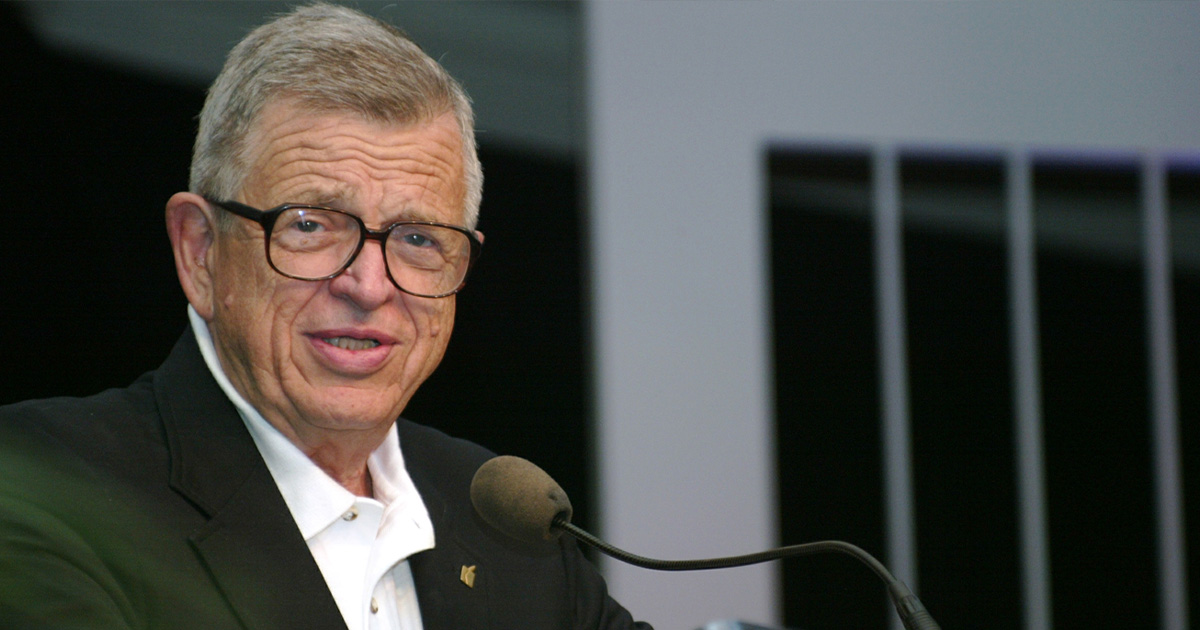 Ten years ago today, Chuck Colson met Jesus Christ face-to-face in eternity. As many would note later, Chuck Colson died in a way fitting for a marine, with “his boots on.”

Ten years ago today, Chuck Colson met Jesus Christ face-to-face in eternity. As many would note later, Chuck Colson died in a way fitting for a marine, with “his boots on.” I was sitting on the stage behind Chuck as he delivered what would be his final speech.

At the 2012 Wilberforce Weekend, Chuck collapsed on stage. He was taken by ambulance to the hospital where, on April 21, he died. His final words may have been delivered with less energy than some of us were used to hearing from Chuck, but with no less lucidity or passion. Here’s Chuck Colson:

My topic is the cultural environment today. Culture and a crossroads, which indeed it is, and what you’ve just witnessed with the Department of Health and Human Services attempting to impose a mandate on the Church, that the Church and Christian groups and religious organizations would have to provide insurance for things which violate our conscience and that we wouldn’t be allowed conscience for exemptions.

What’s extraordinary is that there haven’t been battles of religious liberty ever since the nation was founded and most of them have ended up in court decisions. Sometimes legislative. This is the first time in history, which is why Cardinal Wuerl here in Washington said, “This is the most serious invasion of the Church by government ever.” This is the first time it’s been done by a bureaucrat in a government agency simply writing it and then putting it out as law. Normally in a court case, you get a chance to argue both sides, but there wasn’t a chance for two sides to be argued this time. It was done by executive fiat.

This is a moment in which the Church has to learn how to defend itself against this sort of thing and do it in a way that is constructive with what we’re witnessing in our culture today. The HHS mandate is but the tip of the iceberg. It’s about the latest visible manifestation of a growing hostility towards Christianity mainly because—this has always been the case— government officials feel threatened by the power of the Church because we all worship a king higher than the kings of this Earth. And that’s seen as a threat, and we’re also seen as wanting to impose our views on people.

Don’t let them tell you that we don’t propose to impose anything. We propose an invitation to the wedding feast to come to a better way of living, a better way of life. And it is the great proposal. We couldn’t impose if we wanted to impose, and we don’t want to impose in a democracy. You can’t. So, we need to be very clear about who we are and what we do and why we do it.

What we’re seeing now is the full fruits that have come from 30 years of relativism, death of truth in the academy particularly and in public discourse, and the coarsening of public-discourse question of politics. Everybody looks at the elections and thinks the elections are going to settle this problem. Elections are important for who it is who serves in office. It makes a difference what kind of person that is and what that person believes.

So it comes right back to us. Look in the mirror: That’s where the problem is. And if we can through the Church renew the Church too, really bring healthy cultural influence, then there’s some hope that we can be changed. I think Eric is right that this is a moment. This is a moment when the time is right for a movement of God’s people under the power of the holy spirit to begin to impact the culture we live in. It’s desperately needed. This is why I’ve been spending so much time in recent years teaching biblical worldview because I think that’s at the root of our problems. Once we can get that understood by the Church: that it is a worldview and we have to live it and express it and contend for it.

Otherwise, it’s not going to be. You’ll see that continued deterioration of the culture and all that goes with it. So, I think  the responsibility has to be taken by the Church for a movement that will bring back the authority and strength and winsomeness of the Church, which then in turn affects the culture.

Chuck’s final passion was to see the Church embrace the fullness of the Lordship of Christ and be the Church in this cultural moment. Many of us took these final words, delivered at the 2012 Wilberforce Weekend, as a calling. The Colson Center exists to carry this mission forward.