New York’s ‘Reproductive Health Act’ - Breakpoint
How can we respond to those around us with truth and love? Give today to receive this month's featured resource.
Skip to content 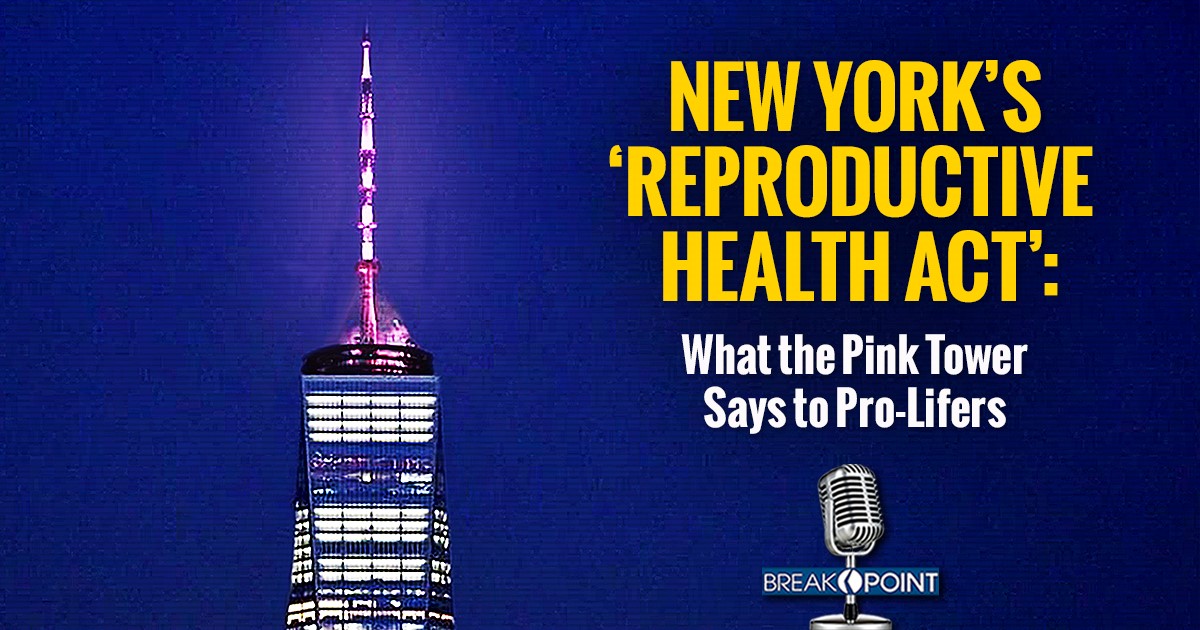 What the Pink Tower Says to Pro-Lifers

Last week, New York Governor Andrew Cuomo signed into law the most radical pro-abortion bill our country has seen in a very long time. The so-called “Reproductive Health Act” removes abortion and, get this, the murder of a pregnant woman’s baby, from the state’s criminal code.

It also allows any doctor, nurse practitioner, or even midwife to perform an abortion all the way up to the moment of birth, provided the mother’s “life or health” is at risk. That exception, which hearkens back to Doe v. Bolton  is so expansive you could drive a mac truck through it, and includes “all factors — physical, emotional, psychological, familial, and the woman’s age — relevant to the well-being of the patient.”

In other words, there’s no accountability or enforcement mechanism, and the healthcare provider has unfettered freedom to decide what constitutes a threat to “life or health.”

Let me be clear: New York has just made it legal for a fully-formed, eight-pound baby with a head of hair, fingernails, eyelashes, and a 100 percent chance of surviving outside the womb to be poisoned and crushed.

Governor Cuomo called this bloody, legal monstrosity “a historic victory for New Yorkers and for our progressive values.” He then celebrated by ordering One World Trade Center—A.K.A., the “Freedom Tower” –and other New York landmarks to be lit up pink. This “achievement,” he said, will “shine a bright light forward for the rest of the nation to follow.”

Princeton’s Robert George had this say on his Facebook page: “Until a few minutes ago, I had never felt physically ill as a result of watching something on television. But the video footage of New York legislators applauding and cheering the monstrous late-term abortion bill they passed…on the anniversary of Roe v. Wade literally nauseated me…What kind of people are we?…Where does this fanatical commitment to ensuring that the lives of children in the womb count for nothing—indeed less than nothing—come from? How did this contempt for human life insinuate itself into people’s hearts?”

How, indeed. But make no mistake: This isn’t anything odd or new. This sort of legislation is the end goal of a “pro-choice” movement that’s now fully comfortable with defending and even celebrating abortion in its most grotesque forms. This is the new norm for a movement that proudly “shouts” its abortions—a movement that left the old mantra of “safe, legal, and rare” back in the 1990s and now sees abortion not as a tragedy, but as an empowering, positive experience.

This is as far as you can take the logic of abortion without actually engaging in post-birth infanticide. It’s the inevitable conclusion of Justice Anthony Kennedy’s infamous reasoning in Planned Parenthood v. Casey that “At the heart of liberty is the right to define one’s own concept of existence, of meaning, of the universe, and of the mystery of human life.”

As I said last week on The Point, this is a moment to grieve, but it’s also a moment to mark and remember. This is the pro-abortion movement exposed. This is what happens when pro-abortion politicians gain control of an entire state.

It’s also a vivid lesson to pro-lifers to not put all our pro-life eggs in the U.S. Supreme Court’s basket.  As CNN reports, New York lawmakers intend this bill to be a safeguard for abortion access if Roe is overturned. If, by some miracle, a crop of new justices reconsiders the Court’s worst decision, the fight to end legal abortion is far from over. It continues on a state-by-state basis.

But know this: a new Marist poll confirms that New York’s law is wildly out-of-step with the nation as a whole. Seventy-five percent of Americans want abortion restricted to within the first three months of pregnancy.

And also know this: as Scott Klusendorf wrote at our recent BreakPoint symposium on the state of the pro-life movement, the overwhelming majority of the American public has never rejected the best pro-life arguments. Many have never heard them, which is partly why bad arguments for abortion continue to hold hearts, minds, and our culture captive.

Christians must learn to make the case for life powerfully and persuasively, and take every opportunity to do so, knowing that it can make a meaningful difference.