On Being Saved From Confusion: The Testimony of Rachel Gilson - BreakPoint
Join us in helping to equip and renew the Church with a Christian worldview by giving before our fiscal-year ends!
Skip to content 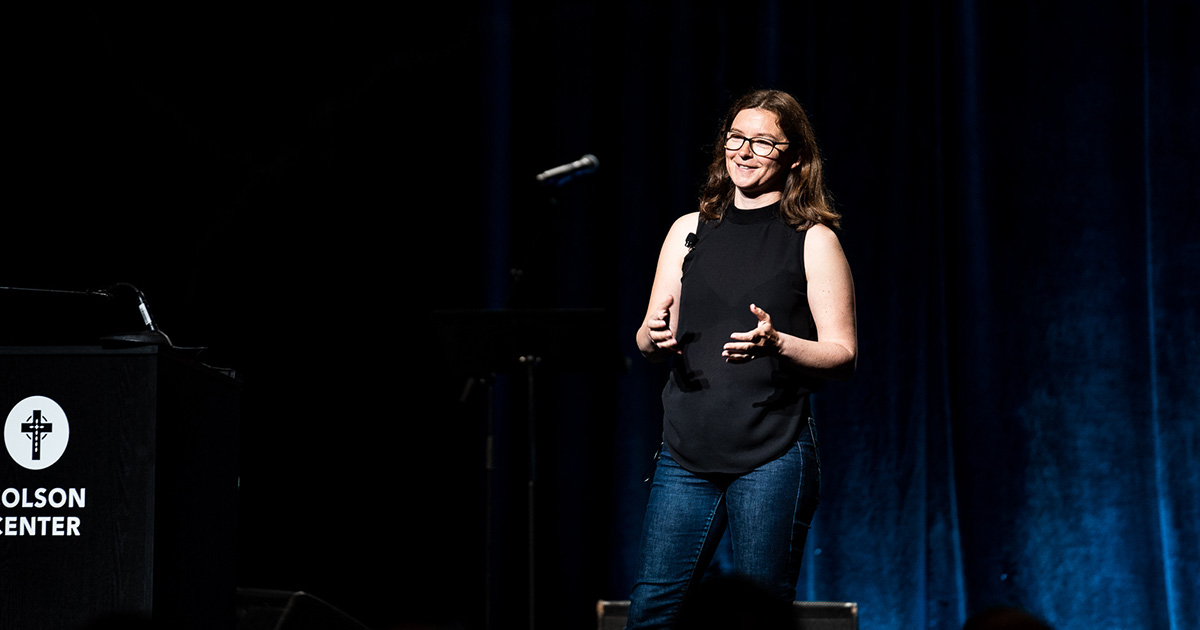 
On Being Saved From Confusion: The Testimony of Rachel Gilson

God promises by His Word, by His Spirit, by His people, to lead us out of confusion and to lead us into love and joy and peace and patience

Download/Print PDF
Many Christians settle for a reductionistic view of salvation, in which eternity is secured but the rest of life left untouched. The Bible, however, presents a much more holistic vision of redemption.
To explore salvation from a broader point of view, this year’s Wilberforce Weekend looked at “Life Redeemed.” The event was framed around three questions: What are we saved from, what are we saved to, and what are we saved for?
Rachel Gilson is the author of a fascinating book entitled Born Again This Way: Coming Out, Coming to Faith, and What Comes Next. She spoke specifically on something the Bible describes that we are saved from: confusion.
Here’s a portion of Rachel’s compelling message.
—
As I started having romantic and sexual relationships with other young women, I thought, “Oh, this is where home is for me.” So, I got to Yale, and I was like, “Oh no!” The girl I was dating at the time, well, she left me for this guy that lived in a van. And I was, like, “That is bad news, no matter what.” And also, I’m just sad, you know? So teenage breakups—very dramatic. I was basically dumped into the pit of an identity crisis, and never once did I think, “Oh, I should turn to Jesus” because I didn’t believe in Jesus.
So, a little while after that, I happened to be in the room of—I could call her a friend; she was more like an acquaintance—a non-practicing Catholic. And I remember standing in her doorway, and she was further into her room getting something, putting it in a bag, whatever. We’re going to walk somewhere. And she had a bookshelf next to her doorway, and one of my favorite hobbies is to look at people’s bookshelves and judge them, you know? So, I’m checking it out, looking up and down.
And there was a copy—there was a book on this shelf. The spine read Mere Christianity by C.S. Lewis, and so I thought, “Oh, I really want to read that book,” but I was too embarrassed to ask my friend for it. So, I just stole the book because, again, I had no moral code, right? My bag, it’s not that big—you can just slip it right in.
So, I was sitting in the library soon after that, reading Mere Christianity, and while I was reading it one day, I was just overwhelmed with the realization that God exists. I was trying to explain this to an atheist friend of mine recently. He’s, like, “Tell me again.” I’m, like, “I don’t really want to say.” I was sitting there, and it was clear to me suddenly—I don’t remember where, what chapter I was in, what page, anything like that, but I was just overwhelmed with the reality of God. And not like a store brand, you know, like Zeus or something, but the God who made me and who made everything and who was perfect.
It was like I could sense God’s holiness even though I didn’t know that vocabulary and the only thing I felt was fear. I’m arrogant. I’m cruel. I’m sexually immoral. I lie. I cheat. I’m reading a stolen book. It’s clear all of the chips are in the guilty category, right? I had no confusion at that moment either, but really quickly with that I also understood that part of the reason Jesus had come was to place Himself as a barrier between God’s wrath and me. And that the only way to be safe was to run towards Him, not away from Him.
It was lovely, but it also was really clear to me really soon in my walk with the Lord that my attraction to other women wasn’t going anywhere. And it’s been 18 years, and my attraction to women still hasn’t gone anywhere. So, it was where the confusion actually entered in. I was, like, “How, how am I supposed to thrive in Christ when these attractions aren’t gone?” And the Lord kept pushing on me at this time. Like, “Hey, if you’re only willing to obey when you both understand and agree, maybe you’re actually serving yourself as God and not me.”
Probably many of you experience other places where you feel confused because there’s something the Lord says and it doesn’t seem to line up with you intuitively. There’s maybe some sin that you love, that you don’t know how to—you don’t know how to part with. And I would just say again and again, the only place of safety is found in Him and in His Word. And He promises by His Word, by His Spirit, by His people, to lead us out of confusion and to lead us into love and joy and peace and patience, into the obedience of faith that He’s calling us to.
—
That was Rachel Gilson, author of a book called Born Again This Way. To hear more of Rachel’s message, and other speakers from this year’s Wilberforce Weekend event, “Life Redeemed,” including Os Guinness, Nancy Guthrie, Jim Daly, Monique Duson, and others, go to www.wilberforceweekend.org.