Pray for Ukraine - Breakpoint
How can we respond to those around us with truth and love? Give today to receive this month's featured resource.
Skip to content 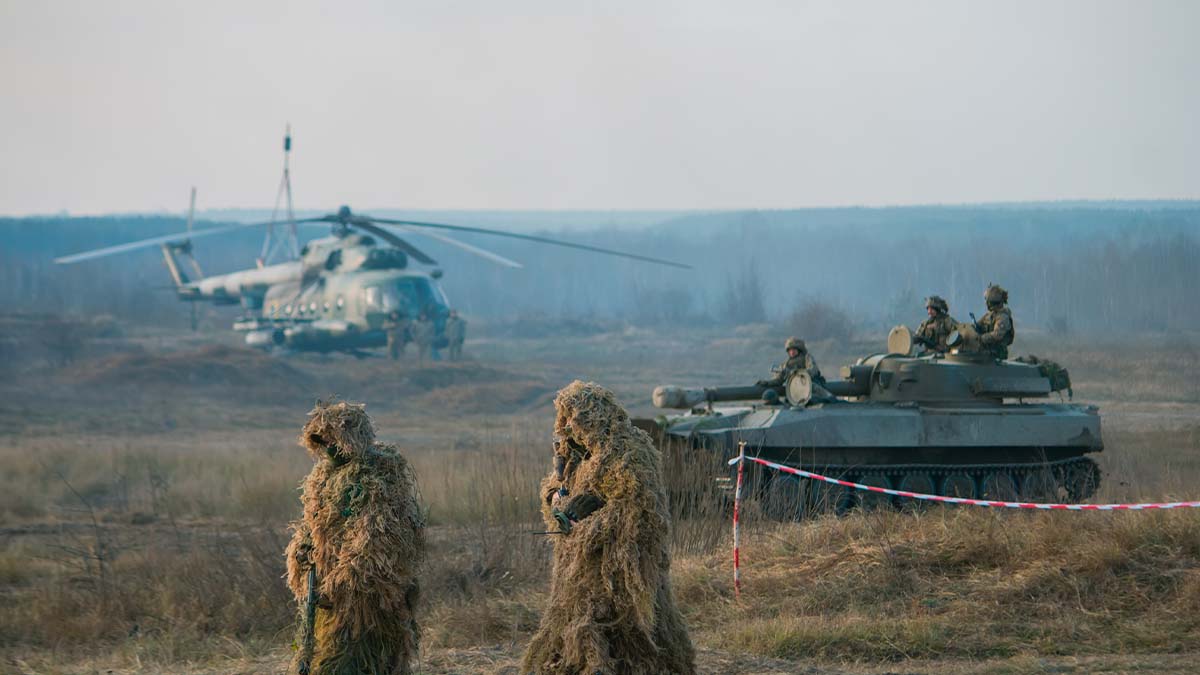 Where can hope be found in such dark days? As was from the beginning, is now, and ever shall be...only in Christ.

Two days ago, we talked about the rumors of war, fearing that the peace long enjoyed in the West could be broken. That fear has become reality. As an American official told ABC News, “You are likely in the last few hours of peace on the European continent for a long time to come.”

After weeks of Moscow’s saber rattling and vain promises that they had no designs on Ukraine, the Russian army has invaded its neighbor. Few were surprised, given the amassing of 200,000 troops on the border. Vladimir Putin made his intentions clear through theatrically executed meetings at the Kremlin where he walked his advisers through a script of dubious historical grievances and attempted to justify his recognition of the independence of territory inside Ukraine that Russia already controlled.

At the same time, especially at this time in history in which wars are witnessed by the world in real time, it is hard to believe what we are all now seeing. Even up to the very end, there were pundits and politicians suggesting that the Russians would not take such a risk, and Russian officials continued to call warnings of the impending invasion “American propaganda.”

And, there’s the old military saying that no plan survives contact with the enemy. Putin certainly knew that invading his neighbor would make his nation a pariah in the world community. So, surely, he wouldn’t actually do it, would he?

He would and he did. Using an alleged call by the newly “independent” regions for aid against the “terrorist” actions of the Ukrainians as pretext, Putin ordered Russian forces into Ukraine. He claimed his actions were to prevent a humanitarian crisis from the supposedly Nazi-inspired government in Kyiv, even though that government had a Jewish president.

Although most pre-war estimates were that he’d issue a smaller attack, enough to seize just part of Ukraine and place a pro-Moscow puppet in charge, the Russian attack has hit all across the nation.

As of this writing, Russian forces are said to be in control of the Kyiv airport and the infamous Chernobyl nuclear plant and appear to be making progress out of Crimea in the South and toward Kharkiv in the East.

Our news feeds are showing the devastation in real time. The low-flying Russian plane, flinging missiles into resident neighborhoods with a child crying in the background; the fathers saying goodbye to their children as they head back to the front; the massed helicopter attack, looking like something out of the movie Red Dawn.

It’s far from clear what tomorrow will bring. Maybe, somehow, Western sanctions will force the Russians to back down. Maybe the Ukrainians hardened resistance will enable them to outlast their foe. Maybe the Russian people will finally sicken of Putin’s despotism and demand a new regime. Maybe it will all spiral out of control to the point that Europe, America, and other nations will have to get involved. All we do know is that before all is said and done, tens if not hundreds of thousands of people will be dead for the sake of Putin’s vanity.

Where can hope be found in such dark days? As was from the beginning, is now, and ever shall be…only in Christ.

When Christ was on Earth, He offered hope to people whose situation was more defined by fear than the affluence we’re all used to today. He knew that their world would, in fact, be further rocked by turmoil, the likes of which they’d never seen. And He knew He would not be with them, at least not in person.

In Matthew 24 Jesus issued a somewhat vague warning about how bad it could get. Wondering what His words meant, His disciples asked for further direction, clarification, and hope. This was Jesus’ reply:

“See that no one leads you astray. For many will come in my name, saying, ‘I am the Christ,’ and they will lead many astray. And you will hear of wars and rumors of wars. See that you are not alarmed, for this must take place, but the end is not yet. For nation will rise against nation, and kingdom against kingdom, and there will be famines and earthquakes in various places. All these are but the beginning of the birth pains.”

Jesus pulls no punches. He issues no false promises of world peace. He assures them that there would be wars, troubles, and calamities, and when they did come, they’d be just the beginning. Still, despite the impending chaos, Jesus said that it was possible not to lose our way. Or, as He put it in John 16:33, “I have said these things to you, that in me you may have peace. In the world you will have tribulation. But take heart; I have overcome the world.”

Often recently, I’ve been reminded of something about prayer, especially when we are tempted to wonder, “Other than pray, what can I do?” Praying is doing something. In fact, it’s the most important thing.

The Anglican Church in Dublin, Ireland, has crafted a prayer quite fitting for this moment:

O Lord our Governor, whose glory is in all the world:

We commend to your merciful care the people and government of Ukraine that, being guided by your providence, they may dwell secure in your peace.

Grant to their leaders and all in authority, wisdom and strength to know and to do your will. Fill them with the love of truth and righteousness,

and make them ever mindful of their calling to serve their people;

through Jesus Christ our Lord. Amen.

And, another prayer worth praying in this moment:

Grant, O God, that your holy and life-giving Spirit

may so move every human heart in the nations of the world,

that working and witnessing together,

we may live in justice and peace

and change the hearts of those who would make for conflict and war;

through Jesus Christ our Lord. Amen.