Putting Christ Back Into Christmas - BreakPoint
Learn how to make abortion unthinkable by giving your gift of any amount today!
Skip to content 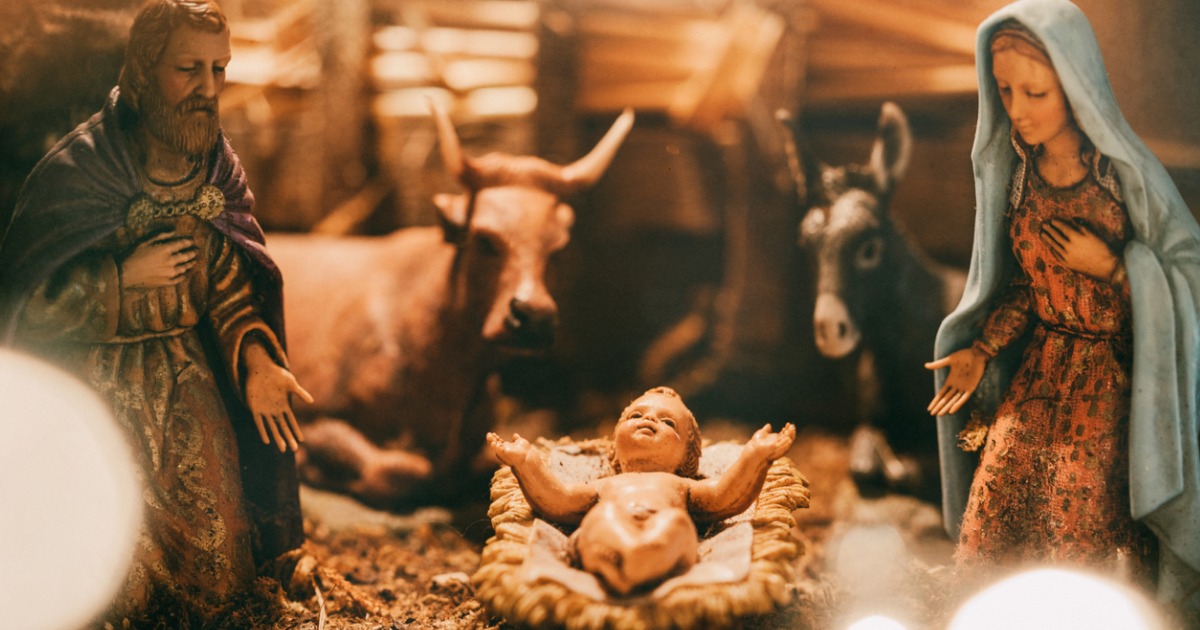 
Putting Christ Back Into Christmas

For the word of God is living and active, sharper than any two-edged sword, piercing to the division of soul and of spirit, of joints and of marrow, and discerning the thoughts and intentions of the heart. And no creature is hidden from his sight, but all are naked and exposed to the eyes of him to whom we must give account. – Hebrews 4:12-13

Each holiday season, the cry goes up from concerned citizens to put “Christ back into Christmas.” This is a worthy goal. Normally, this is a matter of countering secularizing trends which want to strip the holy season of its religious background, making the celebration of Jesus’ birth into a tepid Winterfest, where even “Happy Holidays” is too Christian. Sometimes it veers into a quest to de-commercialize the festivities, making it more Isaiah’s “Holy, holy, holy” than the mall’s “Buy, buy, buy.”

In and of themselves, these things are good in intention. The tricky thing is how well these noble goals play out in real life. Our anti-secularism can all too easily become subsumed into the fractiousness of the culture wars, leaving the reality and wonder of Christ’s incarnation in the shadows yet again. Anti-commercialism can also become another cultural casualty, where the push against materialism morphs into an anti-capitalist screed.

When we begin to use the birth of Christ as a prop for our agendas, even good and noble ones, we lose the power and purpose of His coming and make the glory of the incarnation into a tool for our all too temporary cultural and political causes. The point is not that there are not praiseworthy causes which are aided by appealing to the Christmas story to encourage the moral improvement of our society but rather that such improvement must and can only come when we put the intentions of God and the reality of His revelation in the driver’s seat of our biblical interpretations.

For the last couple of years, a meme has made its rounds on social media, calling people’s attention to another worthy cause. At first glance, it looks like nothing more than a typical manger scene, except that something’s missing. Actually, a lot of things are missing. It has the stable and a few animals, but the people are all gone. The caption reads something to the effect of “A Manger Scene without Arabs, Africans, Jews, Poor People, or Refugees.” The point being to show that the first Christmas wasn’t as white and wealthy as some folks seem to think

This is just silly. Granted, reminding people that Mary, Joseph, and Jesus weren’t rich Anglo-Saxons is a good goal, a point I’ve made before, but the rest of the meme doesn’t make any sense at all. To have a stable empty of people, all it’d have to say is it was a manger scene with no Jews. There were Jews there, of course, and Joseph’s construction worker income and the shepherds’ nomadic lifestyle likely didn’t earn them a place in the Judean version of “Forbes.”

But, Arabs, Africans, and refugees? That’s where this goes off the rails.

Much like the term “Hebrew,” “Arabs” began as a general description of various groups in the Ancient Near East, only later coming to refer to a specific ethnicity. The term “Arab” in the ancient world was more of a social designation referring to desert dwellers, rather like our term Bedouin. In fact, the word is related to the Hebrew for desert and “mixed multitude.” Not exactly what the meme-makers had in mind.

The ethnic group known to us as “Arabs” were, in the time of Christ, still in, well, Arabia, the vast, seemingly empty land of sand, sun, and heat, to the south of the Fertile Crescent and east of Judea. These sons of Ishmael did not emerge from this region until the AD 600s, when they came, bearing not gifts for the newborn Christ but the sword, as they conquered the remains of the Byzantine and Sassanid Empires.

We could try to say that the shepherds were Arabs, either socially, as people who lived outside the city, or ethnically, as immigrant people coming in from the desert. However, there are two problems with this. First, given that this was the City of David, and David was himself a shepherd in this same town centuries before, there’s nothing to suggest that being a shepherd was somehow separate from being a part of the Bethlehem community. Second, there’s nothing in the text to indicate that these shepherds were outsiders, ethnically speaking. These were members of the community who made their living as their ancestors had done for centuries, tending to flocks and herds.

On the other hand, I suppose we could argue that the Magi were Arabs. This, too, is a stretch. Frankly, nobody really knows where the Wise Men came from. Most suggestions put them as hailing from Mesopotamia. The ancient civilizations in today’s Iraq and Iran put great stock in fortune telling and astrology, as seen in the accounts of Daniel, but while we today often think of these lands as Arab countries, they would not have identified themselves as such, but as Babylonians, Assyrians, Persians etc.

This brings us to the next group of absent manger scene denizens: Africans. Now, I know that everybody’s manger scene growing up had three Wise Men, a white guy, a vaguely Middle Eastern guy, and a black guy. Setting aside for the moment the point that the Bible never says that there were three Magi (or that they were kings), there’s nothing in the text to suggest this tripartite ethnicity with the visitors from the East.

It was only centuries later that European and Ethiopian legends began to arise suggesting both names and national origins. The upshot being that the suggestion of an African Wise Man has no more basis in the Bible than a blonde Mary. All we know is that they came “from the east,” effectively ruling out both whites, who lived to the northwest, and Africans, who lived to the southwest.

Now, the Bible does talk about Africans, likely more so than it does about whites. There’s the wonderful account of Ebed-Melech, the Ethiopian from the Book of Jeremiah, a man with no name aside from “Slave of the King,” a foreigner who yet stood up for the prophet of God when Jeremiah’s life was in danger from the people of God. Then there’s the account in the Book of Acts, where another unnamed Ethiopian royal servant becomes the first Gentile to come to faith in Christ. However, accepting European legends about the Wise Men in place of the biblical testimony places human innovations over divine intentions.

Finally, we come to the refugees. As useful and well-intentioned as it may be to portray Mary and Joseph as refugees fleeing Roman or Herodian persecution, they simply weren’t. There’s a partly reasonable case to be made that even if they weren’t refugees in Bethlehem, their subsequent flight to Egypt makes them refugees. I see the point here, but I also don’t buy it.

Mary and Joseph weren’t fleeing general social unrest or starvation or ethnic oppression; they were trying to get away from an assassination attempt. This was a danger unique to this one family, and while others suffered as a result, the targeted nature of the threat makes the refugee label unwieldy.

Yes, they were fleeing from their homes in the face of danger, and this is analogous to refugees, but only analogous. If all it takes is geographic translocation from the negative to the positive, then any emigration gains refugee status. Then, mob goons in witness protection are refugees and so are criminals on the lamb from the law and despots ousted from their own lands. To make Mary and Joseph refugees is to expand the definition of refugee to the point of impracticality.

However, since it’s the time of Christ’s birth at issue here, the simplest refutation of this point is that there is no sense in which they were refugees on that holy night when Christ was born. As others have pointed out, even the image the harried family desperately seeking shelter in the gathering darkness, only to be turned aside by heartless innkeepers is on shaky biblical ground. Rather than cast out among the animals as an object lesson for money-grubbing Americans, Jesus was likely born in the family area of the home of relatives.

Yes, they were going to the Bethlehem because of the actions of a foreign and oppressive power, but this was to register for taxation, not to avoid persecution or famine. They were Jews moving from one Jewish area to another, with the second place being something of a homecoming for Joseph. There was no danger in Nazareth they hoped to escape and no sanctuary in Bethlehem they wished to secure.

So, where does this leave us? Is it a good and righteous thing to show the not-whiteness of that first Christmas? To see the humanity in Arab faces when our culture all too often see only the hated enemy? To be concerned about the disproportionate suffering of Africans and to highlight their place in God’s Word? To challenge people to consider the plight of those the Bible calls sojourners?

Of course this is a good thing! What’s more, there are ample Bible verses encouraging each of these things. But, just as it is wrong to read Western cultural customs and mores back into the biblical text in when it comes to Eurocentrism and American nationalism, it’s wrong to make the words of Scripture subject to our contemporary cultural battles.

Once we start doing that, we’re no longer being Christians or adhering to the Christian Worldview. Then, we’re like the ancient Israelites with their Golden Calf, worshiping the God who’d brought them out of Egypt, but done up in their own desires, their own intentions, and for the sake of their own battles. Then, we’re like any medieval monarch who claims God’s blessing on his dreams of conquest and acquisition. Our noble causes make just as easy an idol as any tyrant’s greed.

When we hear God’s Word, it must not be so that we may glean some anecdote to bolster our previously established goals. Nor should we ever only read the Scriptures to find out what we already believe about life. Instead, we must let His revelation speak for itself, even in uncomfortable ways, even in ways which threaten our most cherished ideals. God’s Word is a sharp sword, never a plaything for our pet causes, no matter how prized they are.