The Point: Solzhenitsyn Stuns Harvard
Help make a bigger worldview possible for Christians around the globe with a year-end gift!
Skip to content 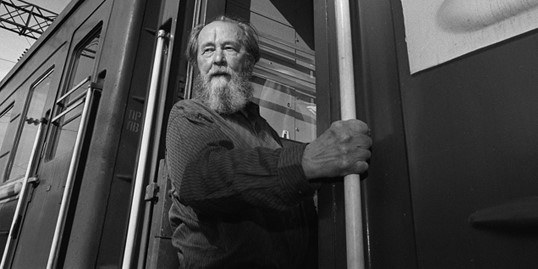 Harvard didn’t see this coming. Forty years ago, Soviet dissident and literary giant Aleksander Solzhenitsyn delivered a thunderbolt of a commencement address at Harvard University. Survivor of the Soviet GULAG, a fierce opponent of communism, Solzhenitsyn stunned his elite audience as he took aim at the disastrous social and worldview trends happening in the West. He bemoaned that Western societies had given “destructive and irresponsible freedom . . . boundless space.” By which he meant license, what Chuck Colson called freedom without virtue. Then he went after the Western appetite for “decadent art.” Finally, he argued, no healthy society or culture lacks great statesmen. Solzhenitsyn was prophetic. But sad to say, the West has largely ignored his voice. Irresponsible freedom? Check. Decadence? Check. Now go through your mental checklist and see how many great statesmen or stateswomen you can name these days. Come to BreakPoint.org for more on Solzhenitsyn’s stunning address, including a BreakPoint commentary.   Image: I, Evstafiev, CC BY-SA 3.0, https://commons.wikimedia.org/w/index.php?curid=3428690