Truth Changes Everything - Breakpoint
How can we respond to those around us with truth and love? Give today to receive this month's featured resource.
Skip to content 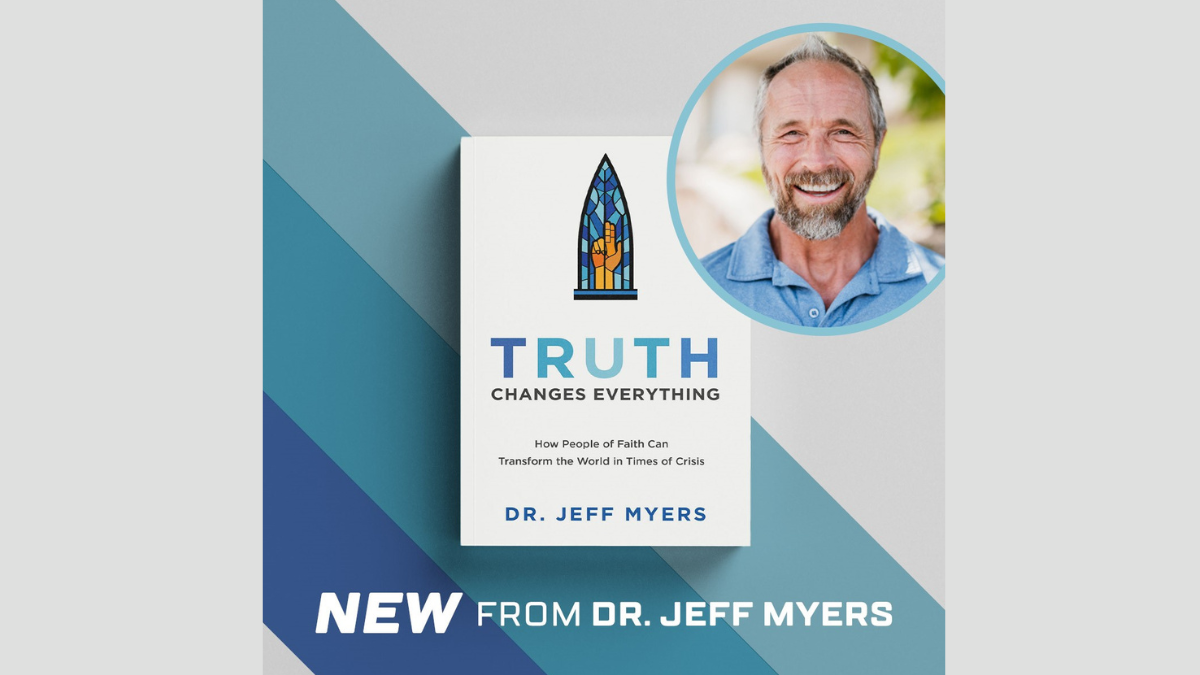 In Truth Changes Everything, Jeff Myers’ skill to teach through stories is on full display. Ultimately, he demonstrates that these amazing stories happened because of what is true about the world and how followers of Christ oriented their lives to that truth.

What kind of world would unfold if smart, determined people lived as if Jesus really was the source of truth? That question shapes a new book by my friend Dr. Jeff Myers, president of Summit Ministries. Truth Changes Everything: How People of Faith Can Transform the World in Times of Crisis is a book badly needed right now.

As Jeff writes, even among Christians, the percentage who believe truth can be known has shrunk to around 50% . Seventy-five percent of young adults say that they are unsure of their purpose in life, and fully half agree that there is “no absolute value associated with human life.”

Yet, despite this depressing but accurate picture, Truth Changes Everything is full of hope. After all, Christians in every time, place, and age have faced trials, setbacks, and difficulties, most greater than our own. Yet, in the midst of those moments, the light of Christ shines brighter still.

In one example particularly relevant on the heels of COVID-19, Myers describes how Christians faced the bubonic plague in 14th-century Europe. One-third to one-half of Europe’s total population died during the Black Death, and as one contemporary wrote,

One man shunned another … kinsfolk held aloof, brother was forsaken by brother, oftentimes husband by wife; nay, what is more, and scarcely to be believed, fathers and mothers were found to abandon their own children to their fate, untended, unvisited as if they had been strangers.

Yet, in the face of this calamity, many Christians lived differently. St. Catherine of Siena was an example of someone who, when the plague reached her city in 1370, cared for its victims, changed linens, provided food, prayed, and listened to deathbed confessions. As Myers reports, the mortality rate for clergy at this time was far higher than the general population, but their lives launched a revolution in medicine which laid the foundations of our modern hospital system.

“Why run toward suffering rather than away from it?” asks Myers. Because of what is true about suffering: “in suffering we draw near to God, as he has drawn near to us through Jesus. If you want to be with Jesus, you sit with the suffering. That’s where Jesus is.”

Another example involves faithful witness of Jesuit missionaries to China in the 1600s. Under threat of expulsion, they were saved by the emperor’s appreciation of their scientific excellence, a trait born of deeply Christian convictions. One of the truths about the physical world, which they believed and applied, is that it is not random, nor is it subject to superstitious whims of lesser deities. Instead, it reveals God’s precision, order, and love of beauty. In a particularly dramatic showdown, Father Ferdinand Verbiest successfully predicted the next solar eclipse. When the emperor’s court astronomers were unable to do the same, the emperor issued an edict of tolerance for Christians, and made Verbiest his personal advisor. Verbiest would write later in his book Astronomia Europaea, “Christian Religion in China is justly represented as a most august queen who appears publicly with her arm leaning on Astronomy.”

In Truth Changes Everything, Myers’ skill to teach through stories is on full display. Ultimately, he demonstrates that these amazing stories happened because of what is true about the world and how followers of Christ oriented their lives to that truth. At the same time, though academically sound, this is not a journey of mere historical reporting. It’s a personal and practical work, punctuated and driven by Myers’ own bout with cancer. The diagnosis not only took him by surprise, but it also made the question of truth personal and immediate.

In his words, “Cancer was only one of the battles I fought. The other was hopelessness.” In a world where up to 44% of young people report feeling “persistent feelings of sadness or hopelessness,” that’s something to which many can relate. Where is hope found?

For Myers, the answer was truth, and that changed everything.