Parental Rights and the “Pelvic Issues” - BreakPoint
Join us in helping to equip and renew the Church with a Christian worldview by giving before our fiscal-year ends!
Skip to content 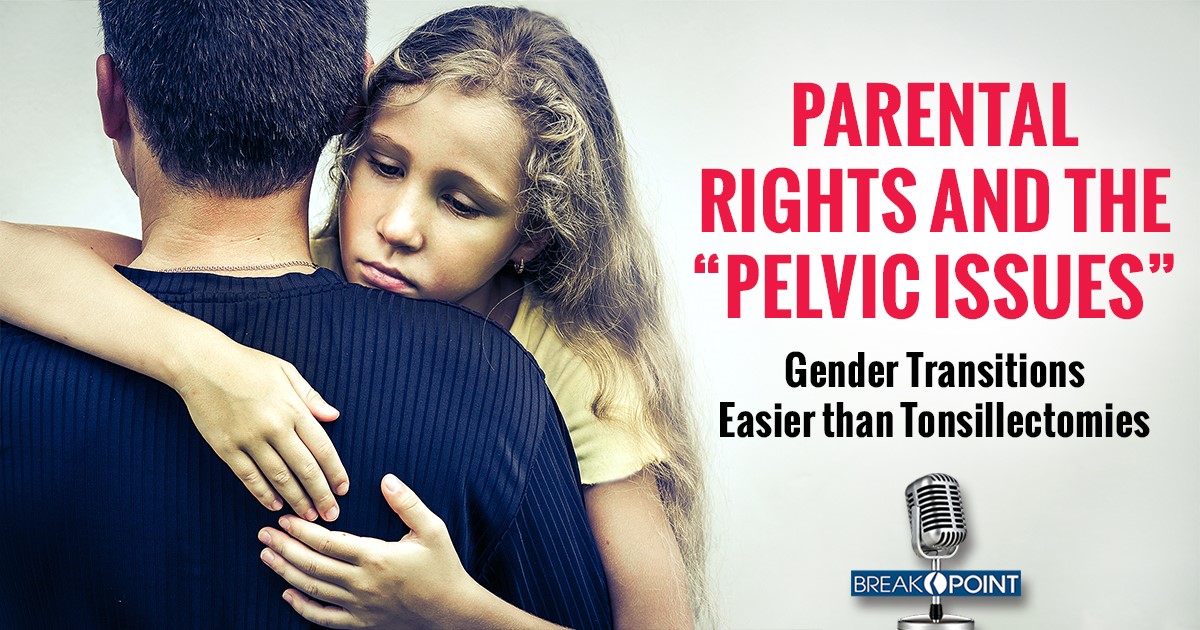 
Parental Rights and the “Pelvic Issues”

Presidential candidate Elizabeth Warren has famously compared having an abortion with getting your tonsils out. It’s not a fair analogy at all. Minors always need parental consent for a tonsillectomy, but in many parts of the country, a teenage girl can notify school officials she’s pregnant and walk into an abortion clinic without her parents ever knowing.

In fact, teenagers need permission from parents for nearly any medical procedure, and even before getting a tattoo or body piercing. However, whenever a choice has to do with sex and gender, increasingly parents are being left out in the cold, and the results are both distressing and infuriating.

Consider the recent case of Jay Keck, a dad from Chicago, whose 14-year-old daughter suddenly announced that she was transitioning to be a boy.

As he described recently in a USA Today opinion piece, four years ago, his daughter—who is on the autism spectrum—fell in with friends who convinced her she was trapped in the wrong body. She promptly renamed herself and demanded to be referred to by male pronouns. Her school obliged and shut her parents out.

According to Keck, his daughter did not even fit the current, problematic description of a child suffering with gender dysphoria. She grew up playing with dolls. She liked to play dress up. A psychologist approved by the school district even agreed her identity struggles were “driven by her underlying mental health conditions.” Yet, fearing a backlash, he would only share this opinion off-the-record.

The school ignored Keck’s requests that they use her given name, and he was horrified to discover that a social worker had told her about halfway houses for transgender teenagers, essentially encouraging his daughter to run away from home.

On meeting with the school, Keck discovered that much of their behavior was due to a fear of non-existent laws. School officials cited President Obama’s “Dear Colleagues” letter from 2016, which urged districts to affirm transgender students. Those guidelines were blocked by a federal judge three months after they were issued and have now been rescinded by the Trump administration.

The real pressure, it turns out, was coming from LGBT rights activists. For example, the ACLU sent letters to schools falsely informing them that the law prohibits them from disclosing a student’s gender identity to his or her parents.

The pro-LGBT Human Rights Campaign partnered with the National Education Association to produce materials and guidelines advocating exactly the kind of behavior this school displayed.

The sustained campaign of anti-parental-rights propaganda has also borne fruit in state-level bans on so-called “conversion therapy,” which makes it effectively illegal for mental health professionals to question chosen gender identities, even in minors.

Last year, Lisa Littman at Brown University found that 87 percent of teenagers who announced a change of gender did so after so-called “cluster outbreaks” of dysphoria online or among friends. Her research, which was quickly slammed by activists and removed from the university’s website, described transgender outbreaks like these as a “social and peer contagion.”

Now, in all kinds of ways, parents are hindered from fighting this contagion in defense of their own children.

The fact that USA Today published Keck’s piece at all is encouraging. Hopefully, it’s a call to action. Parents who’ve lost their rights need to be heard. Ultimately, parents, not school districts or the media or activist groups, must be recognized as the primary guardians of their children’s well-being. Even those of us who teach our kids at home or send them to private schools, should be fighting misinformation and bad laws like these.

In the end, it could be a matter of self-preservation. In a country where parents have more say over tonsillectomies than gender transitions, it’s unlikely the right to opt our kids out will last long.