BreakPoint: The Manhattan Declaration 10 Years On - BreakPoint
Learn how to make abortion unthinkable by giving your gift of any amount today!
Skip to content 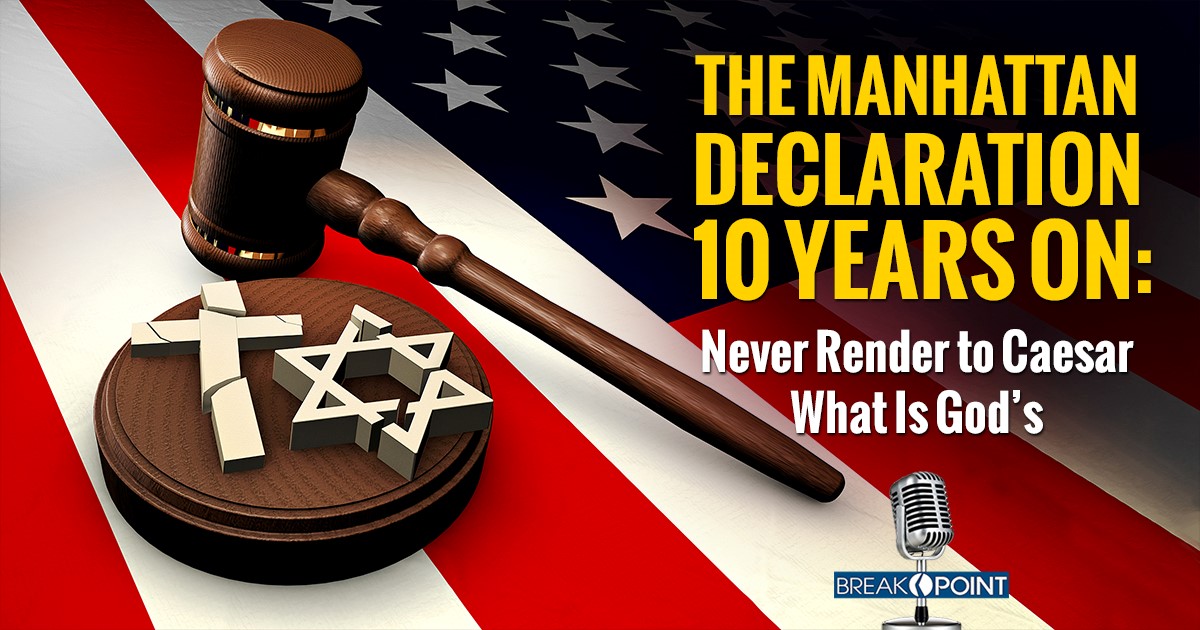 
BreakPoint: The Manhattan Declaration 10 Years On

The year 2019 is the ten-year anniversary of a statement that drew the line for Christians on three central issues: life, marriage, and religious liberty. There were many prophetic lines in the Manhattan Declaration, which was co-authored by Chuck Colson, Dr. Timothy George of Beeson Divinity School, and Dr. Robert George of Princeton University, but none were more important than the last line:  that “we will fully and ungrudgingly render to Caesar what belongs to Caesar," but under “no circumstances” could we “render to Caesar what belongs to God.” Half-a-million Christians signed on. In the ten years since those words were written, Caesar (in other words, the state) has claimed more and more of what belongs to God, especially in the areas of life, marriage, and religious liberty. Just think of New York lawmakers high-fiving each other after they ensured unrestricted abortion up to the point of birth, or the governor of Virginia advocating infanticide. Or consider that doctor-assisted suicide is now legal in seven states and the District of Columbia. And what about marriage? Recall the White House lit up in rainbow colors after the Obergefell decision mandated same-sex “marriage” on all fifty states. And think of all the stories we’ve now heard of believers forced to choose between their faith and their livelihood, or adoption agencies forced to choose between their existence and their convictions. Or business owners like Jack Phillips and Barronelle Stutzman having to go to court to fend off Caesar’s demands. Still, let’s be clear. Far more important than what Caesar demands is what Christians are willing to concede. Just this week, a new Barna survey revealed that the number of Protestant pastors who are “very concerned” about religious freedom has dropped significantly in just three years—from 55 percent to only 34 percent. This is why Christians must decide where they stand, not based on the pressure of the cultural moment, but on the rock-solid, unchanging truth revealed to us in the Story of Scripture. We cannot render to Caesar what belongs to God. I don’t think I can say it any better than Dr. Robert George did in his entry to our BreakPoint.org symposium about the Manhattan Declaration: “In the gospels, our Lord says . . .'be not afraid.’ As we stand boldly for life, marriage, and religious liberty, let us heed His admonition. It is not for us to know when or even precisely how the victories will be won. Our task and duty is simply to be faithful and obedient—to bear witness and do what is right . . . When things look bleak, we must not give up hope, for to yield to despair is to fail to trust in Jesus.” To that I say Amen. If you've signed the Manhattan Declaration, I urge you to read it again. Consider again what we must do to honor God in this culture. If you’ve not read it or signed it, I urge you to consider doing so. You can find a link to the full text of the Manhattan Declaration, as well as to our online symposium, featuring Dr. George’s comments along with those of 15 other thought leaders, at BreakPoint.org. And finally, I was pleased to work with the brilliant Dr. David Dockery on a new book, which is now available, that reflects on Christian conviction. It’s called “Life, Marriage, and Religious Liberty: What Belongs to God, and What Belongs to Caesar.” An absolutely stunning group contributed to the book, including Dr. George, Joni Eareckson Tada, Randy Alcorn, Ryan Anderson, Frederica Mathewes-Green, Michael Farris, Kristen Waggoner, Mary Eberstadt and more. It’s available at BreakPoint.org with your next donation to BreakPoint and the Colson Center. This is worth repeating: We will ungrudgingly render to Caesar what belongs to Caesar, but we can never render to Caesar what belongs to God.