Britten’s Ceremony of Carols - BreakPoint
Learn how to make abortion unthinkable by giving your gift of any amount today!
Skip to content 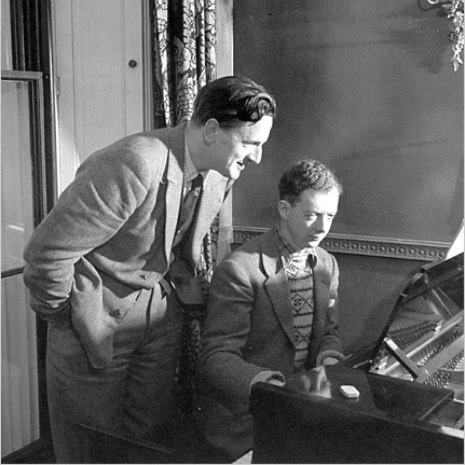 In the recent Tom Hanks movie Greyhound, the captain of a destroyer helps to lead a convoy across the U-boat-infested North Atlantic during WWII. To say that the trip from the U.S. to Britain in 1942 was dangerous is not only an understatement of epic proportions, but it offers context for the extraordinary composition of Benjamin Britten’s “Ceremony of Carols.”

Britten was arguably the most important British composer of the 20th century. In 1942, after three years in North America, he found himself in the middle of the Atlantic aboard a Swedish cargo vessel, trying to return to his native England. Instead of panicking amidst the harrowing circumstances of the dangerous crossing, he wrote two choral works: the “Hymn to St. Cecilia” and the “Ceremony of Carols.”

As the name suggests, the “Ceremony of Carols” consists of ten carols framed by the chant “Hodie Christus Natus Est” (“Today, Christ is born”) at both the beginning and the end. The carols he employed date from the fourteenth to the sixteenth centuries, and are sung in Middle and Early Modern English, as well as Latin.

One carol, “Deo Gratias” (“Thanks be to God”), sung in a combination of Middle English and Latin, tells the story of Genesis 3. While the text is primarily about the Fall, the carol’s musical energy and emphasis is on thankfulness, specifically to God for providing a Savior who sets things right.

The most beloved carol in the work is “This Little Babe.” Despite its sentimental-sounding title, the text describes the all-out battle the Babe of Bethlehem wages against Satan himself. The words were written by Robert Southwell, a Catholic priest who was hanged, drawn, and quartered by Queen Elizabeth I. Here’s how they read: “This little Babe so few days old, Is come to rifle Satan’s fold; All hell doth at his presence quake, Though he himself for cold do shake; For in his weak unarmed wise, the gates of hell he will surprise.”

Jeff Spurgeon of New York’s classical music station, WQXR, calls “This Little Babe” his “favorite Christmas carol.” In Southwell’s words and Britten’s music, says Spurgeon, the battle between good and evil is won by “a baby born in obscure poverty” and is depicted “not by a huge orchestra and massive voices, but by a harp and a choir of children.”

Britten, the man who pulled this off musically, could hardly be described as an orthodox Christian, much less a devout one. His personal life, including his sexual proclivities, was the source of numerous controversies during his life and even after his death. However, if this work, composed during a potentially deadly voyage in 1942, is any proof, he was at least a Christ-haunted man. Believe it or not, in this, Britten wasn’t unusual. So much of the West’s greatest art was inspired by Christian themes. In fact, it’s impossible to imagine the West’s cultural heritage without Christianity.

Though much of great art was created by people of unquestionable faith, such as Johann Sebastian Bach, others were produced by people whose faith is unknown, or even nonexistent.

The power these works hold to move us is, at root, the power of the story that makes the work possible–the story that explains where human creativity, like what is evident in the talent of Benjamin Britten, comes from. And in this case, to use Spurgeon’s words, the story of God’s “sneak attack on the forces of evil,” which we will soon celebrate.

A version of this commentary was aired by John Stonestreet on December 23, 2016.

My Favorite Christmas Carol (This Year)