“Pro-Choice” to “Pro-Abortion” - Breakpoint
Give today to learn what it means to be a thoughtful Christian!
Skip to content 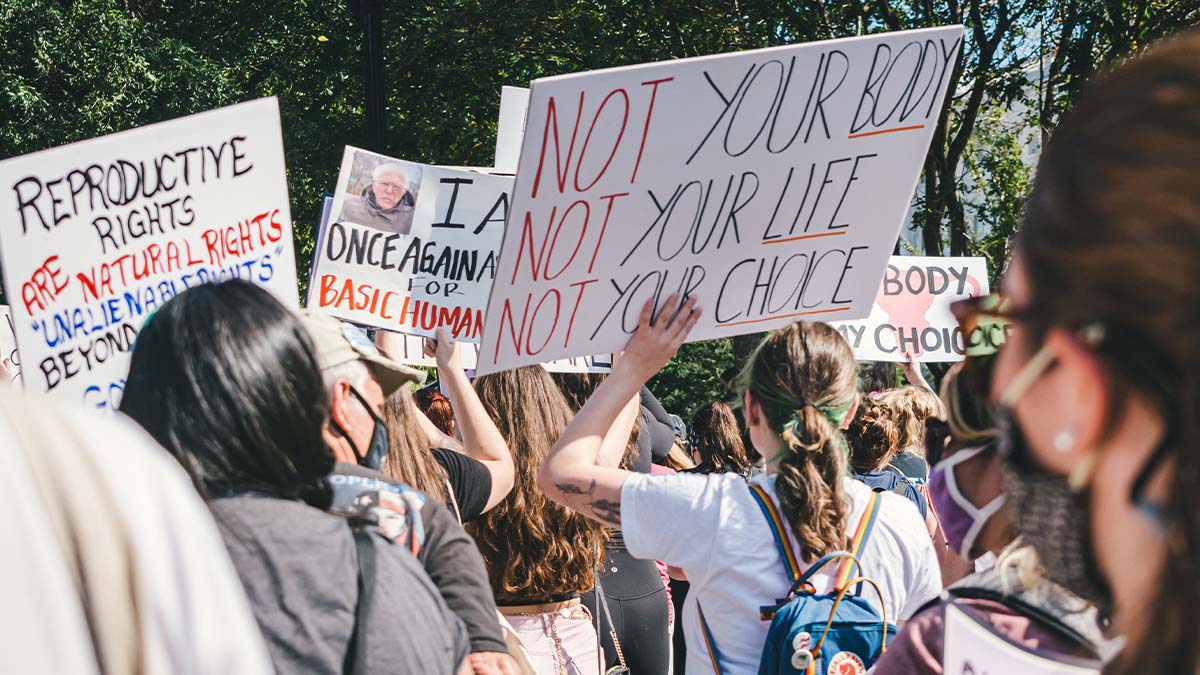 Today, the Supreme Court will hear oral arguments in a case that could upend Roe v. Wade. At the very least, Dobbs vs. Jackson Women’s Health Organization is the most significant challenge to legalized abortion to date. In question in a Mississippi law known as the Gestational Age Act.  If the court decides the law should stand, the power to determine and limit abortion rights would effectively be returned to the states.

The long battle over abortion in America has had many chapters. For years, most advocates of legalized abortion argued they were not really pro-abortion. Abortion, they claimed, was not a good thing, but women should have the right to decide whether or not to carry a baby to term. The painful decision to have an abortion, continued the rhetoric, is always tragic, but a woman must retain autonomy over her own body and health.

The preferred label for these abortion advocates, “Pro-Choice,” has always been problematic. For starters, a pre-born baby has distinct DNA and a separate body. So, abortion involves a body other than just the mother’s, and her choice is made for someone else. The baby is not given a choice.

Remarkable advances in science and technology over the years eventually dismantled claims made by early abortion advocates that the preborn are not yet human. So, the assertion shifted: preborn humans are not persons. This raised the immediate and historically fraught question of who gets to decide which human beings are persons and which are not? What non-arbitrary criteria can be used to determine personhood? And how can such criteria be applied consistently in a world where one woman mourns a miscarriage, and another deliberately causes a miscarriage?

Quite often, advocates who embrace the label of Pro-Choice label opponents of abortion Anti-Choice or, less commonly, Anti-Abortion. Our preferred term “Pro-Life” is a lie, they’d often add, since pro-lifers only care about life when it is still in the womb. Though effectively countered by the work of pro-life adoption agencies, churches, missionaries, pregnancy resource centers, philanthropy, and countless private organizations, this accusation continues to be thrown around by those who only acknowledge support if it comes via government programs.

All of the Anti-Choice and Anti-Abortion language served a rhetorical purpose for supporters of legal abortion. To avoid an unhelpful rhetorical tit-for-tat and maintain focus on the morality of abortion, the Colson Center and BreakPoint typically use the labels of “Pro-Choice” or “abortion advocates.”

In recent years, however, the rhetoric of many in the abortion movement has changed, focusing less and less on choice or on portraying abortion as an unfortunate but sometimes tragically necessary decision. President Clinton’s language of “safe, legal, and rare” is rarely heard by the political champions of abortion today. Instead, abortion is portrayed as a positive good, something to be celebrated and maybe even cheered.

In other words, the abortion movement has become less Pro-Choice and more Pro-Abortion, and examples aren’t hard to find. The “Shout Your Abortion” movement is perhaps the most egregious, attempting to normalize and de-stigmatize abortion by turning it into something to celebrate. In a recent song, Amanda Palmer laments that we don’t celebrate abortions the way we celebrate babies with parties, cakes, and flowers. Actress Martha Plimpton publicly bragged that her first abortion was her “best” abortion. Comedians like Louis C.K. admit abortion is “a little like” killing a baby before turning it into a joke.

Many celebrities have claimed that abortion made their career possible. Michelle Williams advocated for abortion after receiving a Golden Globe, Uma Thurman did the same in The Washington Post. Busy Philips praised abortion in a memoir, Alyssa Milano in People magazine, and most recently (and most bizarrely) Cecily Strong in the person of Goober the Clown in a not-funny comedy sketch on Saturday Night Live.

Michelle Wolf said that her abortion made her feel “like god,” and Lena Dunham has said that she wished she had an abortion so she could better promote it. Miley Cyrus announced her collaboration with Planned Parenthood by posting a picture licking a cake that read, “ABORTION IS HEALTHCARE.”

Of course, we expect celebrities to be a bit over the top, but if abortion is healthcare, shouldn’t it be celebrated? New York lawmakers thought so, as did Governor Cuomo when he ordered the spire on One World Trade Center and other New York Landmarks be lit up in pink.

It’s clear that abortion, at least for many, is no longer considered a difficult, painful, and morally fraught choice. It’s considered heroic, a positive good to be celebrated. That’s why Breakpoint now uses the term Pro-Abortion when it is accurate. And, more importantly, it’s why even if the Supreme Court ruling in Dobbs v. Jackson Women’s Health effectively overturns Roe v. Wade, the work to protect vulnerable pre-born life is far from over. After all, the goal is not merely that abortion becomes illegal in some places, but that it becomes unthinkable everywhere.