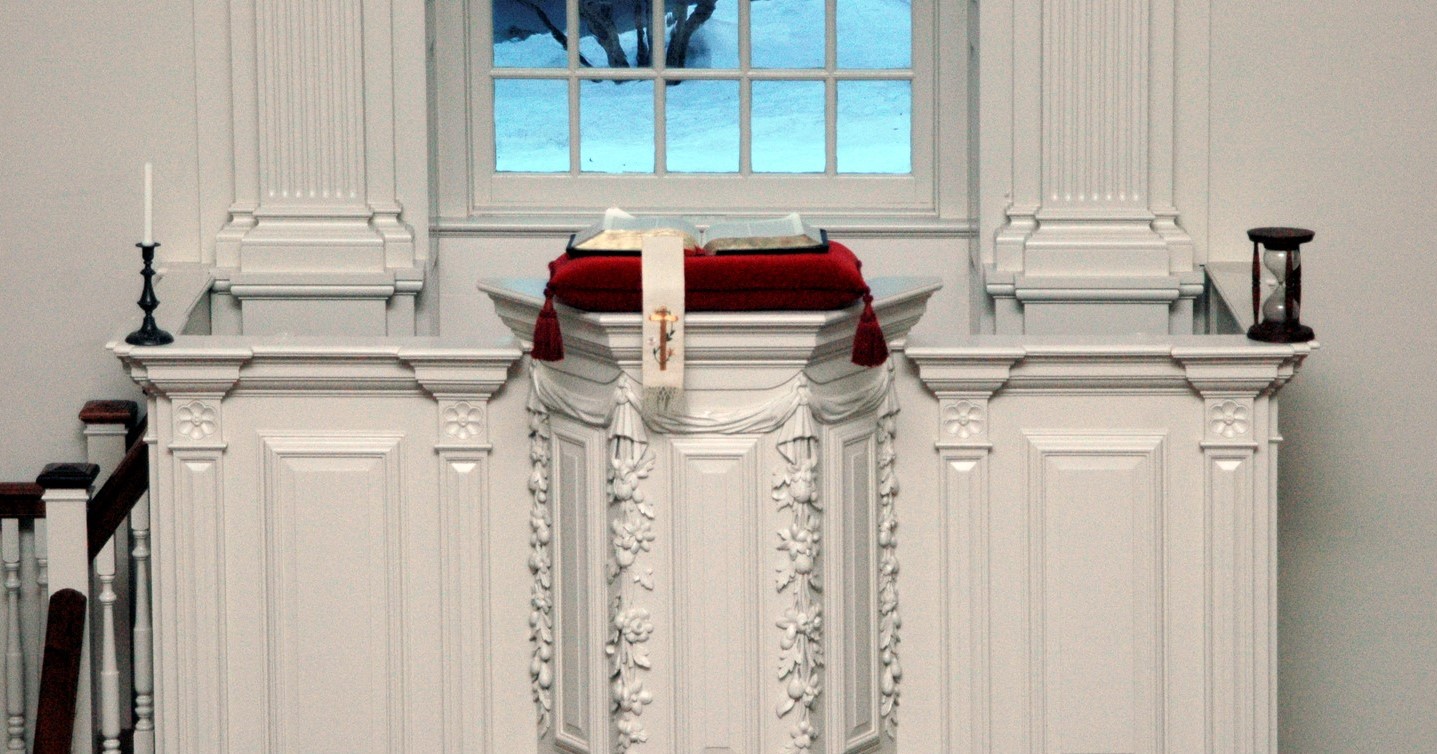 
The Puritan Pulpit and the Christian View of Life

Throughout history, church architecture has been intended to make theological statements, to provide a proper atmosphere for worship, and to teach worshipers important lessons about their faith. The best-known examples of this are medieval cathedrals, with their stained-glass windows and statuary that were seen as “books” for the illiterate. In fact, nearly everything about the cathedrals was thick with multiple layers of meaning which are rarely understood or appreciated today.

During the sixteenth century, Reformed Protestants rejected the Roman Catholic tradition of church decoration. Ulrich Zwingli, for example, had the statues, stained glass windows, and organs moved out of the churches and the walls whitewashed. The reason was a new theology of worship: Roman Catholic worship was a multi-sensory, liturgical drama; in Protestantism in general and the Reformed tradition in particular, worship was centered on the preached word, and for Zwingli, anything that might distract from that had to be ruthlessly eliminated. Art and musical instruments could be a distraction, so they had to go.

The English Puritans took the rejection of art and artifice to new heights, developing an approach to preaching that emphasized “plain and simple” exposition of Scripture with few rhetorical flourishes. This carried over into their architecture in their churches in the New World. Some of those churches still stand with their interior design largely intact.

To the eighteenth-century mind, the hourglass and the candle were both memento mori, reminders of the shortness of life. Candles burn down and out; the sands run through the hourglass; our time in this world likewise is short.

My church, the First Church of Christ in Wethersfield, Connecticut, was “gathered” in 1635. The congregation worships in the 1761 “Meeting House.” Although it had been updated to a Victorian worship space, in 1961 it was restored to its original appearance, with plain glass, whitewashed walls, and very little decoration, in keeping with the Puritan vision of wanting “plain and simple” exposition of Scripture in a setting devoid of distractions. The original pulpit was even found and returned to its place in the meeting house.

The pulpit is on the north wall of the meeting house. You enter it from a stair to the left of the pulpit, and you preach beneath a sounding board suspended from the ceiling. The location of the pulpit is mostly a consequence of acoustics. Medieval cathedrals, for example, often had pulpits above the nave of the churches to allow more people to see and hear the preacher. The Meeting House was designed with the same thing in mind, to allow the preacher to be heard by all without amplification.

Although the Meeting House has only limited decorations, the pulpit itself has a few visual features that are worth noticing. In the center is a raised lectern with a large open Bible on it. To the left as you face the pulpit a candle sits on the pulpit box, and to the right an hourglass. Although people frequently think these have mundane uses, for things like light to read the Bible and for timing the sermon (as if a Puritan preacher would care!), the reality is something far more serious and profound.

To the eighteenth-century mind, the hourglass and the candle were both memento mori, reminders of the shortness of life. Candles burn down and out; the sands run through the hourglass; our time in this world likewise is short.

We today do our best to avoid thinking about our own mortality and to insulate ourselves from death. People who lived in the early modern era (roughly 1500-1800) did not have that luxury.

We today do our best to avoid thinking about our own mortality and to insulate ourselves from death. People who lived in the early modern era (roughly 1500-1800) did not have that luxury. Indeed, death was an everyday event for them. Infant mortality rates were high, and disease regularly killed people of all ages. People died at home and were prepared for burial by their own family members. Some colonial houses even had a coffin door in the kitchen to allow the bodies of deceased family members to be moved in and out more conveniently.

Perhaps because of the closeness of death, early modern Europeans were vitally concerned with how they spent their lives, and so memento mori were common. For example, many still life paintings include skulls, decaying fruit, extinguished candles, watches, …. All were intended to remind the viewer of the passing of time and the transiency of life.

But between the candle and the hourglass on the pulpit lies the Bible, and behind that stands the preacher. Even as they were reminded of their mortality, the written and preached word was to be a source of comfort and instruction for them they proclaimed the hope of eternal life. But the layout of the pulpit was also a warning: death will come for each of them, and how they spent eternity would depend on what they did with the Bible and how well they listened to and applied what they hear in the sermon.

The memento mori also served as a warning to the pastor to be careful what he preached, since the eternal souls of his congregants could well depend on his words. Time was running short for everyone; there was none left for entertainment or fluff. Rather, the pastor was to preach with passion and all seriousness the full council of God, holding nothing back. Only by so doing could he discharge his duties and hope to receive God’s commendation.

The Puritan pulpit was thus a visible expression of Moses’ prayer in Ps. 90:12: “So teach us to number our days that we may get a heart of wisdom,” a warning to the congregation and the pastor alike of the importance of our days as preparation for eternity.

Knowing church history gives us perspective on our own worship, theology, and practice. The Puritan pulpit challenges our view of ourselves, our time, and the Bible and reminds us of the significance of our brief time on earth as preparation for eternity. What will our worship spaces and practices tell future generations about our priorities, and is that the message you want to pass on to enrich them and as a memorial to our faith?