Benjamin Watson, Tulsi Gabbard and Frank Wolf on the Slaughter of Christians in Nigeria - BreakPoint
Skip to content 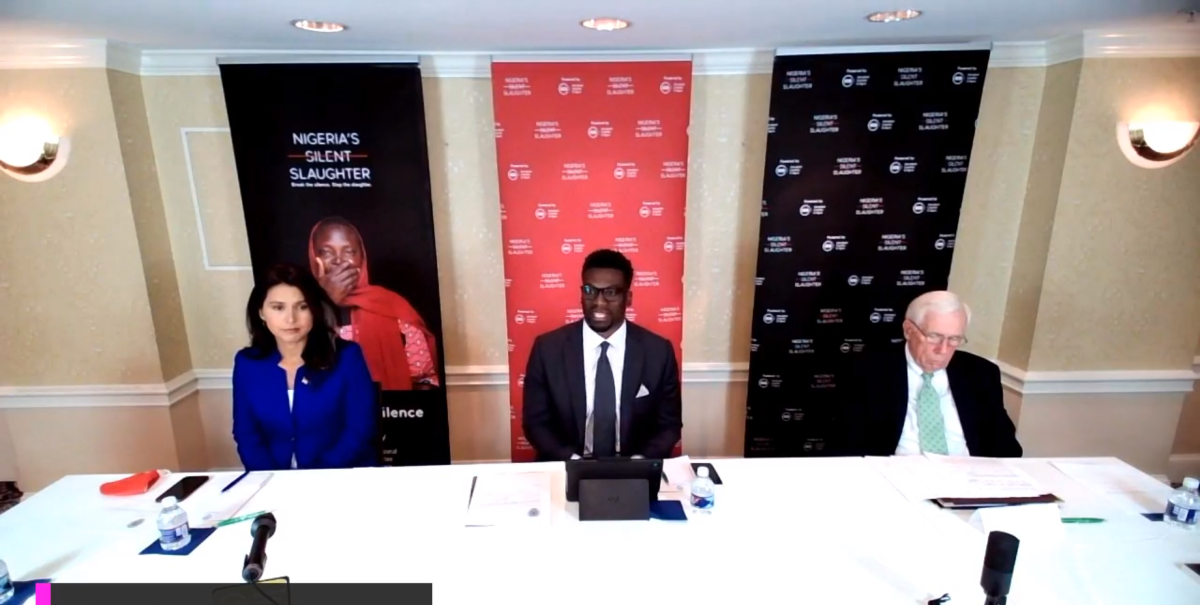 
Benjamin Watson, Tulsi Gabbard and Frank Wolf on the Slaughter of Christians in Nigeria

On Wednesday of this week, I was honored to participate in a media event, along with former U.S. Representative Frank Wolf, current U.S. Representative Tulsi Gabbard, former Super Bowl star Ben Watson, and Stephen Enada, president of the International Committee on Nigeria (ICON). The targeting of Christians in Nigeria, for persecution, abduction, and death, is so dire, it’s been labeled “genocide” by observers both inside and outside the country.

Especially in northern Nigeria, Christians are under a sustained, brutal assault by two groups bent on their destruction: The Islamist terror group Boko Haram and Fulani militants motivated by a mixture of Islamist ideology and greed for land. On any given day, Christians are killed, raped, and kidnapped.

An interactive calendar on the ICON website offers a documented summary of how many Christian have been victimized each day since December of last year. As I mentioned in my comments for the panel, this campaign against believers has been going on for years, but the calendar offers a visual picture that the persecution of Christians in Nigeria is as recent as last week. For example, just last week, over 20 Christians were killed and over 60 abducted.

As Stephen Enada, leader of ICON and host for Wednesday’s panel, told me recently on the BreakPoint Podcast, Nigerian Christians are in the midst of an “existential crisis.” In addition to those killed, there are more than 3 million displaced Nigerians. Women and children are being trafficked to Europe.

Yet the Nigerian government has embraced a policy of indifference, if not complicity. At most, they arrest a few perpetrators, declare them “de-radicalized” after a short while, and send them back into the community. Many continue to prey upon their Christian neighbors.

This is why every member of Wednesday’s panel called for external pressure. The Nigerian government must be pressured by the international community, especially the government of the United States of America. Creating that pressure is the mission of ICON. Their comprehensive report, “Genocide in Nigeria,” offers the full, heartbreaking picture of what is happening in Africa’s largest country. You can get a copy on their website.

Wednesday’s event was designed not only to inform media about ICON’s activities and resources, but to press for action while offering possible ways the U.S. might pressure the Nigerian government to act.

After pointing out that more Christians have been killed in Nigeria than Islamists have killed in Syria and the rest of the Middle East, former Representative Frank Wolf urged the Trump Administration to appoint a special envoy for Nigeria. In addition to working with the U.N. and NGOs to coordinate all efforts to confront the crisis, a special envoy will send a signal that the United States is serious about the problem and is willing to put its sizeable weight to work in order to address it.

Enada seconded Wolf’s recommendations, saying that “it’s more important than ever that the U.S. government act to resolve this crisis. A special envoy,” he said, “with the full backing of our federal government, would have the power to hold perpetrators accountable.” Representative Tulsi Gabbard, a Hindu, voiced her support for these kinds of efforts as well. Too often, she said “these attacks go unnoticed,” but Americans must “join our voices against the systematic slaughter of Christians.”

Former Super Bowl Champion Ben Watson struck perhaps the most inspirational note of the event. “If we are silent about [what’s happening in Nigeria] we are in some way complicit.” He then linked the campaign for justice in Nigeria to the campaign for racial justice here at home: “This shouldn’t be limited to our shores . . . we must raise a voice against violations around the world.”

Please, click on this link to the video of the event. We urge you to share it widely on social media and send it to your representatives in Congress.

And please, pray for our brothers and sisters in Nigeria. As I said at the event on Wednesday, and I’ll say it again, praying is doing something. Primarily, prayer aligns our hearts with the heart of God. And, make no mistake, the heart of God is aligned with our brothers and sisters who are being persecuted. The more we pray the less we will tolerate silence about their persecution.

Turning a Blind Eye to Nigeria’s Genocide: A Conversation with Stephen Enada